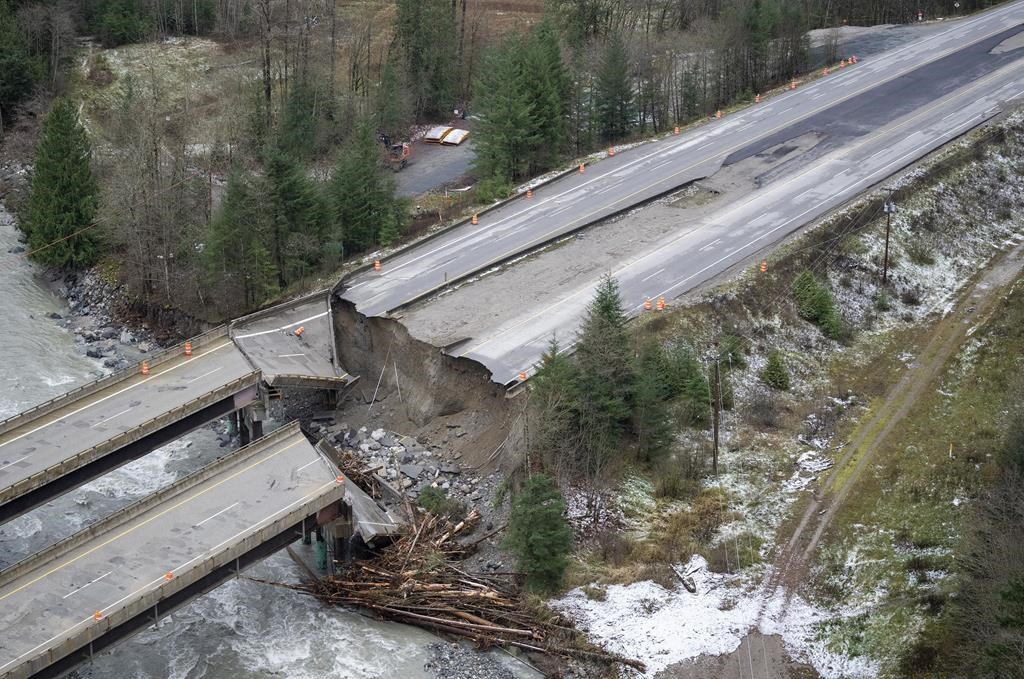 Damage caused by heavy rains and mudslides earlier in the week is pictured along the Coquihalla Highway near Hope, B.C., on Thursday, November 18, 2021. File photo by The Canadian Press/Jonathan Hayward
Previous story

A key highway link between British Columbia's Lower Mainland and the rest of the province will reopen to essential traffic by the end of the day on Monday, five weeks after it was heavily damaged by severe rainstorms.

Transportation Minister Rob Fleming said the pending reopening of the Coquihalla Highway is "one of the most remarkable engineering feats in recent memory in the province of British Columbia."

He said the response by contractors and engineers to repair the route is as unprecedented as the storms that damaged it in the first place.

At least 20 separate sites were torn up, destroyed or washed away on the route, including seven bridges that were either undermined or collapsed.

Commercial trucks and intercity buses will be the only vehicles allowed to use the route, resuming transportation of goods and services, he said.

"The exact time of day will be determined over the next few days as we complete some final pieces of work that are needed for that reopening including some paving," Fleming said at a news conference Wednesday.

Permanent repairs and fixes to the Coquihalla Highway will take time and more information will be given in the new year, he noted.

“This is a significant milestone for our supply chains that will have economic benefits for all British Columbians who've seen supply chain interruptions and indeed for a connection to the rest of the country,” he said.

Paula Cousins, regional executive director for the Ministry of Transportation, said while the highway will be open, "it is not the Coquihalla as we know it. "

Some sections of the route will be one lane in each direction and power still hasn't been restored, so truckers will only have lighting in the snow sheds and brake checks with the use of generators, she said.

There'll be reduced cellphone coverage, electronic vehicle charging stations will not be functional and commercial drivers can expect reduced speed limits, she added.

Highway 3 has been the main route available into the Interior of B.C. since a series of storms swamped the southern part of the province.

Fleming said the essential travel designation will be lifted for Highway 3 a day after the Coquihalla Highway reopens.

Caution is needed when driving on Highway 3, he said.

"It's a safe route as long as people are prepared, responsible and drive to the conditions, but it's a mountainous route."

Highway 99, where four people died in a mudslide and one remains missing, will also be opened for general travel starting Monday, although commercial vehicles won't be allowed on the road between Pemberton and Lillooet.

Earlier Wednesday, a panel of engineers said better forecasting and co-ordination could help prepare British Columbia for natural disasters, while they warn the spring thaw and rain may compound damage caused by recent floods.

The experts from the University of British Columbia shared their preliminary observations on November's floods, with geotechnical engineer Jonathan Fannin warning that snowmelt in the spring could add new pressure to dikes, highways and bridges.

"I think it's in the back of our minds as the next expected demand on our system," he said.

Spring thaws were responsible for the most catastrophic flood events in the Fraser Valley before the flooding this fall, Fannin said. They more commonly affect the Fraser River, not the Sumas River, which spilled onto farmland in Abbotsford.

In Merritt, which was ordered to evacuate last month, spring thaws are responsible for about 70 per cent of flood events, though they tend to be less severe than fall flooding, said Steven Weijs, an expert on hydrological modelling.

"Now we're, of course, in a special situation because we have damaged infrastructure, which is more vulnerable," he said.

Transportation engineer Amy Kim says there are also lessons from the floods that can be applied, including planning alternate routes.

When it comes to preparations, Fannin said British Columbia can learn from places like Hong Kong and Rio de Janeiro, where centralized warning systems protect the public from hazards and storms.

"These risk-based decisions are made at individual sites for individual hazards," he said, noting the panel itself was an example of how hazard experts from different fields could come together.

This report by The Canadian Press was first published Dec. 15, 2021.