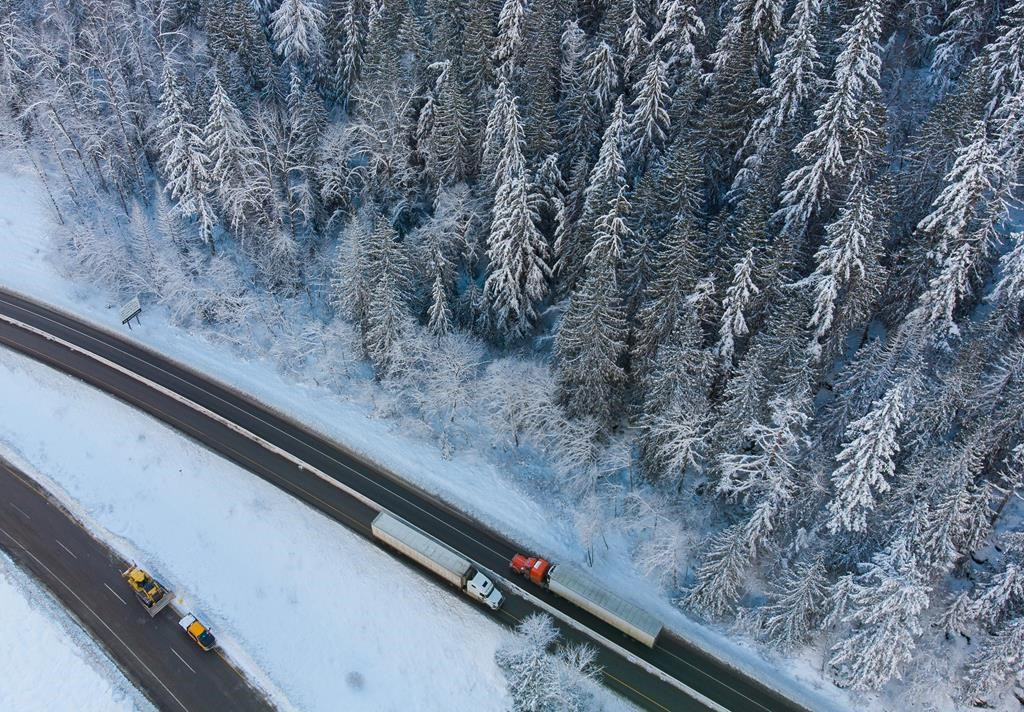 Transport trucks hauling trailers travel on the northbound lanes of the Coquihalla Highway after it was reopened to commercial traffic, at Othello northeast of Hope, B.C., on Dec. 20, 2021. Photo by The Canadian Press/Darryl Dyck
Previous story

British Columbia's "hobbled" supply chains received a major boost with the reopening of the primary transport route for goods heading to and from Metro Vancouver, a spokesman for the trucking industry said.

The Coquihalla Highway between Hope and Merritt reopened ahead of schedule Monday to commercial traffic and intercity buses.

It had been closed since mid-November after severe washouts and floods damaged the four-lane route in numerous areas.

"The uncertainty we've had for the past month is what's really hobbled the industry," said Dave Earle, B.C. Trucking Association president, who travelled to Hope to participate in a reopening event.

"They're telling us it's about 45 minutes to one hour extra," he said of travel time on the route.

"The road is reopened for limited movements, and to be sure, it is not like the Coquihalla was. There are stretches where it's one lane of traffic in each direction, with speed limits of 60 (kilometres per hour)."

But the route is safe and the repair job that was done over the past month is "nothing short of absolutely spectacular," Earle said.

The Coquihalla, also known as Highway 5, opened ahead of schedule after it was closed to all traffic on Nov. 14, Transportation Minister Rob Fleming said.

Crews repaired and patched about 20 stretches of the highway over 130 kilometres, including seven collapsed or washed-out bridges, he said in a statement.

"The people who build and maintain roads in B.C. have a reputation second to none, and their response to the recent disaster has been remarkable," said Fleming.

"Ministry teams, maintenance contractors and hundreds of workers going flat out in challenging conditions have allowed us to reopen the Coquihalla Highway today, giving B.C.'s commercial drivers a safe, efficient route between the coast and Interior."

Fleming had originally forecast the highway would not reopen until late January at the earliest.

More than 300 workers using 200 pieces of equipment moved over 400,000 cubic metres of gravel, rock, and other material to repair and reopen the highway in 35 days, the ministry said.

Earle said having the use of the Coquihalla Highway brings more predictability to the movement of goods through B.C.

"It's a game changer," he said. "If companies can reliably move loads in a reliable time frame they can plan better. We can get those efficiencies back into the supply chain."

With most commercial vehicles now moving to the Coquihalla Highway, Fleming said travel restrictions will be lifted from Highway 3 on Tuesday, allowing the route between Hope and Princeton to be used for non-essential travel.

Restrictions have also been lifted on Highway 99 from Pemberton to Lillooet, but large commercial vehicles are still not permitted on that section of the route, he said.

Fleming said the repairs to the Coquihalla Highway are temporary and commercial drivers should be prepared for reduced speed limits and pattern changes.

He also cautioned that highways 3 and 99 are mountainous routes where weather can change quickly and drivers should be prepared for winter conditions.

The Trans-Canada Highway in parts of the Fraser Canyon near Boston Bar remains closed due to flood damage and Highway 8 between Spences Bridge and Merritt is completely closed due to the impacts of flooding.