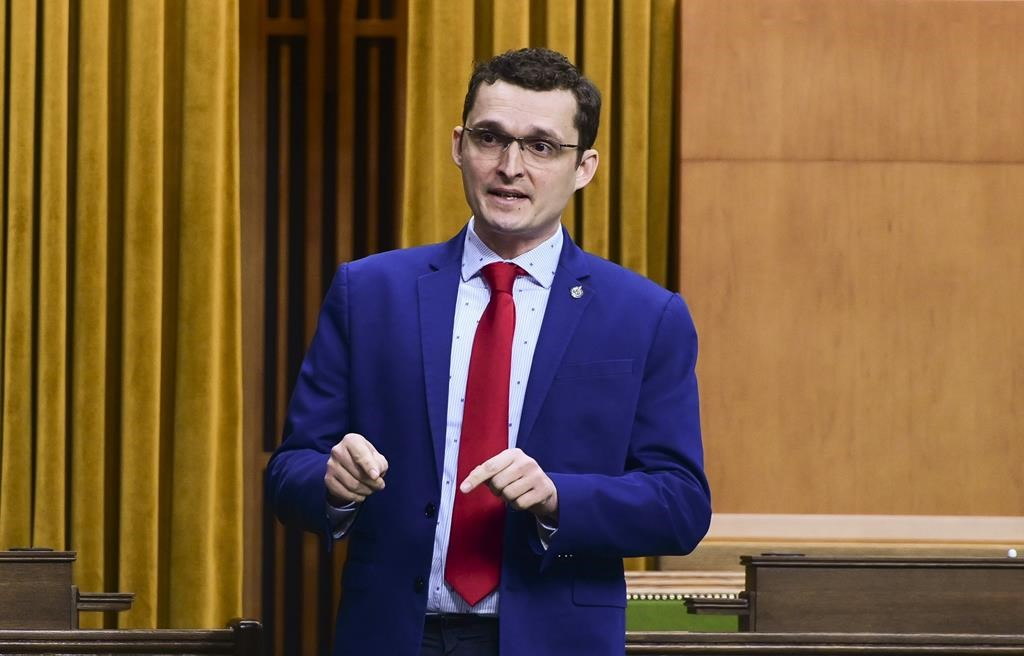 Conservative member of Parliament Tom Kmiec rises during question period in the House of Commons on Parliament Hill in Ottawa on Friday, March 26, 2021. File photo by The Canadian Press/Sean Kilpatrick
Previous story
Next story

A Liberal minister struck a last-minute deal with the Conservatives before the holidays to extend bereavement leave for grieving parents who work in federally regulated industries.

Tory MP Tom Kmiec, whose daughter Lucy-Rose died at only 39 days old in 2018, has been trying to change the law to give parents who have a stillborn baby or lose a child more time off work to grieve.

The Calgary MP introduced a private member's bill before the recent general election in an attempt to extend bereavement leave, but, like most private bills, it did not become law.

Since he started his campaign, the MP for Calgary Shepard has been contacted by people across Canada who suffered a stillbirth or lost children, including other MPs.

Kmiec said thousands of parents, shattered by grief but forced to go straight back to work, wrote supporting his call to change the law to allow them more time at home to mourn.

“I experienced it first hand, and read so many stories of people who were so deep in their grief they could not work,” he said.

Last week in the House of Commons, Liberal MP Brenda Shanahan revealed that 30 years ago she had given birth to a stillborn daughter and that, at work, “people had a hard time understanding” what she was going through.

Kmiec noted in Parliament recently that several MPs including Immigration Minister Sean Fraser have lost children. In December 2019, Fraser shared how his newborn daughter Ruth had died in her mother's arms.

Hearing Kmiec and other MPs speak of their personal tragedies prompted members from both sides of the House to work together to see if they could make Kmiec's proposals — widely supported in Parliament — become law.

In a rare outbreak of cross-party co-operation days before MPs paused for the holidays, Labour Minister Seamus O’Regan and Tory labour critic Scott Aitchison struck a deal to ensure Kmiec’s proposed law change would make it to the statute book.

O’Regan told The Canadian Press that such an agreement, to transpose an opposition MP’s private bill into law, was a “rarity” and that he had “been in this racket long enough to know this doesn’t happen very often.”

The minister added key clauses from Kmiec's bill into a government bill known as C-3, which was in the final stages of passage through the House.

“It became evident to me that because of Mr. Kmiec’s personal tragedy that the entire Commons felt very strongly about it,” O'Regan said. “I know they were coming to me with something that meant a lot and was born from a very personal tragedy.”

According to Kmiec, the last-minute deal with the government was brokered by Aitchison, who had the idea to personally approach O'Regan.

“There were intense negotiations. They made an offer that if they accept to put in bereavement leave, that we would expedite the bill,” Kmiec said.

Under the change, which received royal assent last week, grieving parents working in federally regulated industries, including the postal service, airlines, banks and railways, would get eight weeks unpaid leave. Previously, bereaved parents, including those with stillborn children, had a combination of five paid and unpaid days leave.

Parents who have a stillborn baby after 20 weeks gestation and those who lose a child under 18, or a disabled child regardless of their age, will qualify for the extended bereavement leave.

Kmiec’s daughter, with a rare chromosomal condition and a hole in her heart, had a caesarean birth. The MP said he had no inkling until the day before she was born that Lucy-Rose had any health problems.

He said in an interview the experience of losing her was devastating for himself and his ex-wife who had a career making baby products.

Kmiec said not only did he not have a proper chance to grieve but many well-wishers, knowing he and his wife had been expecting a baby, offered their congratulations after her birth, and the MP had to relay the tragic news dozens of times.