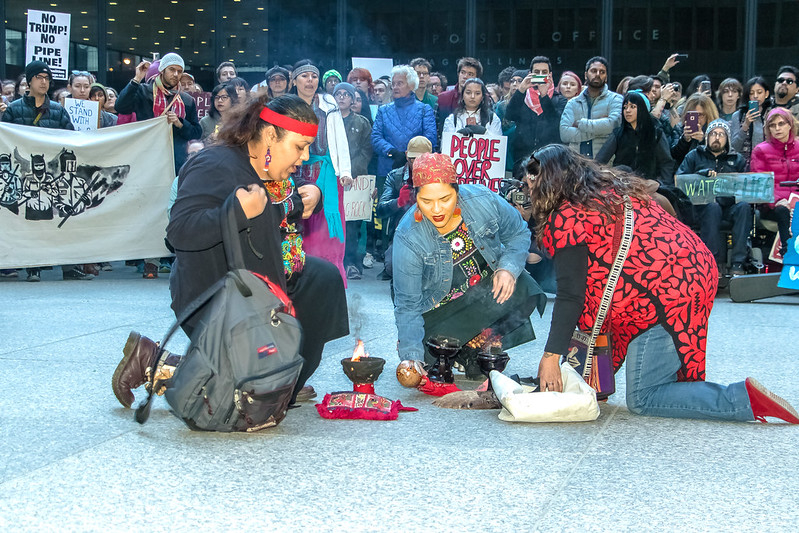 A protest against the Dakota Access Pipeline in Chicago on Nov. 12, 2016. Photo by Bob Simpson /Flickr (CC BY-NC-SA 2.0)
Previous story

BISMARCK, N.D. (AP) — A federal judge has sided with local law enforcement in a case brought by Dakota Access Pipeline demonstrators alleging excessive use of force by police at a protest site in North Dakota in 2016.

The Bismarck Tribune reported that temperatures dropped below freezing the night of Nov. 20 as police and protesters faced off on a highway just north of the Standing Rock Sioux Reservation. Officers sprayed protesters with water during the incident.

Attorneys for the protesters who brought the suit say police fired rubber bullets and exploding munitions “indiscriminately into the crowd” and also used tear gas. Some of the demonstrators were injured that night.

Lawyers for law enforcement, including Morton County Sheriff Kyle Kirchmeier, say officers were outnumbered and were concerned for their lives and safety. They sought to have the protesters’ legal claims dismissed.

Morton County Assistant State’s Attorney Gabrielle Goter said in a statement that she was pleased with the ruling.

An attorney for the plaintiffs did not immediately comment on the case. The lead plaintiff is Vanessa Dundon, a member of the Navajo Nation whose eye was injured the night of the incident.