Movies: a Harry Potter reunion, a curio from Vancouver 40 years ago, and my picks for best of 2021 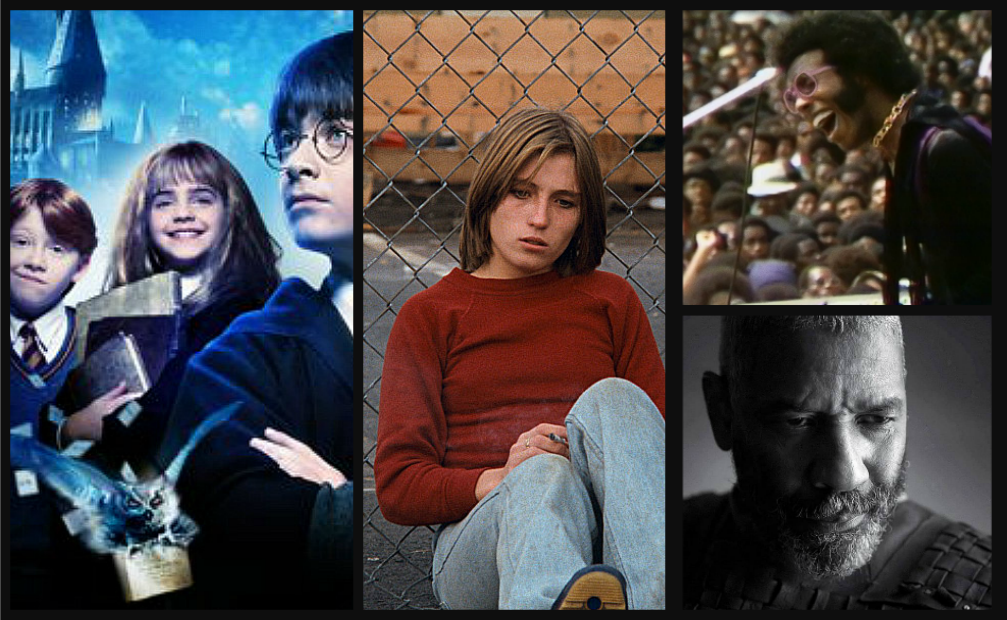 I've got my 10 best list today. You could Google “just-watch Canada” to see who is streaming them or try these other choices. Vancity Theatre is showing its own picks for the best, two of which agree with my list, and The Cinematheque is commemorating the work of India's masterful director Satyajit Ray. This year marked the 100th anniversary of his birth. The theatre is showing his acclaimed Apu Trilogy, which Martin Scorsese said was “one of the great cinematic experiences of my life.”

The Book of Boba Fett: 4

HARRY POTTER 20TH ANNIVERSARY: RETURN TO HOGWARTS: First reaction: surprised to think that it's now 20 years since the first film came out. Second: no surprise that HBO MAX would produce a reunion special like this after the great success of the Friends reunion it gave us earlier. Third: how interesting and charming a film this is. Even skeptics will enjoy the background stories it gives us, much like a "making of" feature on many movies' DVDs. Fans will revel in all that and in the pure nostalgia brought on by the many clips from the films, backstage scenes and original audition tapes.

The producers brought many of the actors back to talk about their experiences, Daniel Radcliffe, Rupert Grint, and Emma Watson, of course, recalling that they were just children, and playing together on set at the first film, bonding as close friends as seven more were made. They admit to occasional doubts about whether they could continue. Emma was shocked by the impact of fame on her life. Other actors tell stories, too: Helena Bonham Carter (most lively), Robbie Coltrane, Ralph Fiennes, whose daughter insisted he not pass up playing Voldemart, Jason Isaacs, Gary Oldman, Tom Felton, and others. And also the directors, starting with Chris Columbus, light and friendly, and then others who were brought in as the films got darker. We learn a lot. How to film Quidditch, for instance, a game that doesn't even exist. Who got broken ribs in a fight scene. Rupert's first dance "with a lady," Maggie Smith it turns out. The effect of all these memories, theirs and ours, is genuinely moving. (On CRAVE, starting Jan. 1). 4 out of 5

OUT OF THE BLUE: You have another chance to catch this all-but-lost film that Dennis Hopper made in Vancouver back in 1980 and that critics like Roger Ebert declared a masterpiece. I don't go that far because it's so uncomfortably real in depicting a rebellious teen's life that it's unpleasant to watch at times. But it does get right into the punk rock scene in the city at the time and features a tremendous acting performance by Linda Manz. She's cocky, self-assured on the outside; unsure and vulnerable down inside.

Hopper plays her dad, back from a few years in jail, and Sharon Farrell plays her mom, who works in a cheap diner and offers insights like, there are two types of men, the wild and the providers. Manz adores the dad even though he can't get a good job and carries a secret. It's her we watch most of the time, maybe at punk shows. The Pointed Sticks do two songs at one, a treat in itself. Jim Byrnes performs at a party and Tom Lavin contributed music. It's a time capsule and has a history. Hopper, who followed Easy Rider with the dud The Last Movie and then 10 years out of the business was hired to act in this Canadian movie and ended up rewriting and directing it. To him, it's about families falling apart. Manz demonstrates the result, endearing one minute, spouting punk invectives the next. Idealism gives way to nihilism. (Playing Thursday at The Polygon Gallery, at the foot of Lonsdale in North Van. Admission by donation but you have to RSVP. 3 out of 5

DRINKWATER: This was just named the audience favourite at the Whistler Film Festival, both in theatre and online. You still have today to catch it online from there or wait until it comes back for a regular booking. It's sure to. It's that entertaining and very, very Canadian. Better yet, it has an endearing and quirky sense of humour.

It's set in Penticton where Mike Drinkwater (played with ease and style by Daniel Doheny) can't seem to fit in. He dreams of a high school girl (Chloe Babcook) who is totally out of his league, president of the student council, top student, beautiful, and all that. Also, she's already claimed by a self-important jock whose dad runs a car dealership. Mike's dad (Eric McCormack) only sits at home defrauding an insurance company with a work-related injury claim. Mike makes two moves, though: he volunteers at the student council and trains for a marathon in hopes of beating out the jock who brags he's destined to win. Awkward scenes become comic, dialogue is snappy ("At least we're not a plutocracy run by big pharma," he tells some visiting Americans) and Canadian motifs abound: Tim Hortons, a Zamboni, and songs from Loverboy, Trooper, Doug and the Slugs, Corey Hart and many others. Montreal-born but Hollywood-gone Stephen S. Campanelli directed. (WFF website.) 3½ out of 5

THE BOOK OF BOBA FETT: No surprise, after The Mandalorian was such a big hit that Disney would spin out another Star Wars series. The bounty hunter Boba Fett is up now. He was already a fan favourite from his brief appearances in the movies and he gets to stretch out in this seven-part series. The episodes are only about 40 minutes long, but the production values are high. So is the action. There are fights with guards, sand creatures and guys with translucent shields. There isn't even any dialogue until 12 minutes into this first episode.

Temeura Morrison as Boba and Ming-Na Wen as Fennec Shand arrive at a desert city (looking very Middle Eastern) to "preserve" (make that, take over) "the empire" of Jabba the Hutt. A woman played by Jennifer Beals sort of welcomes him and he resolves to rule with respect, not fear. A very busy adventure (for such a short film) ensues and will surely please fans, even though the Star Wars saga is getting very long and just keeps going on and on. Jon Favreau created and wrote the series and Robert Rodriguez directed this opener. Morrison makes a very solid impression playing the lead. (Disney+) 4 out of 5

BEST OF 2021: For all the setbacks on the movie scene this year, there have sure been a lot of very good films. I haven't been able to keep my list to 10 even though I haven't included some strong contenders, like Flee and Cyrano. Except for brief festival plays, they haven't been here yet. And thinking back to the early months, films like Nomadland, Minari and Judas and the Black Messiah are this year's also but already feel so long ago.

SUMMER OF SOUL: Great music, rediscovered film from 1969 and terrific editing brought the movie that gave me more joy than any other this year. Just watch Mahalia Jackson and Mavis Staples doing an amazing duet and you'll be hooked. Plus lightly drawn into the background, the emerging politics of America's Black population.

LICORICE PIZZA: This charmer depicts young love growing despite the cynics and hucksters of Los Angeles. It's sweet, stars two new actors and is written and directed by Paul Thomas Anderson with humour and a great deal of empathy and insight.

THE TRAGEDY OF MACBETH: Tersely presented and staged in crisp black and white by the Joel half of the Coen brothers duo, this film puts new energy into the Scottish play and lets Denzel Washington, Frances McDormand, Brendan Gleeson and others do wonders with the words.

THE POWER OF THE DOG: Benedict Cumberbatch becomes an American cowboy and delivers. He's toxic and then not, making the shift effortlessly. Jane Campion's film dulls some of the novel's content but engrosses mightily anyway.

WRITING WITH FIRE: A celebration of journalism under extreme difficulties, this film shows courageous reporting by women in India who also happen to be dalits (untouchables). Watch them confront the powerful. Also, from very early this year, there's a story of fearless journalism that turned tragic. THE DISSIDENT explores the case of Jamal Khashoggi, the writer for the Washington Post who was killed in the Saudi consulate in Istanbul, Turkey. This is a hard-hitting investigation and turns up strong evidence about how and why he died.

DRIVE MY CAR: This mesmerizing and moving film from Japan follows a theatre director to helm a presentation of Chekhov's Uncle Vanya and shows exactly what he means when he says that Chekhov “drags out the real you.“

WEST SIDE STORY: Close to but not quite a match to the 1961 version, Steven Spielberg's take on the great musical is invigorating, lively and thrilling anyway. And Latinos play Latinos this time.

BELFAST: Family love survives the tension, unrest and violence of the growing “troubles” in Northern Ireland in Kenneth Branagh's film drawing on his own memories of growing up there at that time. It's got a warm heart and lots of humanity. Nine-year-old Buddy (Jude Hill) is a standout alongside the likes of Jamie Dornan, Caitriona Balfe, Judi Dench and Ciarán Hinds.

MARIA CHAPDELAINE: It's my favourite Canadian film of the year because, well, it's so Canadian in its depiction of pioneering life in Quebec. Life in the remote land is shown through heavy work, storms that make travel difficult and yearning for visitors to feel less unconnected. And, there's a love story at the centre.

ONLY THE ANIMALS: This one's from France and portrays a mystery about a missing woman. Through the different connections to her as told by several people, we're entirely engrossed. It's a very cleverly constructed puzzle.

THE RESCUE: You know the story, 12 boys and their soccer coach rescued from a flooded cave in Thailand. But it's amazing how gripping and tense it becomes anyway in this documentary that uses a few restagings and helpful illustrations to get the drama across.

RETURNING HOME: We now have an annual Day of Reconciliation to address our national residential school shame. This documentary shows how that started, as Orange Shirt Day in Williams Lake. It lets Phyllis Jack-Webstad of the Secwépemc Nation describe her experiences in the school she was taken to when she was six years old. With her culture dying and the salmon declining, it's a very moving story.

GUNDA: For supreme emotional content, check out this film by a veteran Russian director all about a pig. Only her and her litter, no people, just a couple of cows and a one-legged chicken, but there's high drama as she feeds them and later a reason to be upset and confused. This is an extraordinary film.