Climate change and logging contributing to demise of Pacific salmon 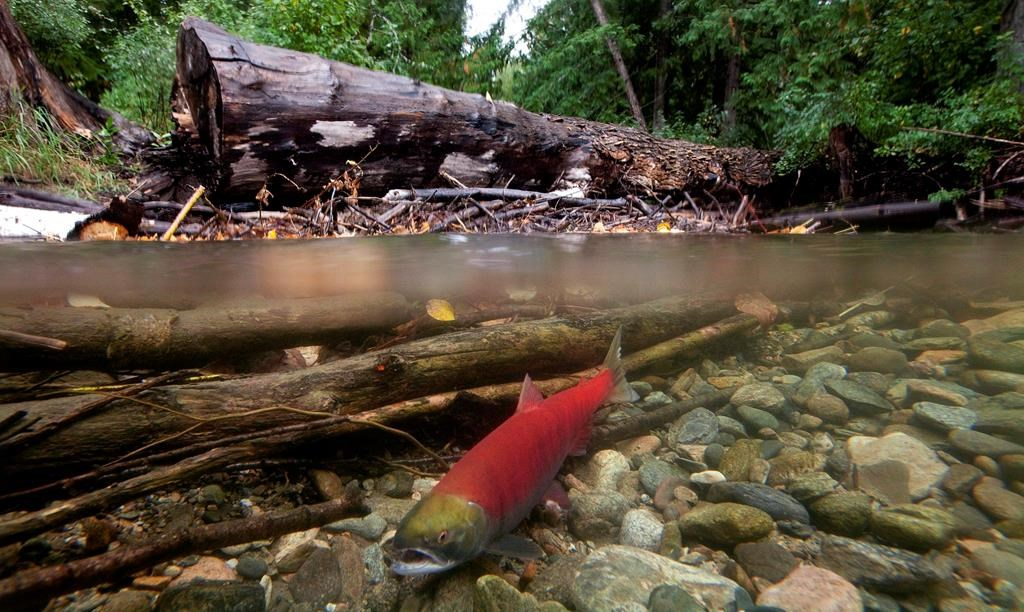 The compounding effects of climate change and logging are contributing to the degradation of Pacific salmon habitat, experts say, adding a reassessment of watershed logging and restoration practices will be key to helping struggling fish populations.

Younes Alila, a professor in the department of forest resources management at the University of British Columbia, said decades of clear-cut logging across B.C. have disrupted the landscape's natural mechanisms for mitigating floods and landslides.

Such events along with heatwaves, wildfires, drought and so-called atmospheric rivers of heavy rain are becoming more frequent and severe, which could have significant consequences for freshwater salmon habitat, Alila said in an interview.

Before logging, the forest canopy helps to collect rainfall and shade snowpack, slowing down the springtime melt, Alila said. The trees also pump moisture out of the ground, increasing the soil's capacity to absorb runoff, he said.

Clearcutting or logging everything in a given cutblock dominated the province's forest industry in the latter half of the 20th century and it's commonly practised in combination with different approaches that leave more trees standing.

Alila said his research over the last 15 years has consistently shown that clear-cut logging increases the size and frequency of floods of all return periods, referring to the estimated years between floods of a similar size or intensity. What would have been 10, 20, 50 or 100-year floods are all recurring more often after logging, he said.

"That's a huge increase in the flood risk on downstream communities," Alila said.

It's also a risk to salmon, which need certain conditions to spawn including gravel to provide protection for delicate eggs and fry. Surging waters can wash the gravel away, scour eggs from the riverbed or suffocate them with sediment, he said.

With some B.C. salmon populations declining to historic lows, the provincial and federal governments have allocated hundreds of millions of dollars for recovery efforts in recent years, including grant programs aimed at habitat restoration.

Similar to floods, clear-cut logging and forest service roads also increase the severity and frequency of landslides, Alila said. Slides carry debris and sediment that can in turn render habitat unsuitable for spawning and the rearing of juvenile fish.

#Logging in #watersheds among stressors for declining #PacificSalmon, experts say.

Slopes become unstable without tree roots as anchors, he said, while the logging roads alone add to the risk as ditches and culverts divert underground runoff to the surface, pushing more water, sediment and debris downstream at a faster pace.

"That density of road network is all over B.C. This watershed is no exception," he said.

It takes decades for forests to recover their full hydrological functionality after being logged and replanted, Alila added.

The effects of logging are compounded by climate change, which is stoking increasingly intense wildfires that leave behind "hydrophobic" or water repellent soil, he said. The charred soil gradually recovers its ability to absorb moisture, but the years after a severe wildfire are especially risky for flooding and landslides, he said.

Forests also provide shade and kelp keep streams cool, while logging in riparian areas can push water temperatures above the 18 to 20 C that salmon can typically withstand, especially when combined with the effects of climate change, said Jonathan Moore, a professor of biological sciences at Simon Fraser University.

"The more logging that happens, the less climate change it can withstand," said Moore, whose work focuses on aquatic ecosystems. "Reciprocally, the more watersheds are protected, the more climate change resilient they are."

Moore points to a 2017 study published in the Journal of Environmental Management that examined how stream temperatures in two river basins in Oregon might respond to the restoration of vegetation and "channel morphology," or the interplay between the force of water and the stability of a river's bed and bank.

The researchers found that a combination of channel narrowing and restoring riparian areas could reduce peak summer water temperatures by 1.8 and 3.5 C in the neighbouring river basins, offsetting the projected impacts of climate change.

Their modelling predicted that cooler temperatures as a result of basin-wide restoration would lead to increases in the abundance of juvenile chinook salmon, even when climate change projections for the 2080s were taken into account.

A recent study by Moore and his colleagues found that a combination of changes in ocean and freshwater habitats had driven steep declines in five salmonid populations over 40 years in a river on the northeastern tip of Vancouver Island.

In fresh water habitat, "the strongest signal by far was forestry," he said.

Alila said he hopes the government will recognize that forestry practices need to change significantly, and not just through "tinkering" with existing legislation, in order to protect both salmon habitat and communities from floods and slides.

"If the government doesn't do it voluntarily, they're going to be forced to when we experience ... more of the same flooding that we experienced this fall," he said.

The B.C. government introduced amendments to existing forestry legislation earlier this fall, promising to reshape forest management with a focus on sustainability.

Past policies "left too much control of the forest operations in the hands of the private sector" and limited the province's ability to fight climate change, protect old-growth forests and share benefits with local and Indigenous communities, she said.

The B.C. Council of Forest Industries supports "modernizing and further strengthening forest policy to ensure we have a strong, sustainable, and competitive forest sector,'' president Susan Yurkovich said in a statement when the amendments were announced.

John Betts, the executive director of the Western Forestry Contractor's Association, said in a statement provided by the province at the time the announcement was made that the changes would allow the government to better manage forest resources for both climate change and the cumulative effects of resource development.

"For our reforestation sector, it means we will be managing stands and implementing forest practices more sensitive to the complexities and dynamics of how our forest and range ecosystems connect over the landscape and time."