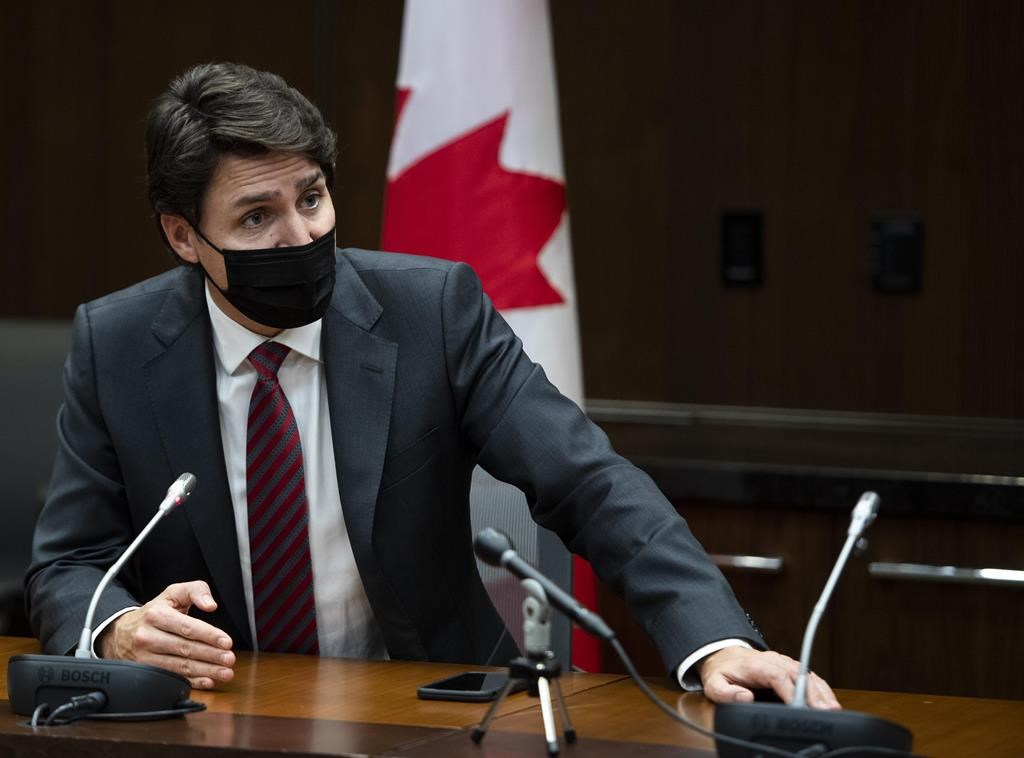 Passengers who filmed themselves partying maskless aboard a chartered Sunwing Airlines flight from Montreal to Mexico last week have become pariahs and now face being stranded after two more airlines announced Wednesday they will not fly them home to Canada.

Following Sunwing's cancellation of the return charter flight from Cancun scheduled for Wednesday, Air Transat and Air Canada both said they will refuse to carry the passengers, who were called "idiots" Wednesday by Prime Minister Justin Trudeau.

Air Transat said on Twitter the "disruptive passengers" from the Sunwing flight had been trying to return home on its flights, but they were denied boarding based on the company's obligation to ensure passenger and crew safety.

Air Canada issued a statement saying that "to the extent that we can identify the passengers who were part of the group, Air Canada is denying boarding to ensure the safety of other passengers and its crew."

Among those looking for a way home is Rebecca St-Pierre, a 19-year-old student from Trois-Rivières, Que., who said she feels abandoned, not knowing how she'll pay for her hotel room as her stay is extended indefinitely. She said she tested positive for COVID-19 Wednesday and is now in isolation in Tulum, south of Cancun. She estimated that about 30 others on the flight have tested positive.

"The organizer just left everybody. I don't know who's still here. All the flights have been cancelled," an emotional St-Pierre told The Canadian Press.

St-Pierre said she won the free trip in a contest on Instagram and had never previously heard of the organizer, who identifies himself on social media as James William Awad. "I was expecting a relaxing week, where I was going to be careful," she said. "But this turns out to be an expensive trip for something that was supposed to be free."

Videos of the Dec. 30 flight shared on social media show passengers not wearing masks as they gather in close proximity, singing and dancing in the aisle and on seats. In one video, a large bottle of vodka appears to be passed among passengers, and later a woman appears to be smoking an electronic cigarette.

St-Pierre acknowledged that the videos give an accurate picture of what went on during the five-hour flight to Cancun.

"There was no social distancing … I think people were doing drugs," St-Pierre said. She said that ahead of the scheduled return trip, some people were putting Vaseline up their noses in an attempt to thwart COVID-19 testing.

The health and safety of on-board personnel as well as passengers during a flight is a top priority. Passengers on Sunwing's flight to Cancun will be held accountable for their actions. Our statement: https://t.co/vtvHiTUnnA

An aviation expert said he hopes the Transport Department investigation will shed light on why the pilot didn't request an emergency landing after the crew lost control of the passengers.

"We live in a world where pseudo-influencers think they are above everything, but a plane 30,000 feet above the ground can be extremely dangerous," said Mehran Ebrahimi, who heads an aerospace industry research unit at the Université du Québec à Montréal.

"Imagine if people decided, for fun, to play with the door? A plane is not a cottage you rent where you can do everything you want."

Awad wrote on Twitter Wednesday that a "simple party" on a plane was behind the controversy. “I will take a moment to sit down and rethink everything,” he said. “Especially how I can do things better next time."

I take this matter very seriously. A simple party on a plane did all this buzz. I will take a moment to sit down and re think everything. Especially how I can do things better next time. Give me a moment to understand the situation better.

Awad, who operates 111 Private Club, organized the trip including a group of social media "influencers" and reality TV stars, such as Karl Sabourin from the popular Quebec show "Occupation Double," and Sandrine Séguin and Anna-Maëlle Laprise, who both appeared on the province's version of "Love Island."

Trudeau called the passengers' conduct irresponsible and a "slap in the face" to everyone who has been following public health restrictions. In French, he referred to the passengers as "idiots" and "barbarians."

This report by The Canadian Press was first published on Jan. 5, 2022.

Canada should accommodate the unvaxxed during Omicron wave: O'Toole

The photograph of Trudeau

The photograph of Trudeau could just as well have been captioned, "Trudeau wearing a mask improperly" he has no excuse for not having a properly fitting mask, and wearing it in such a way that he breathes *through* it, both in-breaths and out-breaths, which requires a snug fit up over the nose and down to the cheeks.
It likely would have helped compliance with masking immensely had politicians always worn properly-fitting masks in public and for photo-ops.

It would also help, even now, if visual media pointed out whenever they transmit/publish images of masks worn on the upper lip, gaping all 'round, etc., actually *noted* that fact in the accompanying text or audio.

I've seen very little sharing of the proportion of individuals hospitalized, who are unvaccinated. That sharing needs to include percentage risks, not just raw numbers, because by and large people jump to the conclusion that, for example, an equal number of vaccinated individuals and unvaccinated individuals in hospital means the vaccines are simply not effective. Of course, if 85% of the population is vaxxed, and 15% not, that represents a 6-fold difference in risk. That's what we get for having watered down math education requirements: people can wind up with PhDs, and still be unable to parse such simple stats.

Public Health at all levels has pursued a CYA approach, and many "Covid science commentators" have ignored or misrepresented the science on Covid as it happened. FI, there was continued insistence that only people with fevers were infected, and that asymptomatic infected individuals could not transmit the illness.

To this day, there appears to be widespread belief that young children develop only mild symptoms and do not endure long-lasting or permanent sequelae.

As for people who might avoid vaccines, generally speaking, or have had severe reactions to vaccines in the past, they need help determining what, exactly, about those vaccines caused the reactions. Most of them will find that at least one of the vaccines available contains none of those ingredients.

Starting with my very first vaccination, at a few months of age, I have had severe reactions to every vaccine I took. I considered taking annual 'flu vaccines, but ingredients were not available to me ... and I stopped even considering once research made it clear that amongst seniors, the vaccines overall (not necessarily in individual cases) did not prevent death and reduced the days of illness by something on the order of half a day; while the period of "'flu-like symptoms" after vaccination was, on average, half a day less than that, it was not a calculation I was willing to take a chance on.

People knowing my history regarding 'flu vaccines were surprised to find I was fully vaxxed, and would be getting a "booster" ASAP. This time is different. Very different. This is a deadly virus, virtually unknown in human populations. I am old enough to have heard first-hand accounts from my grandparents of how the 1918 'flu hit their communities, and how they tried to both keep themselves "safe" and to "be there for" relatives and neighbours. At that time, the far, far majority of the Canadian population lived on farms and the small villages the farm population supported. Church was the organizing factor in the communities, and "love they neighbour" was taken seriously.

In recent years, I've done a considerable amount of genealogical research, and shared findings with others amongst my relatives engaged in the same pursuit. Many people died: children, parents, spouses, siblings.

I have difficulty understanding why those experiences weren't repeatedly referenced in our current plight.

Large numbers of people who resisted vaccines (people I or folks I talk to know) "gave in," albeit angrily, when their jobs were threatened, or when they were actually let go, when they found they couldn't collect EI, either. Even more relented when they were no longer welcome at the gym, at university or in restaurants.

It is entirely possible that the current rules around exemptions do not cover enough people. But it is certain that people who have not been vaccinated are at huge risk of illness, and at present an even greater risk to those who are for whatever reason particularly vulnerable. That alone is, to me, good enough reason to insist that they remain at home: not for their own protection, as vulnerable individuals, including many seniors, have had to do throughout, but for the protection of others.

It would also help if governments reverted to the original purpose of Public Health: which was to protect the health of people, not to "protect the healthcare system." Frankly, that's a huge part of the problem. It makes it so we, as a society, are willing to tolerate huge amounts of suffering and death -- as long as we think the "health system" will be there for us, as individuals. And as long as we persist in the fallacies that have been (and in some cases continue to be) promoted by public officials and media professionals who ought to know better, fallacies that promote an unwarranted attitude of "I'm alright, Jack."

Perhaps it would be helpful if media in communicating this story, and others, would mention that people were asked *not* to travel to foreign destinations over the holidays.