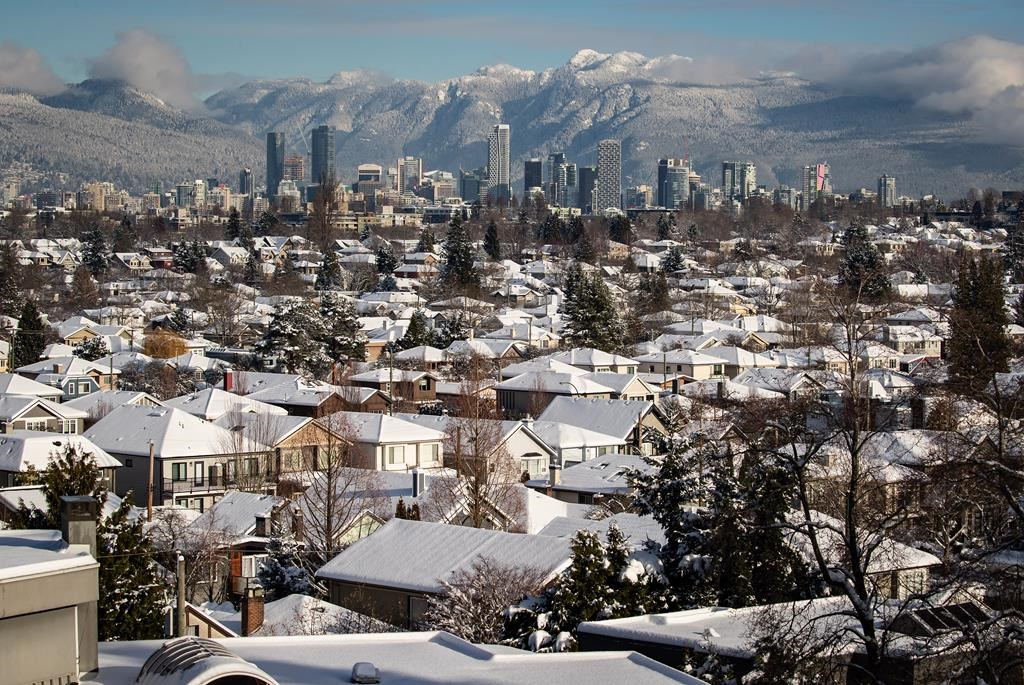 Snow-covered houses and the downtown skyline are seen with the north shore mountains in the distance in Vancouver, on Thursday, December 30, 2021. File photo by The Canadian Press/Darryl Dyck
Previous story

An annual surtax on houses valued over $1 million could help reduce housing inequality and cool housing markets, a report says.

Paul Kershaw, founder of Generation Squeeze and author of the report published Wednesday with input from 80 experts, said it's part of a suite of recommendations aiming to shift the cultural view of housing as an investment to housing as a place to live.

"Just as government has implemented prices on pollution to curb our carbon emissions to address climate change, so we need to have a price on housing inequity to slow down the skyrocketing housing prices that are eroding housing affordability," said Kershaw, associate professor at the University of B.C.'s School of Population and Public Health.

The report proposes a progressive surtax starting at 0.2 per cent and peaking at one per cent on homes valued over $1 million. It would be applied annually and would be due when the property sells.

Unlike a capital-gains tax on all home sales, it would only apply to the top nine per cent of the most expensive homes in Canada, Kershaw said.

The report comes in the same week the BC Assessment authority released annual data showing home values rose across the province, some as much as 50 per cent.

The idea is for homeowners to recognize the system benefits them at the expense of younger Canadians, future generations and newcomers of any age, he said.

Kershaw said property taxes based on mill rates only go so far and other measures like speculation taxes haven't been enough to get housing prices under control.

The report also recommends aligning the mandates of the Canada Infrastructure Bank and Canada Mortgage and Housing Corp. to incentivize lending to scale up co-op and affordable purpose-built rental supply.

Kershaw said housing inequality is a problem across the country but is most acute in Ontario and British Columbia. The administration of the proposed tax would make most sense at senior levels of governments rather than municipalities, he said.

The report was funded with support from the National Housing Strategy's Solutions Labs Program administered by Canada Mortgage and Housing, but the corporation says in a statement it is not responsible for any views or proposals expressed within it.

The federal Department of Housing in partnership with CMHC says in a statement that it is working with provinces, territories and local governments on a Fairness in Real Estate Action Plan but it won't include an equity tax.

"The federal government has clearly stated several times that we will not be introducing a tax on the equity of primary residences in Canada," the department says in a statement.

The plan includes a proportional surtax on "excessive" increases in rent applied by landlords after renovations, an anti-flipping tax and policies to curb excessive profits in investment properties.

"Everyone in Canada deserves a place to call home and we recognize that affordable home ownership has become out of reach for far too many households in Canada," the statement says.

B.C.'s Housing Ministry says the escalating cost of housing is "concerning" and it will review the report.

The B.C. government's housing plan includes cracking down on tax fraud, a vacancy tax and building tens of thousands of new homes, it says.

Ontario's Finance Ministry says in a statement it is tackling affordability through a non-resident speculation tax that has reduced foreign investor activity in the Greater Toronto and Hamilton Area from 4.7 per cent of transactions to under two per cent.

Last month, the government proposed increasing the tax to 20 per cent from 15 per cent and expand it to cover the entire province.

"By expanding the catchment area to include the entire province and raising the tax, we will discourage foreign speculation and make sure our limited housing supply is going to those who need it the most," the ministry said in a statement.

The Real Estate Board of Greater Vancouver said in a news release that changing housing needs during the pandemic spurred an all-time high in Metro Vancouver home sales last year.

Keith Stewart, the board's economist, said Metro Vancouver residents have been assessing their housing needs and options in record numbers in the last few years.

"Home has been a focus for residents throughout the pandemic."

Supply chain issues have also increased the cost of construction and created delays, according to the Independent Contractors and Businesses Association.

President Chris Gardner said in a statement that contractors are experiencing delays and challenges in getting supply not seen in decades.

"In an era where housing and construction costs continue to rise seemingly unchecked, supply chain constraints are another key factor putting pressure on affordability in the B.C. market."

I am confident that I could

I am confident that I could gather together at least 80 "experts" who would demonstrate that this is the dumbest idea in a long time. Why is it in today's world the solution to every possible problem is to tax it?
I suggest an examination be undertaken of the "War Vets Housing" program that was conducted after World War Two. It met the challenge of a housing need and did it by dealing with and supporting those who needed the housing, financing and indeed construction support. The problem today is supply and demand. The demand isn't going away so let us begin to provide a supply with focus on those that need it and leave those that don't need help alone.