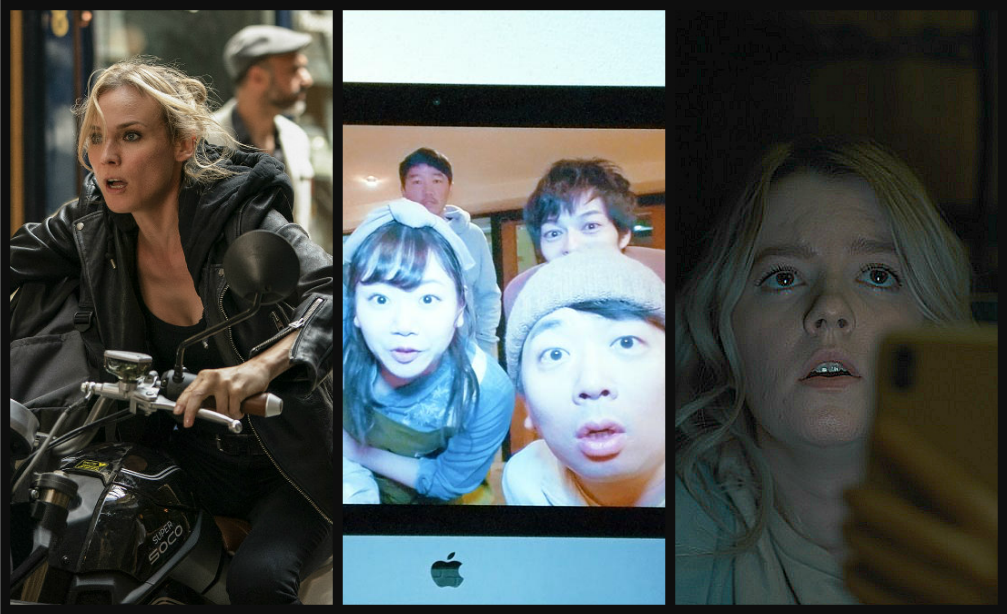 There's only one big film among the new ones this week, but some very good small ones. But then the big ones do tend to stay out of January. And this year, the delays and cancellations keep coming, too. Several festivals have been called off, including one in Palm Springs, and the American Film Institute, BAFTA Los Angeles, the Oscars and the Critics Choice group have all cancelled pre-award events. The Golden Globes go on though, Sunday, but without celebrities or TV coverage.

In Ontario and Quebec, the movie theatres are shut down. So, enjoy these, if you can.

Beyond the Infinite 2 Minutes: 4

THE 355: If you're looking for movies that give women an equal shot, this one might be for you. It's the one good reason to see it. Just check out the cast: Jessica Chastain, who also helped produce it, Diane Kruger, Penelope Cruz, Lupita Nyong'o and, arriving late in the film, Fan Bingbing. They all play intelligence agents from various countries — America's CIA, Germany, Colombia, Britain, China, respectively — who must work together to save the world. Just like James Bond has done so often. Except, they do him one better: they work as a team. Not always, but for sure when it counts.

At issue is a miraculous computer drive that can hack into any device, shut down industries, even blow up an airplane as it flies. Can't let the bad guys get that, but Chastain's character who is supposed to get it from a Colombian mercenary (Edgar Ramirez) fails to and has to round up the team to go after it. The quest takes them to Paris, Berlin, Morocco and eventually to an art auction in Shanghai (that's where Fan Bingbing finally appears). The auction is a cover for a deal on the dark web, a concept that's tossed in to make it seem cutting-edge.

Actually, it's a standard spy film. It moves, there's action (the women can fight and shoot) but the story is quite ordinary. It feels like a Netflix film, assembled for a common denominator audience, directed by a veteran of action and comic book movies, Simon Kinberg, but missing the peaks that would distinguish it. (International Village, Marine Gateway and three suburban theatres.) 3 out of 5

BEYOND THE INFINITE 2 MINUTES: For sheer cleverness, this is the movie of the week. It may not seem that way from a short description. Give it a chance, though. Even though the concept is far-fetched, the cast plays it straight. Most of them are from a Tokyo performance group and there's natural ease in how they act together. You'll go along.

The central idea is a sci-fi concept. Several characters see themselves on TV and can interact with those images.“You've just talked with yourself,” one says. “This is not normal.” What they see on the screen is two minutes in the future. They hear what's coming. Another TV downstairs is linked and allows them to see two minutes in the past. That sparks their imagination. Can they make money by knowing the future? Can they learn the winning lottery numbers? Can they pick the right cryptocurrency? Two minutes of advance knowledge isn't a lot, but they find a way to stretch that to four minutes. And they debate whether they should have higher goals than making money. When they do find some, two guys and then a couple of gangsters burst in. What happens is great fun and also cautionary. “We shouldn't know the future and it's scary,” says one. (Vancity Theatre.) 4 out of 5

SEE FOR ME: Here's a nice surprise: a Canadian film that grabs you and keeps the intensity building like few of our movies do. Pretty rare for a Telefilm Canada-supported effort. The basic idea seems a stretch but director Randall Okita makes it work by amping up the tension bit by bit and making us feel for a young woman in trouble. Sophie (played very well by newcomer Skyler Davenport) is blind because of a skiing accident and takes a one-evening job cat-sitting at a rich woman's house. That's the stretch, but it is explained late in the film.

Sophie hides that she is blind and gets help finding her way around with a phone connection to a woman who can see for her. Whatever she points her phone at. Whatever directions the woman gives her. Once even to get back in when she locks herself out of the house. We're riveted by every step. Sophie, who intends to steal from the house, is in real danger when three guys break in. They're after a safe with a big stash of money. While one drills into it, their leader (Kim Coates) senses there's someone else there and goes looking for Sophie. That's where the tension really builds. The rest isn't as strong because of a late revelation that feels clumsy and a too-easy ending. Until then, it's a smooth thriller. (Available Tuesday VOD and digital.) 3½ out of 5

JUNE AGAIN: Unlike most films about dementia, this one doesn't make us watch the affliction all that much. And very little of the suffering that can come with it. We get much, much more time with those periods of lucidity that interrupt it. A doctor says they're brief. Here they go on and on and make this Australian film a moving examination of family and one woman's reconnection with hers.

June, sympathetically played by Noni Hazlehurst, is stuck in a care home. “Where am I?” she asks. She sleeps uneasily, gets regular memory tests and one day escapes in a cab.

She arrives at her daughter's house, meets her grandchildren, her sons and their mates and finds much wrong. One has divorced. The other never did get into architecture and works in a print shop. The family business (a wallpaper factory) is in decline. “Is there anything that hasn't fallen apart in this family?” she asks. A grandson's class project is a video about her dementia and she's offended. Awkward moments come in bunches as she blurts out things the others don't want to talk about. She also has flashbacks about a man she loved. It's a touching story even though it downplays the rough parts of dementia. (VOD and digital availability.) 4 out of 5

PEACEMAKER: It's not surprising that after Marvel and Star Wars had big hits spinning off series (one, Boba Fett, is unveiling episodes right now), DC would follow right along. Here they've taken a secondary character who they originally bought from another comic book company and last year used in the film The Suicide Squad and gave him his own eight-part series. It starts unfolding Thursday on HBO Max and on CRAVE. What is surprising is the adult content: a strong sex scene, lots of talk about body parts and frequent bursts of both the F-word and the related M-word. This is not one to sit down and watch with your son (depending on their age).

Also not surprising is the humour that pops up frequently. Well, it is written and directed by James Gunn, who gave us lots of that in both the film last year and in two Guardians of the Galaxy movies he made for Marvel. He's got a third one coming, plus a Wile E. Coyote movie. Anarchic and comic suits him and it shows in Peacemaker. Wrestler-turned-actor John Cena stars as the character who so believes in peace that he's willing to kill for it. He's also called “a total douche bag” in one episode. The series has him improve that side of him. And he's forced to work with a group fighting off things called “butterflies.” It's not explained what they are until episode 3, and there are complications revealed after that. I don't know it all, I've only seen seven chapters. The series touches on big themes: government power, racism, misogyny and the reasons behind poor behaviour. And, typical of Gunn's writing: misfits struggling to work together. He's given Peacemaker some tough associates here, played by Jennifer Holland, Chukwudi Iwuji, Danielle Brooks, Freddie Stroma and others. Comic book fun, if you're ready. (CRAVE.) 3 out of 5