Champagne to meet with industry over ongoing supply chain issues 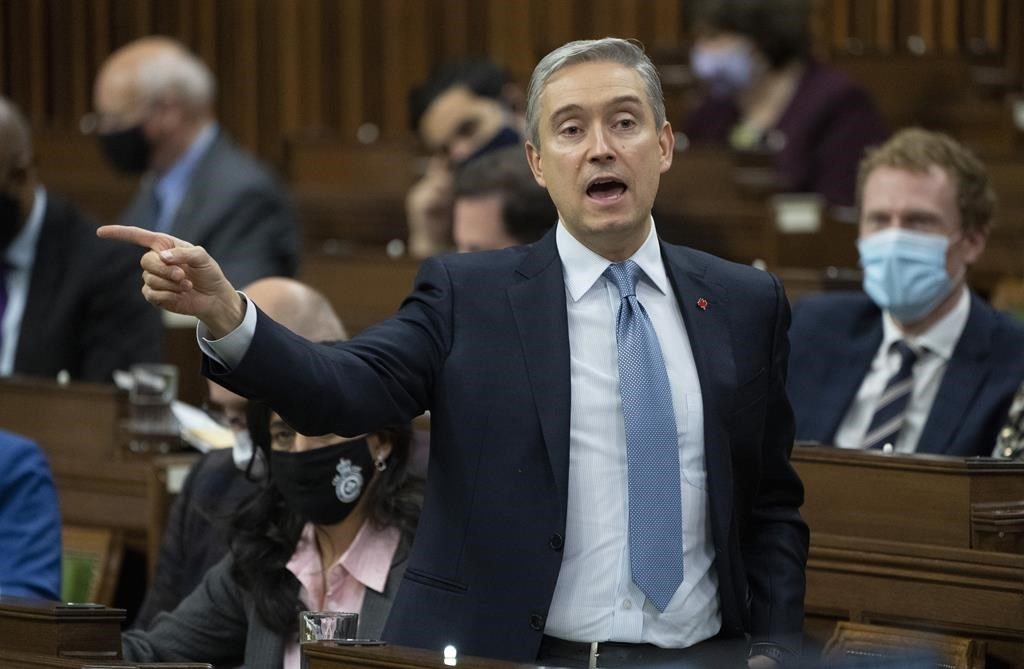 Canada’s industry minister is set to meet with companies desperate for solutions to ease the flow of goods over the border and across the country.

François-Philippe Champagne agreed to the request that a consortium of manufacturers and exporters made just before the holidays.

The coalition of 18 associations notes that many of the causes of the current snarls in supply chains in Canada predate the pandemic, but COVID-19 has harshly exposed those weaknesses.

The group is asking the government to accelerate spending on building up trade and transport infrastructure, and co-ordinate with the U.S and Mexico on building more continental capacity to ease reliance on overseas goods.

Champagne said he's looking ahead to the talks, scheduled for the end of the month, and he points to work underway with ports and transit hubs to prevent bottlenecks choking the flow of goods.

The minister also said he has been having talks with the White House and European Commission about identifying where and how the allies will source critical supplies like vaccines over the next few decades.

The kinks in how the country organized its supply chains became apparent in the early days of the pandemic as governments, companies and households had difficulties, for instance, sourcing personal protective equipment.

"What I'm trying to see with colleagues is can we map the type of critical supply we'll need, and work with trusted partners around the world to build very resilient supply chains," Champagne said during a teleconference with reporters Wednesday after announcing over $550 million in funding for Canadian researchers.

"I see them going from global to regional, where more emphasis is put on resiliency than efficiency."

Top federal officials have been looking at building sectoral resiliency since the fall of 2020, according to documents obtained by The Canadian Press under the Access to Information Act.

A presentation to a September 2020 meeting of deputy ministers noted vulnerabilities like the just-in-time delivery model and "low storage capacity" in sectors like manufacturing and retail.

The approach the deputy ministers considered was to reduce trade risks by diversifying the sources of goods, "including regional alternatives," build domestic production capacity and storage particularly for "critical goods" like protective equipment, vaccines and food, and "accelerate digitalization and industry adoption of supply chain resiliency technologies."

Among the research funding Champagne announced Wednesday is a $24-million grant to Queen's University researchers looking at a new way to coat metal surfaces and protect them from rusting, thereby extending their life and potentially saving billions on infrastructure repairs.

Head researcher Cathleen Crudden noted how supply chain issues can affect the delivery of materials she and other researchers require for their work.

She said her project could also help Canada build a more resilient supply chain for semiconductor chips by getting the country more involved in manufacturing them.

"It is important not only to be a recipient of technology, but to be a contributor," Crudden said. "This work will actually contribute to bringing Canada really right into state-of-the-art methods for manufacturing semiconductors."

There were hopes that trade problems that have grown since the fall would crest by the time the calendar turned to 2022 before resolving by the spring, but now those hopes are facing a headwind from Omicron.

The fast-spreading variant has sent absentee rates jumping for companies who have started to slow production of goods already in high demand, said Dennis Darby, CEO of Canadian Manufacturers and Exporters, who also chairs the coalition of associations scheduled to meet with Champagne.

"Stuff is layering on top of each other," Darby said.

"We know there are going to be supply chain issues, but we figured they should have started to ease. And then lo and behold, Omicron hits."

On the meeting with Champagne, Darby said his group wants to find supply-chain solutions and ensure the government doesn't miss an opportunity to make fixes for the long-term.

This report by The Canadian Press was first published Jan. 12, 2022.