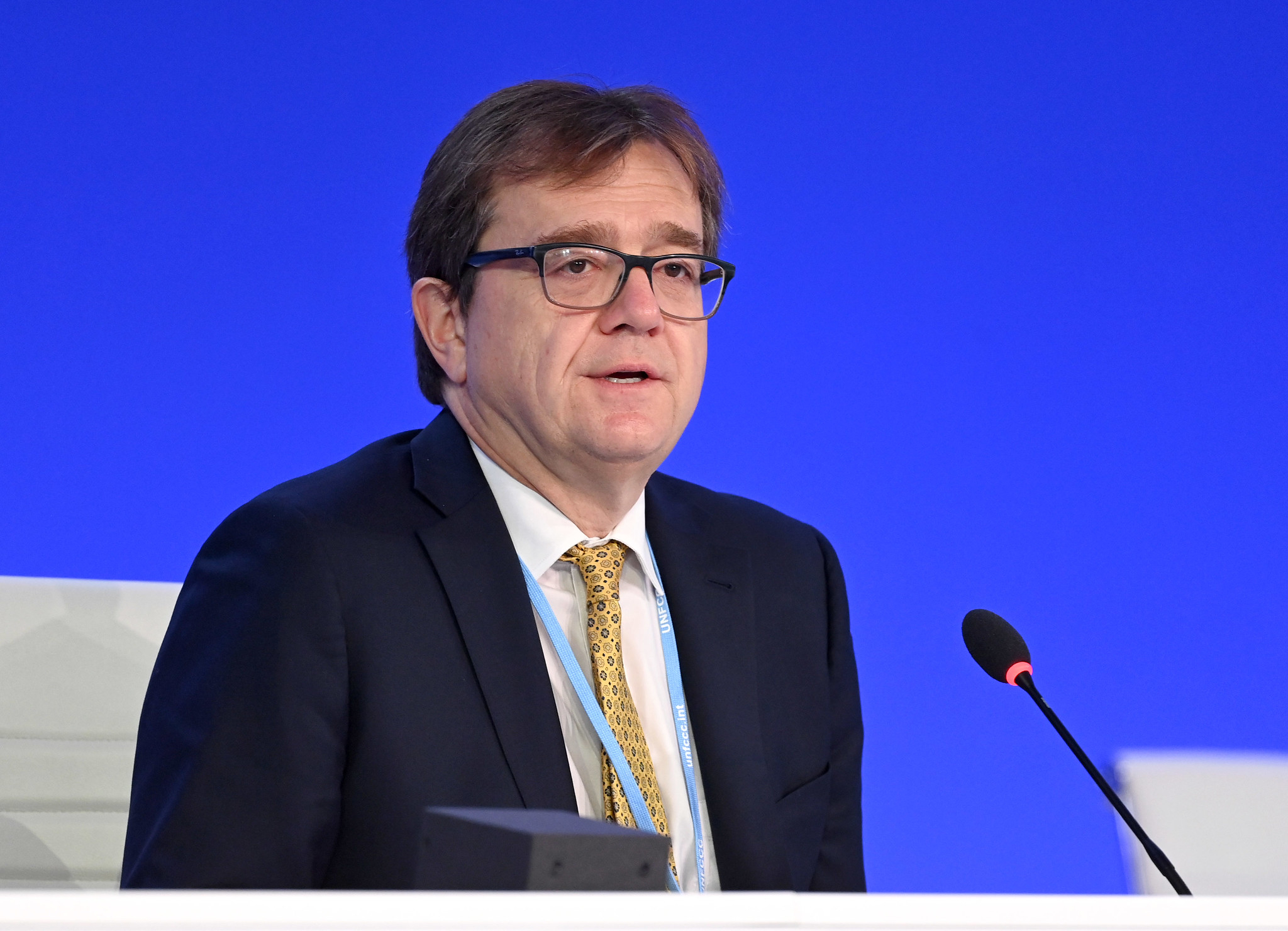 Natural Resources Minister Jonathan Wilkinson says a new report from the International Energy Agency vindicates the government’s climate progress, but he adds more must be done to decarbonize.

The 261-page report released Thursday is a comprehensive summary of Canada’s energy policies since the IEA’s last in-depth review from 2015. It spells out which sources of energy Canada uses and produces and makes a series of recommendations relating to oil and gas production, energy efficiency, nuclear power, and more.

“This report, in my mind, is a validation of the work that the federal government has been doing over the past six years, and it's also a call for continued and sustained action to make sure Canada, and the world, move aggressively forward to create an environmentally sustainable and economically prosperous future,” Wilkinson said during a press conference.

Specifically, the report’s chief recommendations urge Canada to model pathways to net-zero by 2050 for the energy system while working with provinces and territories, strengthen interprovincial power grids, develop an energy efficiency strategy and increase federal funding for clean technology research and development.

Last month, the Canada Energy Regulator confirmed in a letter to Wilkinson that it would model energy forecasts consistent with net-zero by 2050 going forward, as requested by the minister.

The report also acknowledges the global energy transition off fossil fuels is well underway, noting emissions from the oil and gas sector — responsible for a quarter of Canada’s total emissions — need to be addressed. Emissions intensity (relating to the extraction and production of oil gas) have fallen 32 per cent since 1990, the study notes. But while another 17 to 27 per cent reduction is expected by 2030, the report says more progress is needed because more efficient production is being offset by higher production.

Wilkinson also highlighted the federal promise to cap oil and gas sector emissions, with binding targets to ratchet them down over time. But that wasn’t enough, he said, and the country will also take steps to reduce demand for fossil fuels.

“Oil is primarily used for transportation purposes, and we have said there will be no internal combustion engines sold in this country after 2035 for light-duty vehicles,” he said. “That is something that will drive down demand.”

Environmentalists were quick to warn that waiting for demand to decline allows production of fossil fuels to rise in the meantime. With only eight years left to meet the federal government’s Paris Agreement target, more aggressive policies should be pushed now, they say.

“In a world that is already battered by the effects of a changing climate, it is unconscionable to keep growing fossil fuel production. Canada must cap our oil and gas production and develop a plan to wind down extraction as global demand declines,” said Canadian oil and gas programs director for Stand.earth Sven Biggs in a statement.

“The future of energy is clean and sustainable. We must stop trying to put off that transition," says @svenbiggs with @standearth. #cdnpoli

“The future of energy is clean and sustainable. We must stop trying to put off that transition.”

Similarly, Clean Energy Canada executive director Merran Smith said in a statement that Canada must now prepare for a fast-approaching world where oil is no longer the country’s largest export.

“Fortunately, a number of emerging and evolving industries are creating opportunities across numerous Canadian sectors and regions, from clean hydrogen, to electric vehicle manufacturing, to the battery supply chain,” she said. “Getting a foothold in these growing markets today will help secure Canada’s long-term economic prosperity.”

Some critics also pointed out what Julia Levin, climate and energy senior program manager with Environmental Defence, called a “misalignment” between what the IEA has previously reported and what it is now telling Canada. Levin referenced the IEA’s net-zero report published last year, a landmark study showing how the world could transition its energy systems to a climate-safe future, and noted that the recommendations the IEA is now giving Canada don’t take the net-zero pathways into account.

“Last year, the IEA put out a really robust roadmap to limiting global warming to 1.5 C and I expected to see that reflected in the recommendations being made for Canada, and it was absent,” she said. “It was missing the 1.5 C alignment completely.”

“Nevertheless, behind the report's polite technocratic language is a clear warning that the industry's ambition of increasing oilsands production is at odds with a climate-safe future,” he told Canada’s National Observer.

“Anyone planning to increase production and exports of fossil fuels is betting that we will fail to address the climate crisis, and is thereby advocating for all of the suffering that would entail.”

Adaptation and disaster response are keys to building resilience

All such claims need to taken with a grain of salt.
Make that a salt shaker.
In recent years, nominal oilsands emissions intensity has decreased in part because a smaller share of bitumen is being upgraded at home in favor of more raw dilbit exports. This simply transfers emissions to U.S. refineries. An accounting maneuver. Expect this trend to continue as long as Canadian crude exports rise.

As one study after another shows, Canada's oil & gas industry grossly under-reports its emissions (of all types). The industry's intensity and total emissions stats are fictional.

And this: "more efficient

And this: "more efficient production is being offset by higher production." I remember trying very hard to explain that to Stephen Harper when he was our not-so-prime minister. Meanwhile, although the IEA does some good work, it's still the "International Energy Agency" so we can't expect them to pull the plug on fossil fuels.

We have to understand that "net-zero by any year" is a complete boondoggle. We need an urgent transition to zero-carbon, non-combustion, renewable energy. Otherwise, we're emptying the bathtub with a teaspoon while the water is still coming out of the faucet full blast.

Climate Action Tracker's 2021 report rates Canada's efforts overall as "highly insufficient". Same rating since 2011 -- in every year but one in the last decade.
www.climateactiontracker.org/countries/canada/

For years, the OECD, the UN, and the federal Environment Commissioner have warned that Canada is NOT on track to meet its targets. The main stumbling block? Increasing oilsands emissions.

A plan to fail.

Wilkinson in his contorted

Wilkinson in his contorted rational reaffirmed Canada's commitment to phasing out fossil fuels and achieving net zero carbon emissions by 2050, but said achieving that target will REQUIRE MONEY GENERATED BY FOSSIL FUELS. Wow we can burn our way out of this problem. Start pumping bitumen fast to curtail polution. Gee by 2050. I can't wait till then when everything will be beautiful again, with thick forests and clean air and wildlife frolicking in pristine fields, sea life exploding. So delusional arrogant and ignorant it's hard to believe these clowns are in office. Lip service liberals!

Wilkinson in his contorted

Wilkinson in his contorted rational reaffirmed Canada's commitment to phasing out fossil fuels and achieving net zero carbon emissions by 2050, but said achieving that target will REQUIRE MONEY GENERATED BY FOSSIL FUELS. Wow we can burn our way out of this problem. Start pumping bitumen fast to curtail polution. Gee by 2050. I can't wait till then when everything will be beautiful again, with thick forests and clean air and wildlife frolicking in pristine fields, sea life exploding. So delusional arrogant and ignorant it's hard to believe these clowns are in office. Lip service liberals!

This is what the report

This is what the report actually said:
-- " Canada remains the only G7 country whose greenhouse gas emissions have increased substantially since the adoption of the Paris Agreement."
That does emphatically not amount to "exoneration." Which in itself is an interesting term to use.
-- "Canada is also the top per capita public financer of fossil fuels in the world and projects increased oil production through 2050."

And it didn't begin to address homelessness, treatment of homeless people, abuse in shelters, or hugely inadequate living allowances for people with disabilities and many old people -- not to mention their being largely left behind in the "Covid Scenario."