Movies: Ghostface is back; Belle finds herself on the internet, and some Cold War history 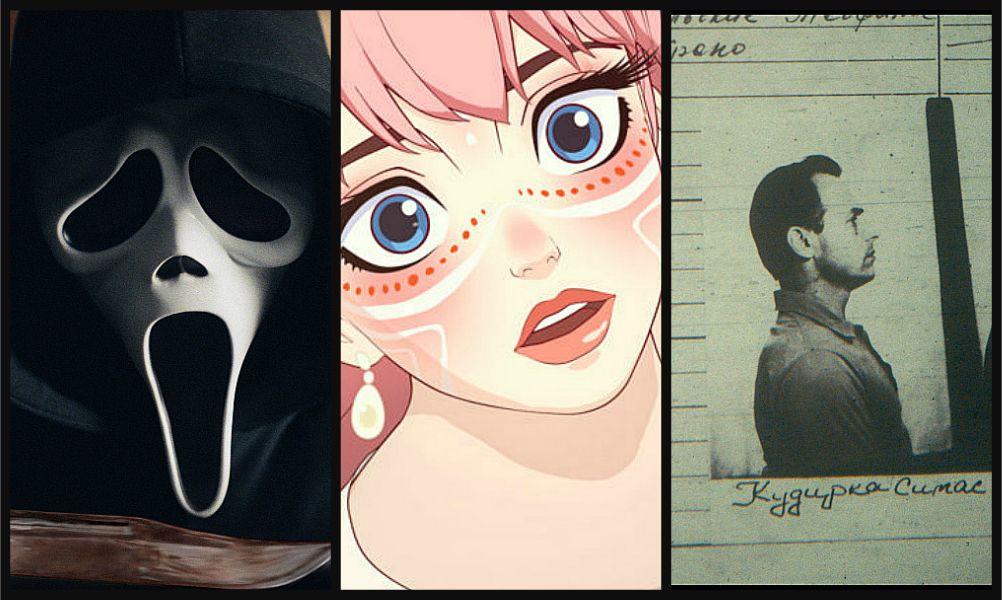 First, a few items to note. The long-lost Dennis Hopper film Out of the Blue, which I wrote about a couple of weeks ago, is now at the Vancity Theatre. He directed it in Vancouver and many say it's his masterpiece.

The Cinematheque has got three more screenings of C.R.A.Z.Y., the award-winning coming of age film that brought Quebec's Jean-Marc Vallée to our attention. And Hollywood's. He made Wild and Dallas Buyers Club down there. Sadly, he died last month. The film was long out of circulation because the music rights had expired.

Iran's downing of that Ukrainian airliner two years ago has been in the news because of an anniversary and some court rulings. Saturday afternoon, Rio Theatre is showing a film about it called Broken By the Wind. Joseph Akrami, an opponent of the regime, made it to focus on the victims and their families. He and a grieving father will be talking afterwards. Admission is free, by donation only, but you should RSVP.

And elsewhere, we have these ...

SCREAM: Twenty-five years after the first one and 11 years since the last, here's another killing spree by Ghostface. That's number five in all, not with Wes Craven directing this time but very much in his style by a couple of acolytes, Matt Bettinelli-Olpin and Tyler Gillett. They've upped the meta feel with lots of references to what came before, to other horror movies and the rules they follow and with characters who know the genre and analyze it. One calls this a “requel,” related to but not exactly a “sequel.” It is immensely clever, and entertaining until it gets out of control in a flurry of violence at the end. That's entertaining too, of course, to the fans the film plays to.

It's cast with new characters, a pair of estranged sisters, boyfriends and others, plus so-called “legacy characters” who've been around through all the films. They're played by Neve Campbell, Courtney Cox and David Arquette. They're drawn back in to help solve this latest terror, which we are told early on is brought on by somebody with close connections to them. Like in a murder mystery, the killer is among them. Just eliminate suspects and see who's left. Actually, it's not that easy. It takes the revelation of a major new piece of information. We're hooked by the search, though, and the smart, often-funny, self-aware comments that keep popping up. (Scotiabank, Marine Gateway, Dunbar and many suburban theatres.) 2½ out of 5

BELLE: At times, this wonderful animated film from Japan seems like a modern update of Beauty and the Beast. Her name alone hints at that. But this is much more. It's a dazzling tour of the meta-universe out there on the internet and one young woman's reaction to it. Suzu becomes Belle when she enters it through a fictional portal called U. Out here, she's too shy to sing in public. In there, she's a big star who sings lofty ballads to stadium-sized audiences while lights flash and the fans cheer wildly.

It's wish fulfilment and an antidote to the trauma she suffers from losing her mother years before. Mom had tried to save a drowning child. Suzu will be faced with a rescue mission of her own. The character you become in the meta-verse reflects your mood and your self image. So who is this giant beast that keeps barging in? He's being hunted by an offensive security agent who screams, “Unveil the beast.” Belle feels there's a story something like hers there and takes his side. It's a rescue and an optimistic vision of the internet (“Live as another you. Change the world," it says) and with crowds, a castle, stars and her song performed on the back of a jumping whale, a spectacularly-visualized film by Japan's latest animation star, Mamoru Hosoda. Belle got a 14-minute standing ovation at Cannes. (International Village and suburban theatres.) 4 out of 5

THE JUMP: To me, this is the best new film this week but it'll take some work to find it. Not in Victoria, where it's playing at the Vic, but elsewhere. Three virtual cinemas in Ontario and Quebec have it. Here's the link to The Hyland in London, Ont. Why go to the trouble? Because it's a great history lesson, a puff of nostalgia and a darn good yarn. It's got several twists, one after the other, and first-hand recollections by several of the people involved.

It goes back to 1970, the height of the Cold War, and starts, as often happens, with Walter Cronkite. Later, there's Tom Brokaw, Peter Jennings and others and a big surprise, a brief visit to Canada. A fishing disagreement on the American East Coast had brought Russians and Americans to meet on a U.S. Coast Guard ship. A Lithuanian sailor jumped from his boat to the other and asked for asylum. He recalls he was fed up with Soviet control and was attracted by American consumer goods. The American captain frantically tried to get word from Washington what to do and eventually got it: send him back. Russian guards roughed him up right on the American ship and when that hit the news, it was a scandal. Nixon had to answer. Gerald Ford had to deal with it and in a new interview, Henry Kissinger praised him for it. The sailor, who we see revisiting the very spot where he was beaten, was played by Alan Arkin in a TV movie and back home was sentenced to 10 years in Siberia. But more twists came, one so huge you'd dismiss it in a piece of fiction. They changed everything, cast some doubts on the sailor and illuminated both the reality and the absurdity of the Cold War. Extraordinary. (The Vic and virtual.) 4½ out of 5

PRESIDENT: Zimbabwe politics provides multiple plot lines for this engaging documentary. Robert Mugabe was ousted by the military. They promised free elections but didn't deliver under President Emmerson Mnangagwa. So hopes were high when a valid challenger roused the crowds four years ago. Nelson Chamisa looks a bit like Eddie Murphy but has been compared to Nelson Mandela. Oddly, Mugabe endorsed him, although that seems to have been out of spite for the men who threw him out.

The film is a zippy study of Chamisa's campaign. There's high drama, like when we hear him say into a telephone: “Oh, my God. Don't tell me that.” There's moxie when his people confront the electoral commision. There's corruption, as when his people find polling stations that report more votes for his opponent than the total votes that were cast. There's outrage when the army fires on crowds with water cannons, and even live rounds. “Looks like a second coup,” we hear. And there's high tension when the electoral commission takes a long delay in announcing the results of the election. Director Camilla Nielsson takes us right into one side in this climactic contest. (Vancity Theatre.) 3½ out of 5

PRISM: This documentary has an intriguing thesis and method. It argues that the very technology used to make movies discriminates against Black people. Cameras and film were invented by whites, calibrated to white skin and therefore, people of colour do not look right on film. When they're in the same scene as white people, they come off looking dark. There are examples here where you can hardly make out the Black people. And also examples of Black people photographed correctly because they're alone.

Photos, film clips and a Skype discussion open the subject and then take it further: equating it with colonization. An van Dienderen is an artistic researcher from Belgium, Eléonore Yameogo and Rosine Mbakam are filmmakers from Africa and they dispute the argument that technology is neutral. Mbakam says, "I didn't know who I was. I swallowed the poison that I am nothing." One was called a Hottentot Venus. The North, where cameras came from, they say, is different from the South. It represents "power" and "domination." They speak with passion, but is it inherent racism they're talking about? The solutions they offer seem pretty easy to institute. (Cinematheque.) 3½ out of 5

BORREGO: This film doesn't accomplish what it seems to want to do, but pulls you over and entertains anyway. It looks to be a warning about the evils of the drug trade, a “crisis” according to script at the start and at the end. But for the 100 minutes or so between, it doesn't mention it. Instead, we get a survival thriller, terse and streamlined and very involving. It's set in the desert near San Diego, Calif., sometimes in the small town of Borrego Springs.

A research botanist (Lucy Hale) sees a small plane crash, finds the injured pilot (Leynar Gomez) and soon figures out he was flying drugs from Mexico. He takes her prisoner; she buys her freedom by offering to show him the way through the desert and they have to learn to trust each other. A local sheriff (Nicholas Gonzalez) is looking for them. His daughter (Olivia Trujillo) wants to help him because she had earlier met the botanist, and the man who is expecting to receive the drugs is getting raging angry. They're all going to interact, up close or long distance, and the tension builds nicely as one or the other of them follow tire tracks and footprints in the sand. There's also a shootout in a rocky canyon and a fire. Writer-director Jesse Harris didn't give us much in the way of character-building, but there's compensation in the adventure. (On digital and on demand at various sites.) 3 out of 5

ITALIAN STUDIES: I could never get a firm handle on this film. I was as much in a daze as the central character: a published writer played by Vanessa Kirby. She wanders aimlessly around New York City, getting into conversations here and there, mostly with teenagers, about this and that, their perceptions of the world and how people perceive them. They're chatty and reflective but nothing gets established. Is she listening to them as research for a novel she wants to write to follow the short story collection named in the title? Not clear.

“Erin spent most of her life lost in herself,” she has written and it perfectly describes this film. She forgets her dog tied up outside a hardware store. She's asked, “Are you Jewish?” and answers, “I don't know.” One character hides pot in the card-pocket of library books and smokes it with her. She goes to a loud concert and is attracted to a singer called Lucinda but then can't find her. And nobody knows her. When she walks alone, she says in voice-over: “I don't remember who I am. Where I'm supposed to go.” Has she lost her memory? Probably. How? Not sure. Writer-director Adam Leon gives us ambience, not answers. (VOD at Rogers, Shaw, Telus, Cineplex and other sites.) 2 out of 5

These two provinces got a head start on climate action