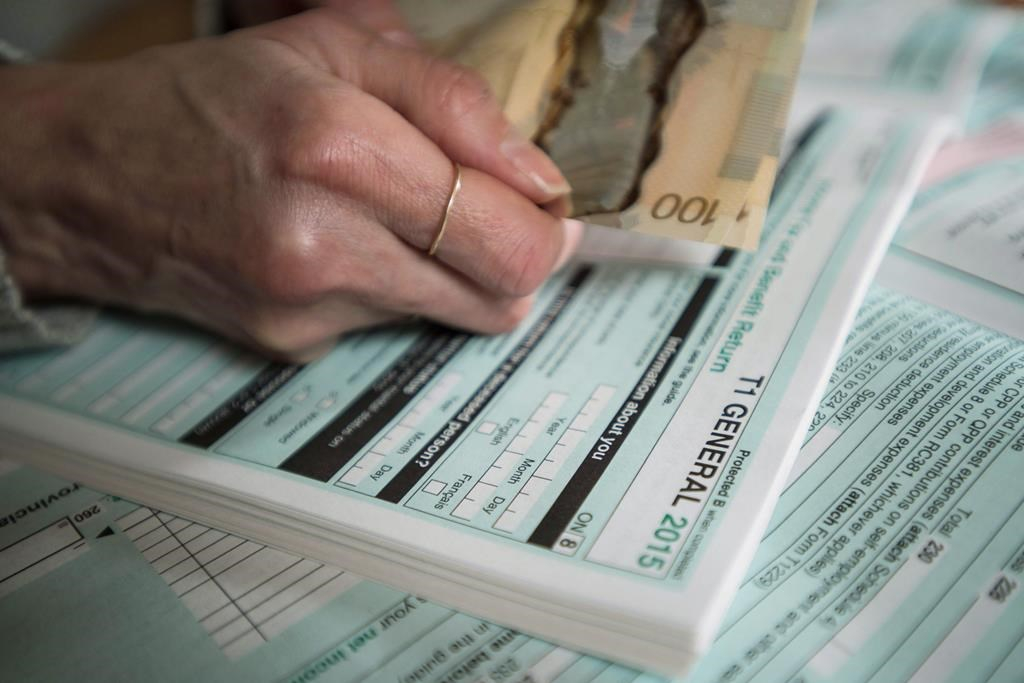 Tax forms and Canadian currency are shown together in this photo illustration taken in Toronto on Sunday, April 3, 2016. Photo by: The Canadian Press/Graham Roy
Previous story
Next story

Results published this week in the journal Nature Climate Change say that not only did rebates fail to make much difference to public opinion, Canadians don't understand them very well.

And those convinced they were paying more in carbon taxes than they received remained just as convinced even when they were shown the facts.

"Partisanship had a big impact — not just on whether people were supportive of the idea of carbon pricing, but on their perception of the facts," said co-author Kathryn Harrison of the University of British Columbia.

Harrison said she and her colleagues wanted to study whether carbon rebates — returning money to taxpayers to offset or even exceed the amount they'd paid in carbon taxes — would make the policy more palatable.

"Canada was one of the first two countries to do that," Harrison said. "There was an opportunity to systematically check what was the impact of the policy."

The team surveyed Canadians between early 2019 and March 2020. They looked at Saskatchewan and Ontario, whose residents get the federal rebate; Quebec, which uses a cap-and-trade system to reduce carbon; British Columbia, which has a provincial carbon tax without rebates; and Alberta, which ended up on the federal program halfway through the study when it cancelled its provincial levy.

Respondents were queried after the rebate plan was announced, after it was implemented, after the first rebates were issued, after the 2019 federal election and a year after the initial announcement. The sample size was 3,313 at the start and 899 by the end of the fifth survey.

"There was no magic," said Harrison.

The survey found, at most, minor changes in support for carbon pricing over time in all five provinces. British Columbia, which doesn't offer rebates, showed the biggest increase at about 10 percentage points. No province showed a decrease.

Your political affiliation has everything to do with whether or not you approve of carbon taxes, or not. #cdnpoli #carbontax

There were wide gaps in support between self-identified Liberal and Conservative respondents.

But the researchers found nearly half the Ontario respondents and about a quarter of those in Saskatchewan didn't even know they got a rebate. Those who did consistently underestimated the amount by an average of 40 per cent in Ontario and 32 per cent in Saskatchewan.

When researchers showed the respondents the true value of their rebate, a simple calculation that requires no tax data, the results again split over political affiliation.

"They must have increased their estimate of how much they were paying up front," she said. "(They) seem to have adjusted their beliefs in order to support their position of opposition to the federal carbon tax."

When the researchers conducted similar surveys in Switzerland, the other country to have implemented a rebate system, Harrison said the results were similar.

The results are discouraging for those who think of the public as composed of rational actors coolly evaluating information and acting on their best interests, Harrison said.

"Giving people back money doesn't automatically shift the politics of it.

"Canadians are getting their signals on this type of policy from people they trust, whether it's interest groups or politicians. In many cases, they are basing those positions on inaccurate information."

This report by The Canadian Press was first published Jan. 25, 2022.

Argh. Why do people have to

Argh. Why do people have to be people?