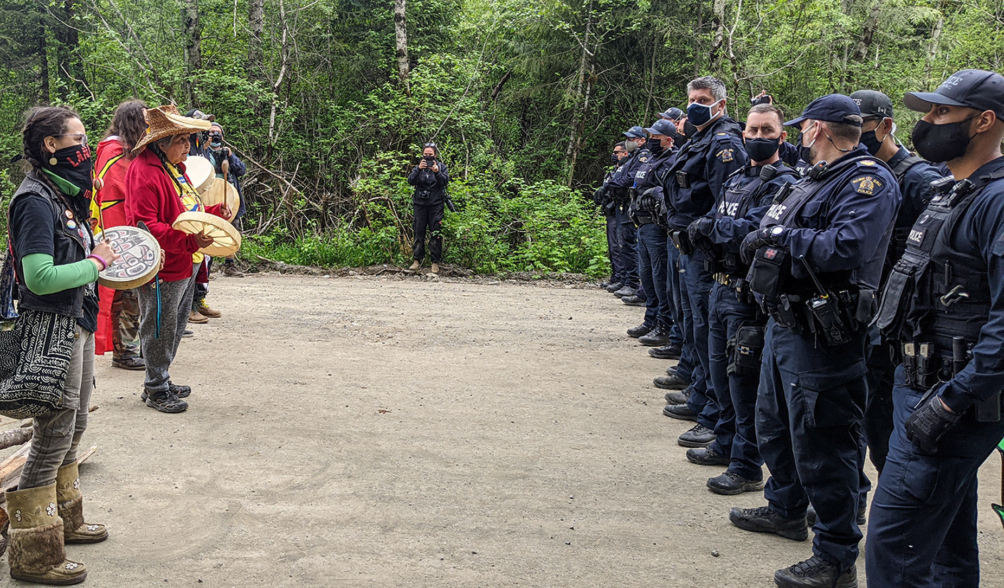 Fairy Creek activists have been dealt a blow after a court decision Wednesday upheld a logging company’s bid for an ongoing order to halt contentious old-growth blockades on southern Vancouver Island.

The B.C. Court of Appeal granted Teal-Jones’ application to extend a court injunction against the longstanding blockades by the Rainforest Flying Squad in Tree Farm Licence (TFL) 46 near Port Renfrew until Sept. 26.

The logging company sought the appeal after a B.C. Supreme Court judge denied an application to extend the original injunction in September because he found aspects of RCMP enforcement at the blockade endangered the court’s reputation.

That ruling didn’t sufficiently weigh the public’s interest in having the court uphold the rule of law, which must be the dominant consideration in all cases involving significant and persistent acts of civil disobedience, the panel of three appeal judges said.

“In the circumstances of this case, the injunction is all that stands between Teal Cedar and a highly organized group of individuals who are intent on breaking the law to get their way.”

Protests are part of a healthy democracy, the judges said, but the interference by protesters to frustrate Teal-Jones’ legal logging operations is unlawful.

Digging trenches in roads, building barricades, sitting in trees, locking themselves into various dangerous contraptions or occupying structures like tripods to prevent logging and to make arrests more difficult are the types of actions deemed illegal.

“There is a clear demarcation between the type of conduct displayed in this case and the actions of lawful protesters who use peaceful means to persuade the government to change policy,” they said.

More than 1,100 people have been arrested in connection with the Fairy Creek blockades that started in August 2020 and have become the flashpoint for public outrage over the B.C. government’s handling of at-risk, old-growth forests.

The court case concerns an injunction, not the wisdom of provincial forest policy, which falls under the constitutional powers of the B.C. government elected by voters, the judges said.

The B.C. Court of Appeal has extended logging company Teal-Jones' injunction against the Fairy Creek old-growth blockades until Sept 26. #Logging

“It is decidedly not about the court’s views on whether and where old-growth logging should occur in this province, even in the context of climate change.”

The appeal court decision wasn’t wholly unexpected, said Kathleen Code, a spokesperson for the RFS and a defendant in the case.

“It wasn’t a surprise, unfortunately, but it is terribly disappointing,” Code said.

The appeal judges didn’t scrutinize unlawful police behaviour flagged for concern by Supreme Court Justice Douglas Thompson when he denied the injunction, but they certainly did so when looking at protesters’ actions, she said.

The RCMP’s use of broad exclusion zones, searches and checkpoints to limit access by the public and journalists to the area had already been deemed in August as violations of civil liberties. And RSF activists allege police used excessive force and questionable tactics when enforcing the injunction.

“Quite frankly, I'm worried the RCMP will take this (decision) as a free licence,” Code said.

“And that it condones their behaviour and will encourage them to go out and practise unlawful behaviour … and militarized action against peaceful citizens.”

The appeal court judges said the legitimate concerns raised by Thompson about the RCMP’s conduct can be addressed in other ways.

People arrested for violating the injunction can argue that officers violated their rights at trial, the judges said. Or complaints against the RCMP can be filed with the Independent Civilian Review and Complaints Commission.

"They tell us we can make complaints against the RCMP, but the process is flawed and bureaucratic,” Code said, adding the decision illustrates the courts protect corporate rights above those of the public.

“Basically, there is no law in place that will sanction their behaviour, or make them accountable,” she said.

RSF will take time to evaluate its next steps following the decision, Code said.

But meanwhile, B.C.’s NDP government still allows the destruction of irreplaceable old-growth despite its promises of deferrals and consultations with First Nations, she added.

“Those forests are still being cut,” Code said. “We want society to face issues of climate change, the loss of biodiversity, and the social and economic injustices that are before us.”

beyond disgusting but then,

beyond disgusting but then, who are these judges appointed by? and dont you love the cherry-picked application of "rule of law" in BC ( Delgamuukw decision not applied), in Alberta ( truckers blocking infrastructure not arrested) , in Ontario (pick one!) , In Nova Scotia ( native fishermen assaulted but offenders not charged or arrested or mistreated) but victims charged)

government laws and their application are the difference between justice and oppression all through our history of labour and citizens movements. Organized resistance is the only way not to be picked off one by one.

.....meanwhile, B.C.’s NDP government still allows the destruction of irreplaceable old-growth despite its promises ............... well voting "B.C. Liberal" won't improve anything with regard to the protection of old-growth forests. Vote Green?