The Ottawa protests may have been non-violent, but there was violent imagery and threats 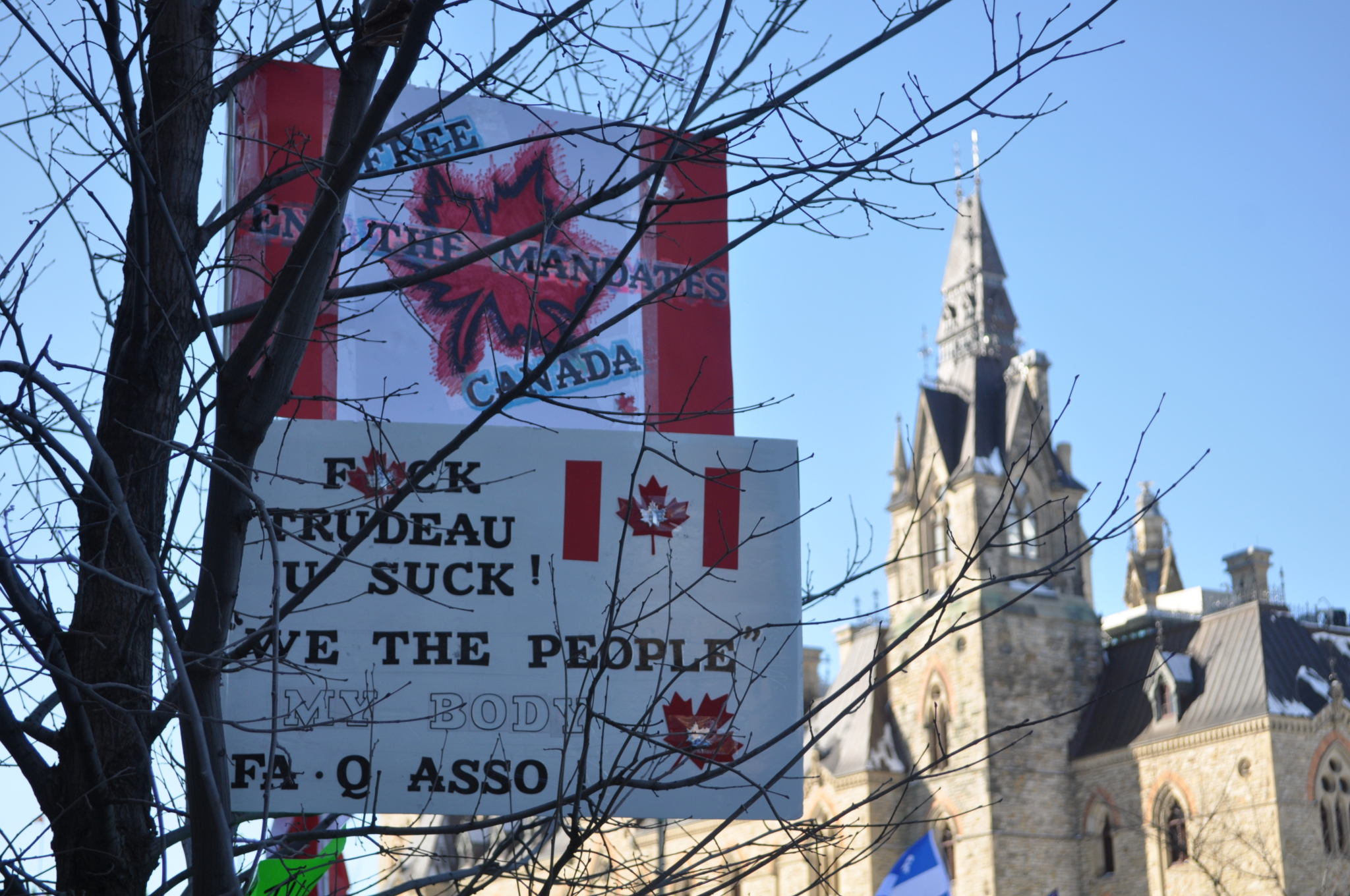 Police haven't reported any physical violence at the ongoing Ottawa rally against vaccine mandates and other government-imposed COVID-19 restrictions, but critics warn that conflating the absence of bloodshed with "peaceful" protest downplays the dangers of the weekend demonstrations.

For two days, the downtown core of the nation's capital has been a no-go zone as trucks and crowds have snarled traffic, with some members defacing monuments and wielding signs with violent and hateful imagery. Police are also investigating what they describe as threatening behaviour toward officers, city workers and other individuals, as well as damage to a city vehicle.

But as of Sunday afternoon, there were no arrests related to incidents of physical violence during the demonstrations, a police spokeswoman said, though a statement issued that evening said "confrontations and the need for de-escalation has regularly been required."

This has prompted many media reports to describe the protests as "peaceful." Activists and academics on social media have taken issue with this characterization, saying it undermines the fear, damage and disruption the protests have wrought.

Catherine McKenney, the councillor for Ottawa's downtown, said the protests have been very disruptive for local residents, adding many have also found them disturbing.

"They’re also seeing the images that we're all seeing, of very right-wing extremist messages: the flags that display the swastika, confederate flags, images of a prime minister being lynched," McKenney said. "I’m not sure that I would continue to call this peaceful."

McKenney, who is non-binary, said they aren't sure they would be safe venturing downtown.

"There's no doubt that there is a large element in this convoy, that is part of a movement, that is extreme and that is xenophobic. We knew that coming into the weekend, but it's really very difficult to see that play out in our neighbourhoods."

Josh Greenberg, professor of communication and media studies at Carleton University, echoed many of McKenney's concerns.

He explored the issue in a series of tweets in which he argued the evidence of intimidation and harassment, alongside the blatant flouting of public health measures and limiting access to key city infrastructure, do "not meet a common definition of 'peaceful.'"

The #Ottawa protests may have been non-violent, but there were plenty of threats, obscenity and violent imagery. #swastikas #cdnpoli

"By what common understanding of the term does what we are seeing on the ground, on TV, in our social media feeds qualify as 'peaceful protest?'" he wrote. "Is it merely the absence of physical violence and injury? That’s not unimportant but is insufficient as a definitional threshold."

Greenberg did not respond to request for an interview on Sunday.

Fareed Khan, founder of Canadians United Against Hate, described the protests as a threat to political stability and "peace-loving" Canadians.

"People do have a right to peacefully protest. I've been involved in organizing a number of these sorts of things," said Khan.

"But you know what we didn't do? We didn't disrupt an entire city ... we didn't call for the unseating of the government. We didn't intimidate and threaten people who didn't agree with us."

Khan said the demonstrations don't have to come to blows to jeopardize public safety. He said some protesters have refused to wear masks in indoor venues, and suggested the mass gathering could become a COVID-19 "superspreader event" that would have deadly consequences far beyond those who attended it.

He added that Canadians United Against Hate's planned in-person vigil in Ottawa marking the fifth anniversary of a deadly shooting at a Quebec City Mosque was cancelled on Saturday due to safety concerns.

Freiheit alleged that a member of the shelter community was assaulted by protesters, and a security guard who came to his aid was threatened and called racial slurs. Ottawa police have reached out to Shepherds of Good Hope to investigate the incident, a service spokeswoman said Sunday evening.

Khan said the public response to this weekend's demonstrations exposes a racist double standard in civil resistance, suggesting protests advocating for the rights of those who are Black, Indigenous or people of colour have faced much harsher opposition for causing far less disruption.

"This smacks of racism and white privilege," he said. "If you had a Muslim, or a brown person, or an Indigenous person who organized such an event and called for unseating the government of this country, security forces would have been down on them like a bag of hammers."

— With files from Laura Osman