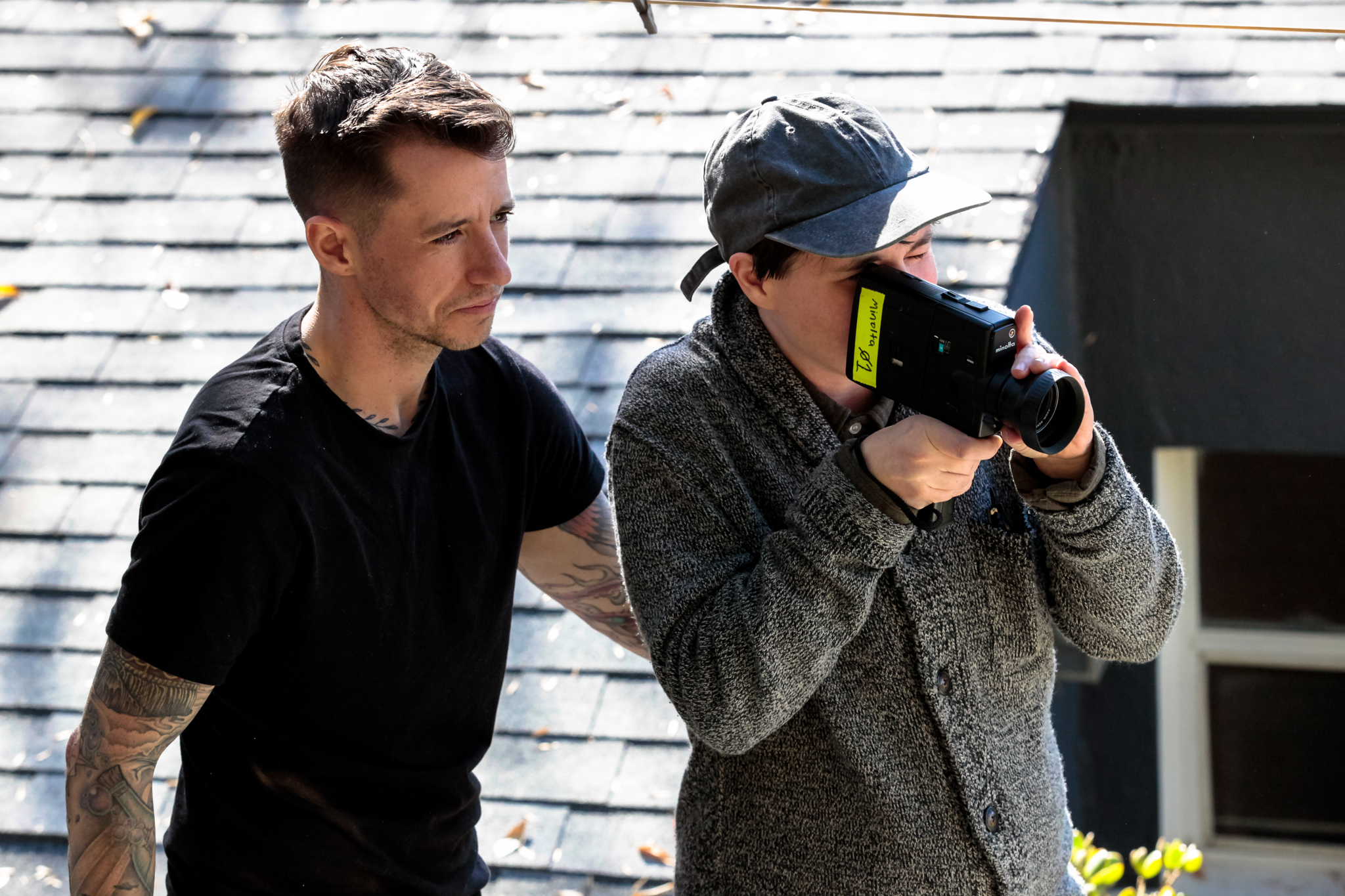 Director Chase Joynt on the set of Framing Agnes with Aubree Bernier-Clarke. Photo by Michelle Felix
Previous story
Next story

Chase Joynt seeks a more expansive and nuanced telling of trans stories, and he’s not afraid to experiment with genre in Framing Agnes, a mix of creative and documentary filmmaking that won two awards at Sundance on Friday.

In the film, Joynt directs from on screen in multiple modes: acting out transcripts of historical academic interviews with trans actors in a ‘50s-style frame, interviewing those actors about how they relate to their characters, based on real people, in a couch confessional style, and simultaneously running a discourse with trans historians and academics.

“It's such a complex arrangement and dynamic,” he said, about playing the role of the interviewer in a story about trans people being historically scrutinized. “And thinking about the production of documentary film, who I am as an interlocutor, as an intermediary, as an interviewer becomes a significant consideration.”

On Friday afternoon, the Sundance Film Festival recognized this breaking of the fourth wall with its innovator award for the “most cutting edge and forward-thinking film” and the audience award for films screened in its NEXT category at the virtual festival, which took place this month.

Joynt plays a talk show-style host channelling the words of Prof. Harold Garfinkel, a professor emeritus at the University of California Los Angeles who created the term ethnomethodology, or the study of how social order is created through interaction, which was the focus of his life’s work.

The professor/host exudes jocular familiarity while probing his trans subjects — what IndieWire calls “a befuddled ringleader, cloaking his probing questions in a naively paternalistic newscaster voice.”

Those patients include the titular Agnes (played by Zackary Drucker), a high-profile case study who was interviewed by Garfinkel and his colleagues at the UCLA gender clinic in the 1960s and later admitted she lied to the researchers and clinicians in order to access the surgery she needed.

Agnes, much like the film, is complex. As trans historian Jules Gill-Peterson explains in the opening scenes, her story has been read as either the cautionary tale of a trickster or a plucky protagonist thriving against the odds.

But the film is also about the stories obscured by Agnes, whom Garfinkel chose to spotlight in his research while others he interviewed did not receive the same notoriety. Joynt and his friend and collaborator, sociologist Kristen Schilt, uncovered some of these lesser known case studies several years ago and have been chewing over them ever since.

Chase Joynt seeks a more expansive and nuanced telling of trans stories, and he’s not afraid to experiment with genre in Framing Agnes, a mix of creative and documentary filmmaking that won two awards at Sundance on Friday. #Sundance

They include the often-invisible trans masculine characters of history, one of whom was a playful and easygoing teenager (15-year-old Jimmy, played by Stephen Ira) who would often joke around when he was speaking with the UCLA professors, and Georgia (played by Angelica Ross), a Black trans woman who struggled to get by in the U.S. South.

Schilt is “the institutionally embedded cis punk academic” who also shows up on screen. She and Joynt started thinking about the story of Agnes in 2014.

They discovered the case files in 2017 and made a short film about them “shot on credit cards and favours from friends” that premiered at Tribeca in 2019. That proof-of-concept helped them win enough grants to expand it into a feature project.

Joynt said it made sense to present the archival footage in the way Framing Agnes did because there was an obvious thread running through the questions asked of trans and gender-nonconforming people in academic research and later by television journalists and then talk show hosts.

“The history of interviewing trans and gender-nonconforming people is a history of violent encounters. Whether it's doctors or therapists or talk show hosts, the interview is a form of interrogation,” he said.

Doing so allows Joynt and the accomplished all-trans cast (which includes Max Wolf Valerio as Henry, Jen Richards as Barbara and Silas Howard as Denny) to “trouble those terms together” as they animate previously undiscovered case files from the UCLA gender clinic in the 1950s.

“(We can) trouble the terms of the engagement, trouble the power of the conversation, who is actually in control of what is being said and how,” he said, pointing out the production’s heavy use of reverse shots so the audience looks back at where the power is in the room.

At the same time, the Toronto born-and-bred Joynt says his debut as a solo director must also reckon with the paradox of being part of an expanding universe of trans-created and trans-centred media receiving critical acclaim at a time of “extraordinary backlash, medical, legal and otherwise, against the lives and rights of trans people.”

“We all know the underside of visibility is vulnerability, and that so often visibility can produce a fantasy of social change that obscures the ongoing context of violence against trans people.”

Toronto subway riders may know some of Joynt’s work already; he worked on John Greyson’s series of one-minute whodunnit vignettes screened on TTC station platforms for several months in early 2013.

Joynt calls the auteur of New Queer New Cinema a mentor, and said his work was inspired by Greyson’s cinema at the peak of the AIDS crisis that was defiant and urgent in support of those most affected and “disrupting form to get those stories out.”