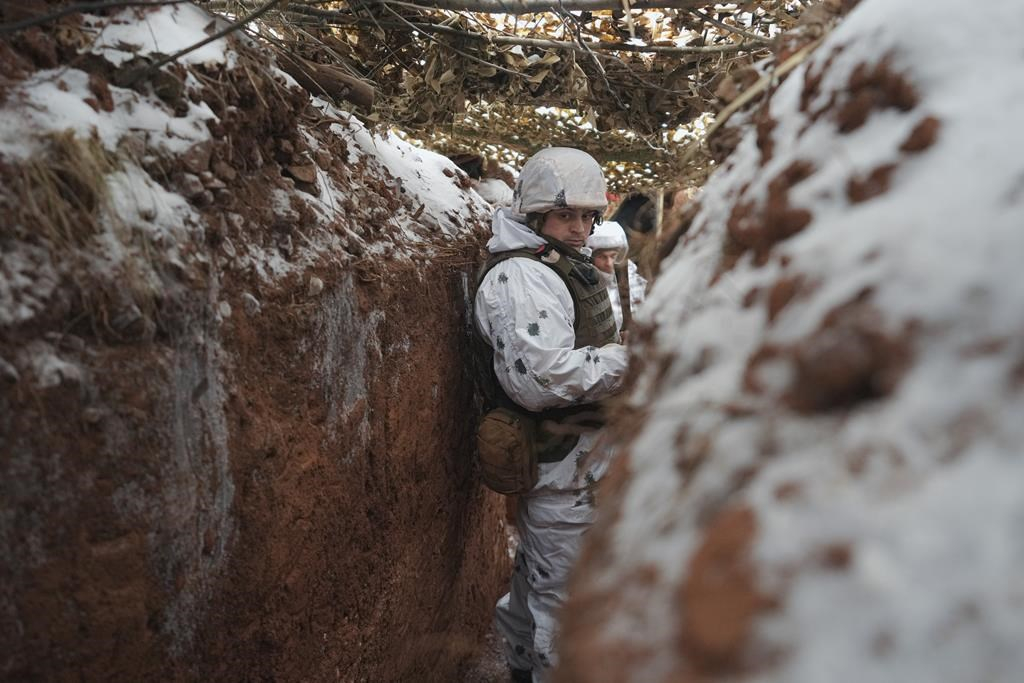 Ukrainian servicemen stand in a trench at a frontline position in the Donetsk region, eastern Ukraine, Monday, Jan. 31, 2022. Photo by: The Canadian Press/AP/Vadim Ghirda
Previous story
Next story

OTTAWA — All parties in the House of Commons agree that Canada must stand in solidarity with Ukraine but they're in sharp disagreement over how best to do that.

In an emergency debate Monday night on Russia's military buildup along its border with Ukraine, Prime Minister Justin Trudeau reiterated his government's commitment to expand and extend a military training mission in Ukraine, provide a $120-million loan and other non-lethal equipment, as well as development and humanitarian aid.

Trudeau also reiterated his government's commitment to work with allies in Europe and the NATO military alliance to impose co-ordinated sanctions on Russia, should it invade Ukraine.

"We're always stronger together and we won't be intimidated," he said.

But Conservative Leader Erin O'Toole dismissed those measures as "empty words" and "half measures," slamming the government for failing to provide the one thing Ukraine wants most: lethal defensive weapons.

"Russia outnumbers Ukraine four to one in military personnel, 22 to one in fighter planes, 15 to one in attack helicopters and five to one in battle tanks," he said.

"They're asking for our help at their hour of need and other allies have responded ... Where is Canada?"

Russia has positioned about 100,000 troops at Ukraine's border along with tanks and other heavy artillery, raising fears across Europe and the NATO military alliance of an imminent invasion — something Russia has denied.

O'Toole accused the Liberal minority government of doing nothing other than post an embarrassing series of photos on Twitter of cabinet ministers holding up signs displaying the hashtag "#stand with Ukraine."

MPs disagreed over how best to help #Ukraine in an emergency debate at the House of Commons Monday. #cdnpoli

But NDP Leader Jagmeet Singh said Canada must work with its allies to find a diplomatic solution to the conflict, which he argued is taking a heavy toll on millions of Ukrainian civilians.

"Escalating hostilities could lead to further mass displacement, a refugee crisis and an untold number of casualties," he warned, adding that provision of lethal weapons would only escalate tensions.

New Democrats, he said, believe that "peace is achievable only through diplomacy."

Bloc Quebeois MP Stephane Bergeron, meanwhile, argued that there can be no diplomacy without direct negotiations with Russia.

He accused NATO countries of engaging in brinksmanship and "alarmism" over an imminent invasion, even though both Russia and Ukraine agree that is not in the cards. And he said Canada's decision to withdraw non-essential diplomatic personnel from Ukraine will only increase tensions.

PM Trudeau has these words for Ottawa protesters: 'We are not intimidated'