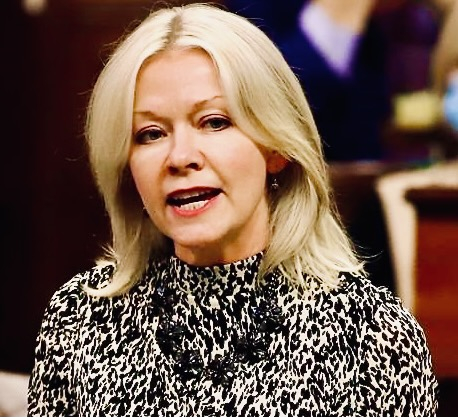 Conservative MP Candice Bergen rises during question period in the House of Commons on Parliament Hill in Ottawa in Ottawa on Wednesday, December 15, 2021. Photo by: The Canadian Press/Patrick Doyle
Previous story
Next story

OTTAWA — Erin O'Toole was ousted from the party's top job, leaving his former deputy Candice Bergen to helm a divided caucus until its members elect a new leader with a new direction.

The Manitoba MP, who served as a minister of state in former prime minister Stephen Harper's Conservative government, was chosen by her colleagues Wednesday evening out of nine candidates running for the job of interim leader.

Conservative MPs and party members now once again find themselves taking on the soul-searching exercise of finding a new permanent leader.

As for what it will take to bring everyone together, one Alberta MP didn't mince words.

"It's going to be a bloody tough job," Ron Liepert said.

This is the third leadership race for the party since Harper stepped down after losing power to the Liberals in 2015.

Unlike the previous two times when the party lost its leader, O'Toole was forced out abruptly while fighting to keep his job.

On Wednesday, 73 of the 119 Conservative MPs voted by secret ballot, after meeting via video conference, to have him out of the top job. Forty-five MPs endorsed O'Toole. Ontario MP Scott Reid, who is the national caucus chair, said he did not vote.

In his farewell video on social media, O'Toole, 49, said he had officially resigned as party leader and would remain in his seat as the MP for the southern Ontario riding of Durham. He also pledged his loyalty to the next Conservative leader, urging all in the party to do the same.

He became the first party leader to be removed under a process outlined in the Reform Act, legislation passed in 2015 that allows a caucus to give members the power to trigger a leadership review. Conservative MPs decided they wanted that ability after O'Toole lost last year's federal election and they were the only party to adopt the process.

O'Toole, who was elected leader in August 2020, offered some parting advice.

"This country needs a Conservative party that is both an intellectual force and governing force. Ideology without power is vanity," he said. "Seeking power without ideology is hubris."

O'Toole's leadership was defined by his insistence to party members that Conservatives must change and modernize if the party hoped to grow its support in major cities and suburbs.

After news broke Monday that one-third of his MPs wanted him gone, O'Toole said he wasn't going anywhere. He painted the dissident MPs as believing the party should hold more extreme views resembling those of Ontario MPP Randy Hillier and ex-MP Derek Sloan.

O'Toole said he was offering a vision of building a more inclusive party. He and his team then got to work over the next day-and-a-half before the vote, trying to shore up their support.

Three caucus sources who spoke on the condition of anonymity to discuss internal matters said O'Toole told his colleagues during the caucus meeting Wednesday that if members voted for him to stay, he would undergo an early leadership review by the membership ahead of the previously set timeline in 2023. His critics have spent months calling on O'Toole and the party's national council to do that.

But it came too late.

Many MPs remarked they felt more united and were ready for a fresh start.

"Erin was a long time coming," said Edmonton MP Matt Jeneroux, who said he didn't support O'Toole. "You can't run in the leadership on one thing and then do something else."

B.C. MP Mark Strahl, who was one of the few in caucus to publicly criticize O'Toole's leadership for being inconsistent, said he hopes the party finds a permanent leader soon.

Many of them also commended O'Toole for his service, with some remarking on the toll that doing the job during the COVID-19 pandemic has taken.

O'Toole thanked his wife Rebecca and appeared to grow emotional when expressing appreciation to his children, Mollie and Jack, whom he said "would be seeing a little more of me than over the last 18 months."

The corporate lawyer and Air Force veteran was first elected in a byelection in 2012 in Durham, a region his father also represented when he was in provincial politics.

He served as minister of veterans affairs under Harper. After the Conservatives became the Official Opposition and Harper resigned as leader, O'Toole put his name forward to be interim leader. He lost that bid but ran for the permanent party leadership in 2017. He placed third behind Andrew Scheer.

One of the major knocks critics had against O'Toole began after the 2020 race, where he ran as the "true blue" candidate over former cabinet minister Peter MacKay. The former Nova Scotia MP had served as leader of the Progressive Conservative party before it merged with the Canadian Alliance to form the modern Conservative Party of Canada.

Then as leader, he shifted in a more moderate direction. In an attempt differentiate himself from Scheer — whose social conservative views dogged him in the 2019 campaign — O'Toole promoted his support of access to abortion and LGBTQ rights.

He also embraced carbon pricing, despite the fact that some of his MPs, including many in Western Canada, fought for years against the Liberal government's carbon-pricing mechanism, which the Conservatives called a "carbon tax."

O'Toole had pledged during the leadership contest that it would be scrapped.

He also raised the ire of firearms activists and social conservatives by reversing course on promises midway through the last year's federal election campaign upon being attacked by the Liberals.

Critics like Sen. Denise Batters, who last November began petitioning the party to hold an early leadership review, said his flip-flops damaged his image with Canadians and made him untrustworthy.

Others also point out that O'Toole finished with two fewer seats than Scheer did in 2019, and lost seats in Alberta, home to a considerable portion of the Conservative base.

Since his election defeat, O'Toole has struggled to bring his caucus together on issues like vaccine mandates, with many of his MPs feeling the party needed to take a tougher stand against such policies.

He has also faced pressure to more forcefully oppose a controversial secularism law in Quebec and got pushback from members of the party's social conservative wing for fast-tracking a government bill to ban conversion therapy for LGBTQ Canadians.

This report by The Canadian Press was first published Feb. 2, 2022.