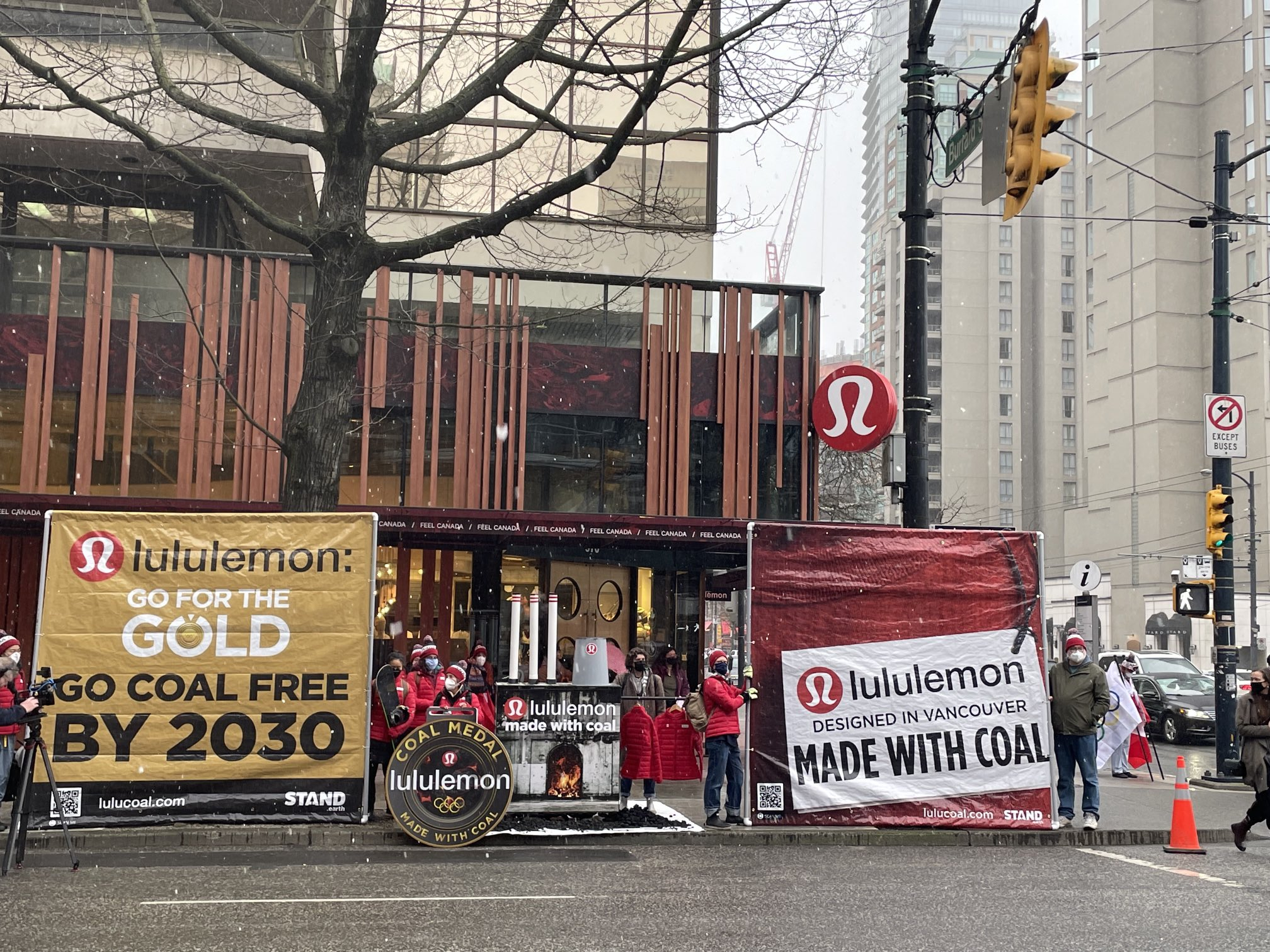 The action comes just days before the opening ceremony of the Winter Olympics where Team Canada will be sporting the Lululemon logo from head to toe. The company is the official outfitter for Canadians competing in the Olympic and Paralympic Winter Games. The brand’s already high profile will get an additional boost as athletes take their spots on the podium, do interviews and participate in the opening and closing ceremonies.

That exposure combined with a lack of effort from Lululemon to go green doesn’t sit well with Muhannad Malas, senior climate campaigner with the Fossil Free Fashion Campaign at Stand.earth, who points to an analysis from the group showing 48 per cent of the energy used to power Lululemon factories in Asia comes from coal. The brand manufactures its products in factories in countries such as Vietnam, Cambodia, and China.

Canada’s National Observer reached out to Lululemon for comment directly after the protest, but didn’t hear back in time for publication.

Coal has long had the reputation as the world’s dirtiest fossil fuel — it releases the most carbon and makes up 46 per cent of carbon emissions worldwide. In Canada, the federal government has committed to phasing out coal-fired electricity by 2030, while putting in place a $25-million coal transition fund.

Fashion plays a significant part in that, explained Malas, who notes the industry is a huge polluter, making up five to eight per cent of global climate emissions. Stand.earth has called out other brands — such as Under Armour and Armani — for their reliance on coal, giving them both Fs on its Fossil-free Fashion Scorecard in 2021. Lululemon got a D-, with the organization noting the brand has “shown some willingness to advocate for policies to bring down global GHG emissions.”

Although Stand.earth has been calling for Lululemon to take climate action for more than a year with its lululemon’s coal pollution campaign, it's the first time it has organized a protest. Because the clothing company presents an image of health and sustainability, Malas said many people aren’t aware of the climate impact and that it’s worsening — the brand's emissions increased by 12 per cent in 2020.

Protesters with Stand.earth set up a mock coal plant outside a Lululemon store in downtown Vancouver on Wednesday, Feb. 2, 2022, to highlight the brand's reliance on coal. Video courtesy of Stand.earth

“One of the things that we've seen from Lululemon has been lots of big talk about sustainability, and often misplaced efforts. Instead of tackling the biggest sources of emissions and pollution in their supply chain, we've seen pilot initiatives [like] switching to recycled polyester,” he said.

@mmalas of @standearth points to an analysis from the group that shows 48 per cent of the energy used to power @lululemon factories in Asia comes from #coal.

“... That in itself is a false solution because recycled polyester continues to be non-circular. And because it's potentially going to increase the reliance on fossil fuels as a source of material in the textile and apparel industry.”

Giving Lululemon space on the world stage is contributing to greenwashing, said Malas, and skirts the fact that burning coal contributes significantly to poor air quality in the Olympic host city of Beijing, while worsening conditions for winter sports.

The call is for Lululemon to get coal out of its supply chain by 2030.

“Lululemon … is a huge purchaser of products and energy from those countries, and they have significant market power to be able to work with policymakers to start to phase out coal and switch to renewables,” he said.

“And to invest in the infrastructure that's needed for these countries to be able to transition to renewables in the next decade.”

The group attempted to deliver a “coal medal” (measuring four feet in diameter) to employees inside the store and then posed in Team Canada Olympic outfits beside a fake coal plant. Erdene Batzorig, digital campaigner with the Fossil Free Fashion Campaign at Stand.earth, said although they were asked to leave the store, their demonstration outside attracted lots of interested passersby who were surprised to hear about the brand’s involvement with coal.

“I know we got our message across, we feel really excited. And while Lululemon is in the global headlines representing Canada on the global stage, we want to make sure that the public knows as much as possible about the coal problem,” she said.

“Because it's not really about blaming Lululemon [or] pointing fingers, it's highlighting the solutions that we can take — which is to ditch coal and go renewable by 2030 in their supply chains for the health of its workers and for the health of us.”

I was shocked when I couldn't

I was shocked when I couldn't find a single piece of Lululemon clothing made from natural fibres. I thought for sure Lululemon would be on top of the sustainability trend. Nope! All their branded fabrics, "Luxtreme™", "Nulux™", "Nulu™", "Everlux™" and "Luon™" are just ridiculous marketing spins on more well-known brand names for plastic (made from Petroleum), aka Nylon, Lycra and elastane. You're wearing fossil fuels, people!

Another thing Lululemon can