GoFundMe called to Commons over fears fundraising for Ottawa protests is linked to U.S. extremists 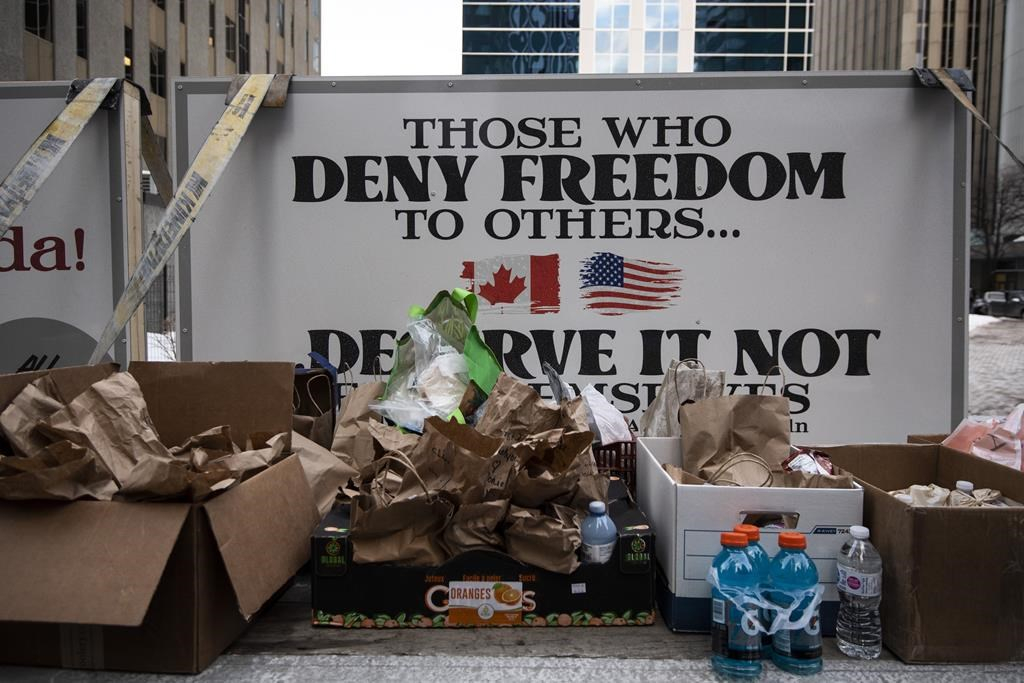 Food provisions are seen on the back of a flatbed truck parked on Metcalfe Street, Sun. Jan. 30, 2022. Photo by: The Canadian Press/Justin Tang
Previous story

OTTAWA — A parliamentary committee has called on GoFundMe representatives to testify about how it ensures that money raised on its platform isn’t used to promote hate, such as antisemitism and white supremacy.

New Democrat MP Alistair MacGregor won the unanimous approval Thursday of the House of Commons public safety committee to invite representatives from the crowdfunding website to answer questions about its security measures to ensure its funds are not used to promote extremism.

GoFundMe has been used to raise more than $10 million to support the anti-vaccine mandate protesters that have brought downtown Ottawa to a standstill for close to a week.

GoFundMe said Wednesday it was pausing and reviewing the fundraising campaign to ensure it complies with its terms of service, which stipulate money raised can't be used to support hate, violence, harassment and bullying, among other anti-social behaviours.

MacGregor said he brought the motion forward because he was concerned by a statement by Ottawa police the previous day that said a "significant element" from the United States had been involved in funding the Canadian protest.

"We have questions about the anonymity of those donors, whether or not they live in foreign jurisdictions, and what kind of controls GoFundMe has in place to make sure that the money is not funding extremist views like antisemitism, white supremacy and other forms of hate that we saw in a prominent display amongst some of the members of the protest in Ottawa," the British Columbia MP said in an interview Thursday.

MacGregor said Canadian MPs need to subject GoFundMe to a closer examination of its anonymous donors.

"We don't really have an idea because of the anonymous nature of those donors as to what their prime motivation is or what their endgame is. It could be quite nefarious; it could be quite innocent. We don't know and that's a very real, big problem."

The motion calls on the committee to invite representatives of the company to "appear as soon as possible to answer questions," including how it prevents the influx of foreign funds, and what it is doing to ensure that the $1 million that it has already released isn't being used to foster hate.

It was not immediately clear if GoFundMe would comply. The company did not immediately respond to a request for comment on the committee's decision. In its Wednesday statement, the company said it requested more information from the organizer regarding the use of funds to ensure it is compliant with its terms of service.

Go Fund Me called to the House of Commons over fears fundraising efforts for trucker protests are linked to U.S. #extremists. #cdnpoli

Ottawa Mayor Jim Watson asked GoFundMe on Thursday morning to keep the funds frozen until the "occupation" is over, he wrote in a letter to city councillors.

"They have heard our case and have been made aware of the unlawful acts that have been committed as part of the protest," Watson wrote.

"They are evaluating the situation from a number of angles and have assured us that the funds will remain frozen for several days while they conduct further due diligence related to their terms of use and community guidelines."

Tamara Lich, a protest organizer, said during a news conference Thursday that the lawyer for her group has given GoFundMe the information it was seeking and was confident the suspension of funds would be lifted.

"I am hoping to hear from GoFundMe soon so that we can get the money to the truckers and keep our protest for freedom moving forward," said Lich.

There has been no shortage of foreign commentary on the Ottawa protests, especially from the United States. Both Donald Trump and Donald Trump Jr. have voiced their support, while one Texas Republican member of the House of Representatives falsely said Prime Minister Justin Trudeau had fled to the United States to seek refuge from the protest.

The American social media platform Gab, known for its support of Trump and which has been accused of fomenting antisemitic and other extremist views, took note of GoFundMe's fundraising pause and offered a workaround for people who still wanted to donate to the Canadian protesters.

The platform provided a link to a series of cryptocurrency websites to help donations.

Anti-hate watchdogs on both sides of the Canada-U.S. border said internet companies and platforms have to be more vigilant in preventing their websites from being platforms for hate promulgation.

"I would encourage these companies, social media companies, if they can, to reduce the amount of exposure … if they can take this down until we figure out what's going on," said Brad Galloway, the coordinator of the Centre on Hate, Bias and Extremism at Ontario Tech University.

Cassie Miller, a senior researcher with the Alabama-based Southern Poverty Law Centre, said one of the most concerning trends in American and Canadian political discourse "is how opposition to COVID safety measures has brought together a wide swath of people from the far right.

"One of the most effective ways we can push back against the far right and the kind of violence it inspires is to stop the spread of misinformation, which means deplatforming bad actors and preventing misinformation from appearing on social media platforms in the first place."

This report by The Canadian Press was first published Feb. 3, 2022.