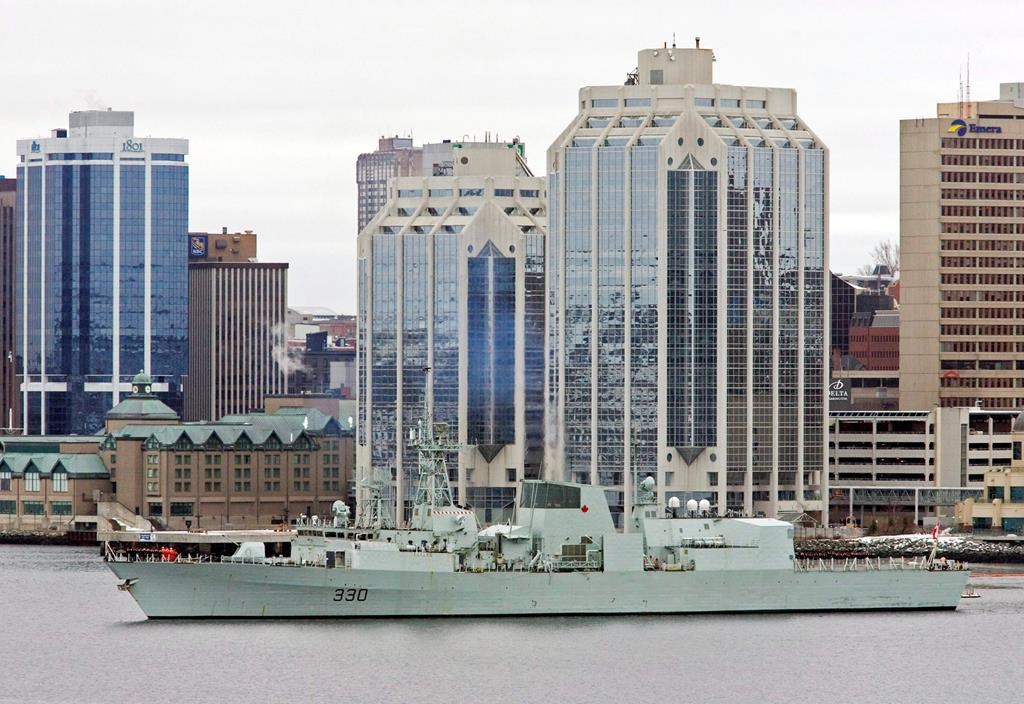 HMCS Halifax heads out of the harbour in Halifax on Thursday, Jan. 14, 2010. Photo by: The Canadian Press/Andrew Vaughn
Previous story

OTTAWA — The Canadian military's limits are set to be tested, experts say, with trade-offs likely needed to offset the deployment of hundreds of additional troops to reinforce the NATO military alliance’s confrontation with Russia in eastern Europe.

Prime Minister Justin Trudeau announced on Tuesday that Canada will deploy an additional 460 Canadian troops to help NATO in its standoff with Russia, including an artillery unit, a naval frigate and a surveillance aircraft.

The pledge came days after Defence Minister Anita Anand acknowledged concerns about stretching the military too far given its numerous existing commitments at home and abroad, aging equipment and a growing shortage of personnel.

Retired lieutenant-general Guy Thibault, who previously served as vice-chief of the defence staff, said he has “no doubt the Canadian Armed Forces is strained” from all its competing demands in Ukraine, Latvia and elsewhere.

And while there may be some flexibility, Thibault said the emergence of the crisis in eastern Europe as Canada’s top international commitment means other missions “may well need to be reassessed as we look at what can be sustained.”

The deployment of a second frigate to Europe, where Canada already has one positioned on a more or less permanent basis, will almost certainly put additional pressure on the navy, said defence analyst David Perry of the Canadian Global Affairs Institute.

That's because the navy is dealing with a shortage of about 1,000 sailors at the same time as Canada's 12 Halifax-class frigates are starting to show their advanced age, with part of the fleet in dock for maintenance and upgrades at any given time.

“We only have five or six of them at any given time that are really able to deploy internationally … so that's a big chunk of our fleet, especially when we're still trying to send two frigates each year over to Asia,” Perry said of basing two frigates in Europe.

The Royal Canadian Navy did not immediately respond to questions on how it planned to sustain the deployment of a second frigate to Europe, including whether there were any plans to scale back its operations in the Asia-Pacific region.

Canada currently has only one frigate, HMCS Montreal, deployed abroad. It is currently operating off the coast of Italy with NATO.

Questions also remained about the government’s plan to send a CP-140 Aurora surveillance aircraft to bolster NATO’s efforts in Europe, with uncertainty over where the plane will come from and where it will be based.

Such maritime patrol aircraft previously provided intelligence and targeting information during NATO’s war against the Libyan government in 2011, as well as the U.S.-led fight against the Islamic State group in Iraq and Syria.

More recently, Auroras have been working alongside Canadian frigates in the Pacific to assist with a United Nations-led counter-smuggling effort off the coast of North Korea, known by the military as Operation Neon.

Asked when Canada will deploy another frigate and CP-140 on Operation Neon, Defence Department spokesman Daniel Le Bouthillier said no date had yet been set.

“As in any planning process, the Canadian Armed Forces takes all current factors into account when planning operations,” he added.

As for the deployment of a 100-soldier artillery unit to Latvia, Perry did not see that being a large additional burden on the military, including from a logistical perspective, given Canada already has 540 other soldiers in the Baltic state leading a NATO battlegroup.

However, he noted Canada has a large number of other military commitments, including the mission in Iraq, the deployment of hundreds of military trainers to Ukraine (who are currently in Poland), and COVID-19 support at home.

All of this a time when the Armed Forces has been battered by months of upheaval caused by fresh revelations of sexual misconduct and hate within the ranks, and seen recruitment and training affected by pandemic-related restrictions.

One of the big questions over the next month will be whether, as the Armed Forces ramps up its presence in eastern Europe, the Liberal government will decide to end or otherwise scale back Canada’s anti-Islamic State mission in the Middle East.

The mandate for that mission, which has already shrunk several times in recent years and currently includes about 350 military personnel, most in Kuwait but some in Iraq, Lebanon and Jordan, is set to expire at the end of March.

The government and military have said very little about the Islamic State for the past few years, and University of Ottawa professor Thomas Juneau, one of Canada’s top Middle East experts, said it’s difficult to know what the Liberals intend.

While Juneau argues those factors all remain relevant, the reality is that the nature of the mission has changed in many respects, with the focus as much about checking Iran’s influence as defending against an Islamic State resurgence.

And throughout this evolution, Canada has steadily withdrawn troops from the region; the current deployment is down from about 500 Armed Forces members in the region at this time last year, which itself was a drop from the previous high of 850.

“I would assume that whenever the government makes a decision (on the anti-Islamic State mission),” Juneau said, “we'll also hear about it very much at the last minute and … they will also try to minimize the news as much as possible.”