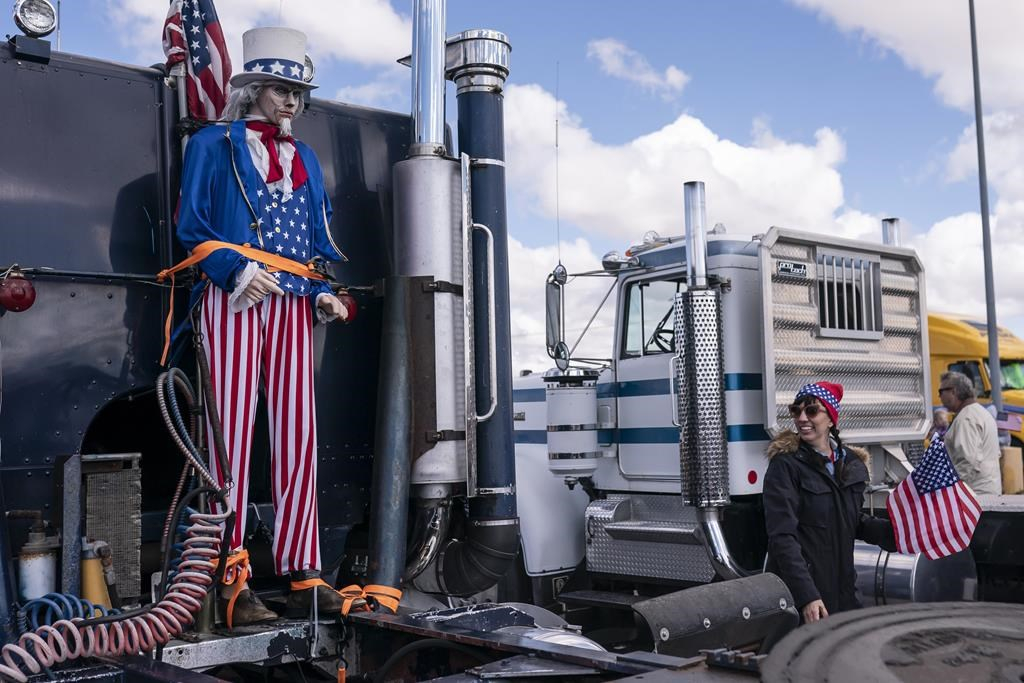 A supporter walks past a mannequin of Uncle Sam at the beginning of a trucker caravan to Washington, D.C., called The People's Convoy Wednesday, Feb. 23, 2022, in Adelanto, Calif. Photo by: The Canadian Press/AP/Nathan Howard
Previous story

WASHINGTON — An Ottawa-inspired "freedom convoy" is making its way to the U.S. capital, but as of now, it has little else in common with its Canadian namesake.

Where the protests in Canada's capital were organized, unified and bent on disruption, the D.C. endeavour appears amorphous and is still taking shape.

One contingent departed Wednesday from a staging area in California, with others expected to join up in time for President Joe Biden's state of the union speech next Tuesday.

The Pentagon has agreed to deploy 700 unarmed members of the National Guard to help with traffic, but beyond that, authorities aren't sure what to expect.

The protests in Canada coalesced around deep-seated frustration with a wide range of COVID-19 restrictions, including vaccine and mask mandates.

But in the U.S., many of the most stringent restrictions have already started to ease, leaving many to wonder what is left to complain about.

It's also not entirely clear whether protesters will enter the city itself, or disrupt traffic along Interstate 495, the highway known as the Beltway that encircles D.C.

Kyle Sefcik, a protest organizer who also hopes to unseat Larry Hogan as governor of Maryland, posted a video to social media this week promising a peaceful and lawful protest.

"The world is watching us," Sefcik says in the video. "If what happened in Canada happens to us here in the land of the free, then freedom as we know it is gone."

Sefcik has applied for a permit to stage a protest on the National Mall, the strip of parkland that runs between Capitol Hill and the Washington Monument.

#Ottawa style 'freedom convoy' is Washington bound, but fails to catch fire like it did in #Canada. #cdnpoli #uspoli #freedomconvoy

That application anticipates a crowd of between 1,000 and 3,000 people.

White House press secretary Jen Psaki said earlier this week that officials are monitoring the situation, including Homeland Security Adviser Liz Sherwood-Randall, who was in close contact with counterparts in Canada at the height of the protests there.

"We are closely monitoring, closely watching, and working with state and local authorities … to continuously assess the threat environment and keep our communities safe."

Capitol police, meanwhile, have yet to confirm whether they will erect protective fencing around the building, which lingered for months following last year's deadly Jan. 6 protests.

"They have a good handle on what the expectation is," House Speaker Nancy Pelosi told a news conference Wednesday, noting that the protests are expected to linger later than March 1.

"Some of it won't even come until after the state of the union, but no, I feel confident. Now, people said, 'Don't let them put up a fence.' That's not my call."

The city's Homeland Security and Emergency Management Department says it is "aware of and prepared for" potential demonstrations taking place "in the weeks ahead."