As 50,000 people flee the invasion of Ukraine, some Canadians stay to help those left behind 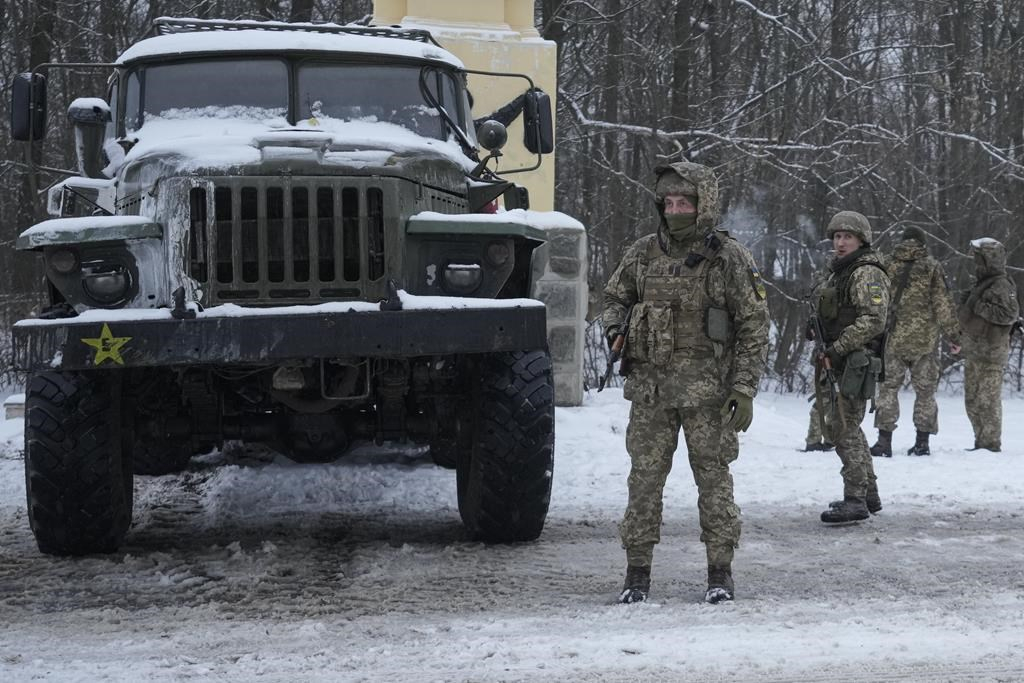 Chad Martz has spent the last few days in a mountainous region of western Ukraine purchasing food and basic supplies for those who've fled their homes due to the Russian invasion of the country.

But the Canadian citizen, who has been in the country for months due to his work with a British Columbia aid organization, isn't currently going anywhere himself.

"The area that I'm in ... hasn't received any attacks, so it's been staying relatively calm," he said in a phone interview on Friday.

"It's going to have to be pretty drastic for us to to leave. We're in a very good position to provide the much needed care to people who are leaving everything."

Martz, his Ukrainian wife and their teenage daughter travelled to Ukraine in July as part of their work with Hungry For Life, an aid group based in Chilliwack, B.C. Martz said he's been travelling to Ukraine regularly for the last 18 years.

The ongoing bombings of roads and bridges since Russian began its invasion of Ukraine this week have made it difficult for people to travel from the country's capital of Kyiv and other areas in eastern and northern Ukraine to the area where Martz is, in the Carpathian Mountains, he said.

But the numbers of those seeking shelter has been growing steadily, he said, noting that people arriving in his community are hosted at local churches that have needed help securing supplies.

"We're just coming in and providing the resources: food, blankets, bedding, mattresses, and supplying them so that they could be caring for those who are coming in," he said.

"It's changing from hour to hour or so, the numbers, yesterday, were like 60 (people) and then we were up to 130. And now, a few hours ago it was 200 people coming in. It just keeps ballooning."

The UN High Commissioner for Refugees said Friday that more than 50,000 Ukrainian refugees have left their country in less than 48 hours and many more are moving towards its borders.

As 50,000 Ukrainians flee the war, some Canadians stay to help those left behind. #Ukraine #RussianInvasion #cdnpoli

Martz said most expats have been looking for ways to get out of Ukraine or to move within the country to safer locations while others have chosen to shelter in their place.

A spokesman for Global Affairs Canada said about 800 Canadians are currently living in Ukraine according to a registration service for Canadians abroad, but there might be more as registration is voluntary.

"We are urgently issuing travel documents for affected Canadians, permanent residents and their immediate family members," Trudeau said. "We are launching a new dedicated phone line for anyone at home or abroad with urgent Ukraine related immigration questions."

Mykhailo Vynnytskyi, who was born and raised in Canada but has lived in Ukraine for 20 years, said he and his family have sought refuge in a rural area south of Kyiv.

The 51-year-old was at home in Kyiv with his wife and four teenage children when friends reached out to say the family should consider leaving the city on Thursday morning, shortly after Russian troops began to invade. Vynnytskyi said the city was chaotic by 7:30 a.m. as residents started to flee.

"We heard jets going overhead but we felt that we were relatively safe ... we decided to wait for the traffic to die down," Vynnytskyi said in an interview on Thursday.

The family left in the late afternoon and drove to their summer home about 120 kilometres south of Kyiv. The drive normally takes about an hour and half but with all the traffic it took them closer to four hours, Vynnytskyi said.

"Anybody that had the opportunity to leave, there was a fairly good chance that they were leaving," he said.

Vynnytskyi said he has been able to keep in touch with his mother and brother who live in Canada.

The author and professor said he's proud of what the Ukrainian Armed Forces have been able to do thus far but said the country needs more help.

For now, his family is taking things day by day.

"We’ve never had war come to us this close so there’s a certain amount of apprehension and fear at times … but at the end of the day this wasn’t something that was shocking to us," he said.

"We’ve been preparing for something like this to happen. We weren’t exactly prepared to have this extent of an invasion but an invasion was coming for the last month or so."

This report by The Canadian Press was first published Feb. 25, 2022.