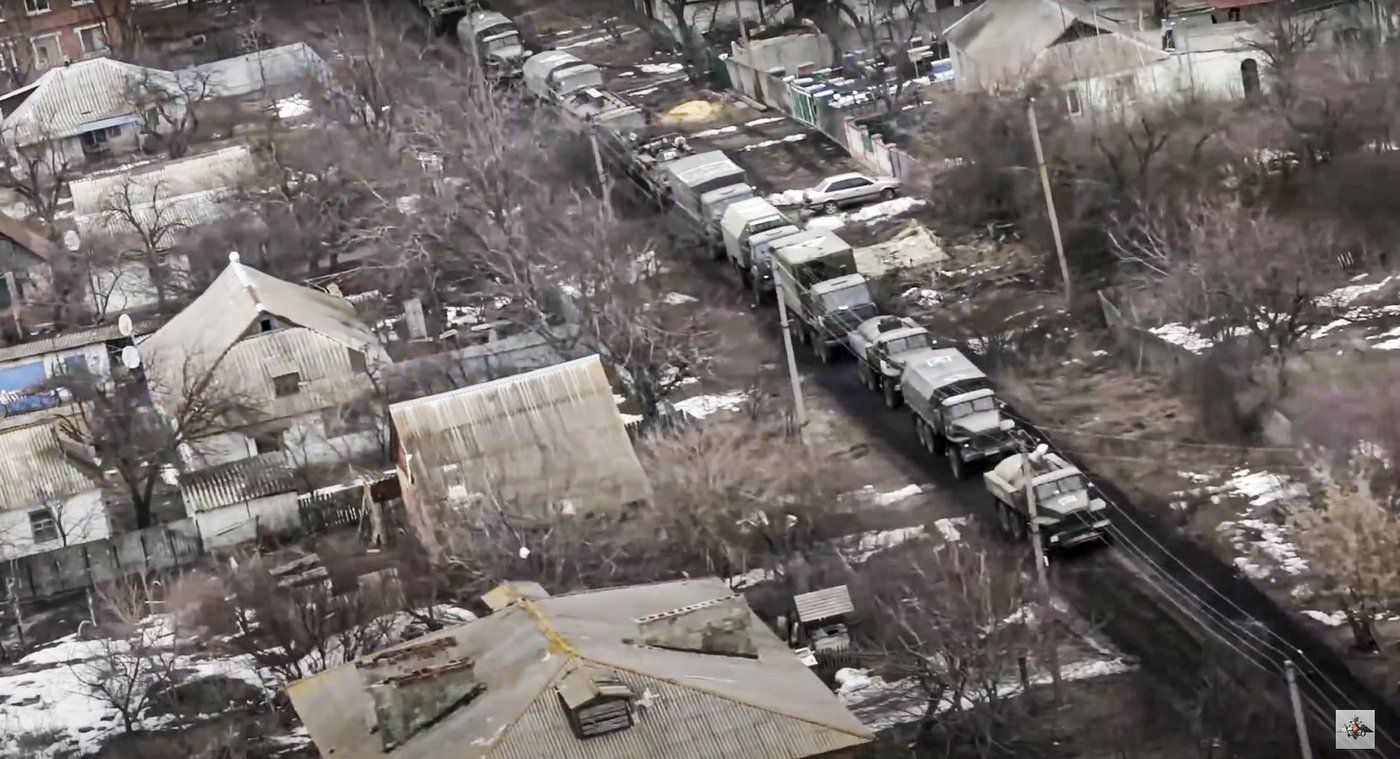 In this photo taken from video on Mar. 3, 2022, a view from the window of a Russian military helicopter as it flies over an undisclosed location in Ukraine. (Russian Defense Ministry Press Service via AP) Uncredited
Previous story
Next story

More than 1 million people have fled Ukraine following Russia’s invasion, in the swiftest refugee exodus this century, the United Nations said Thursday, as Moscow said it was ready for more talks to end fighting even as its forces pressed their assaults on the country’s second-largest city and two strategic seaports.

The tally the U.N. refugee agency released to The Associated Press was reached Wednesday and amounts to more than 2% of Ukraine’s population being forced out of the country in seven days. The mass evacuation could be seen in Kharkiv, a city of about 1.5 million people where residents desperate to escape falling shells and bombs crowded the city’s train station and pressed onto trains, not always knowing where they were headed.

With a column of tanks and other vehicles apparently stalled for days outside the capital of Kyiv, fighting continued on multiple fronts across Ukraine. A second round of talks aimed at ending the fighting was expected later Thursday in neighboring Belarus — though the two sides appeared to have little common ground.

“We are ready to conduct talks, but we will continue the operation because we won’t allow Ukraine to preserve a military infrastructure that threatens Russia,” Russian Foreign Minister Sergey Lavrov said, adding that it would let Ukrainians to choose what government they should have.

Lavrov said that the West has continuously armed Ukraine, trained its troops and built up bases there to turn Ukraine into a bulwark against Russia — repeating Russian claims that it has used to justify its operation in Ukraine.

The U.S. and its allies have insisted that NATO is a defensive alliance that doesn’t pose a threat to Russia. And the West fears Russia's invasion is meant to overthrow Ukraine's government and install a friendly government.

Russia’s forces claimed to have taken complete control of Kherson, which would be the biggest city to fall in the invasion thus far. Britain’s Defense Ministry said that was possible, though not yet verified. The mayor said there were no Ukrainian forces in the city — but he said the Ukrainian flag was still flying over it.

Overnight, Associated Press reporters in Kyiv heard at least one explosion before videos started circulating of apparent strikes on the capital.

Russia’s Defense Ministry said it had knocked out a reserve broadcasting center in the Lysa Hora district, about 7 kilometers (4 miles) south of the government headquarters. It said unspecified precision weapons were used, and that there were no casualties or damage to residential buildings.

A statement from the general staff of Ukraine’s armed forces didn’t address the strikes, saying only that Russian forces were “regrouping” and “trying to reach the northern outskirts” of the city.

“The advance on Kyiv has been rather not very organized and now they’re more or less stuck,” military analyst Pavel Felgenhauer told the AP in Moscow.

At least 227 civilians have been killed and another 525 wounded since the invasion began, according to the latest figures from the office of the U.N. High Commissioner for Human Rights. Earlier, Ukraine said more than 2,000 civilians have died, a figure that could not be independently verified.

The U.N. office uses strict methodology and counts only confirmed casualties, and admits its figures are a vast undercount.

Still, the tally eclipses the entire civilian casualty count from the fighting in 2014 in eastern Ukraine between pro-Russian separatists and Ukrainian forces — which left 136 dead and 577 injured.

Lavrov voiced regret for civilian casualties, insisting that the military is only using precision weapons against military targets, despite abundant evidence of shelling of homes, schools and hospitals. However, he tacitly acknowledged that some Russian strikes could have killed civilians, saying that “any military action is fraught with casualties, and not just among the military but also civilians.”

In his latest defiant videotaped address, Ukrainian President Volodymyr Zelenskyy called on Ukrainians to keep up the resistance. He vowed that the invaders would have “not one quiet moment” and described Russian soldiers as “confused children who have been used.”

Moscow’s isolation deepened when most of the world lined up against it at the United Nations to demand it withdraw from Ukraine. The prosecutor for the International Criminal Court opened an investigation into possible war crimes. And in a stunning reversal, the International Paralympic Committee banned Russian and Belarusian athletes from the Winter Paralympic Games.

Felgenhauer said with the Russian economy already suffering, there could be a “serious internal political crisis” if Russian President Vladimir Putin does not find a way to end the war quickly.

“There’s no real money to run to fight this war,” he said, adding that if Putin and the military “are unable to wrap up this campaign very swiftly and victoriously, they’re in a pickle.”

Several parts of the country were under pressure.

Ukraine’s military said Russian forces “did not achieve the main goal of capturing Mariupol” in its statement, which did not mention the another important port, Kherson, whose status was unclear.

Putin’s forces claimed to have taken complete control of Kherson, and U.K. Defense Secretary Ben Wallace said Thursday that it was “possible — it’s not verified yet — that Russia is in control” there.

“Our view is that Kherson is very much a contested city,” the official said, speaking on condition of anonymity.

Zelenskyy’s office told the AP that it could not comment on the situation in Kherson while the fighting was still going on.

The mayor of Kherson, Igor Kolykhaev, said Russian soldiers were in the city and came to the city administration building. He said he asked them not to shoot civilians and to allow crews to gather up the bodies from the streets.

“We don’t have any Ukrainian forces in the city, only civilians and people here who want to LIVE,” he said in a statement later posted on Facebook.

The mayor said Kherson would maintain a strict 8 p.m.-to-6 a.m. curfew and restrict traffic into the city to food and medicine deliveries. The city will also require pedestrians to walk in groups no larger than two, obey commands to stop and not to “provoke the troops.”

“The flag flying over us is Ukrainian,” he wrote. “And for it to stay that way, these demands must be observed.”

Mariupol Mayor Vadym Boychenko said the attacks there had been relentless.

“We cannot even take the wounded from the streets, from houses and apartments today, since the shelling does not stop,” he was quoted by the Interfax news agency as saying.

Russia reported its military casualties for the first time in the war, saying nearly 500 of its troops have been killed and almost 1,600 wounded. Ukraine did not disclose its own military losses.

Ukraine’s military general staff said in a Facebook post that Russia’s forces had suffered some 9,000 casualties in the fighting. It did not clarify if that figure included both killed and wounded soldiers.

In a video address to the nation early Thursday, Zelenskyy praised his country’s resistance.

He said the fighting is taking a toll on the morale of Russian soldiers, who “go into grocery stores and try to find something to eat.”

“These are not warriors of a superpower,” he said. “These are confused children who have been used.”

Meanwhile, the senior U.S. defense official said an immense Russian column of hundreds of tanks and other vehicles appeared to be stalled roughly 25 kilometers (16 miles) from Kyiv and had made no real progress in the last couple of days.

The convoy, which earlier in the week had seemed poised to launch an assault on the capital, has been plagued with fuel and food shortages, the official said.

On the far edges of Kyiv, volunteers well into their 60s manned a checkpoint to try to block the Russian advance.

“In my old age, I had to take up arms,” said Andrey Goncharuk, 68. He said the fighters needed more weapons, but “we’ll kill the enemy and take their weapons.”

Around Ukraine, others crowded into train stations, carrying children wrapped in blankets and dragging wheeled suitcases into new lives as refugees.

In an email, U.N. refugee agency spokesperson Joung-ah Ghedini-Williams told the AP that the refugee count surpassed 1 million as of midnight in central Europe, based on figures collected by national authorities.

Shabia Mantoo, another spokesperson for the agency, said that “at this rate” the exodus from Ukraine could make it the source of “the biggest refugee crisis this century.”

Isachenkov and Litvinova reported from Moscow; Karmanau from Lviv, Ukraine. Mstyslav Chernov in Mariupol, Ukraine; Sergei Grits in Odesa, Ukraine; Francesca Ebel, Josef Federman and Andrew Drake in Kyiv; Jamey Keaten in Geneva; Lynn Berry, Robert Burns and Eric Tucker in Washington; Edith M. Lederer and Jennifer Peltz at the United Nations; and other AP journalists from around the world contributed to this report.

Trumpism has arrived in Canada