Canada's warm welcome for Ukrainian refugees praised, but questions raised about others 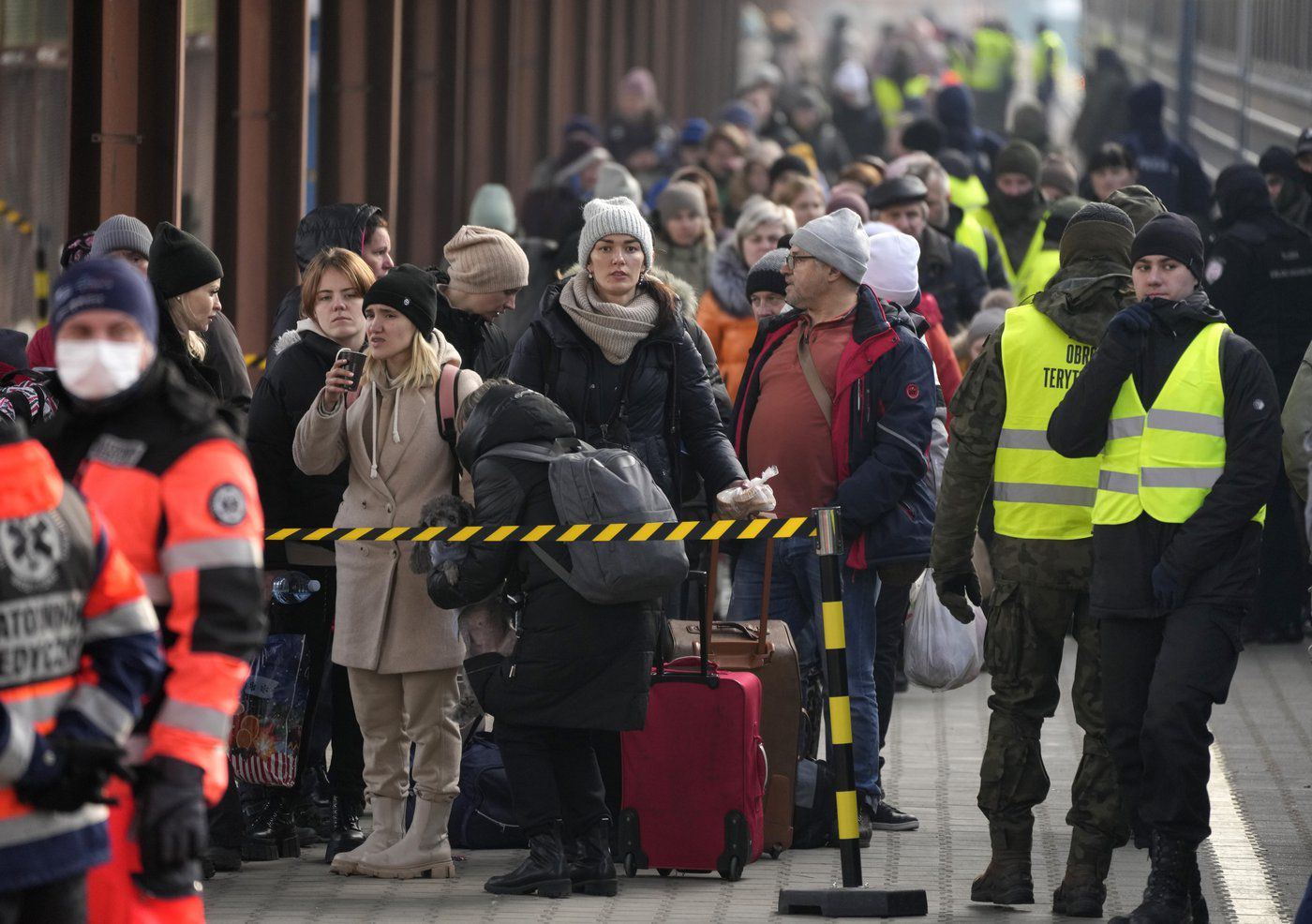 Displaced Ukrainians stand in a line on the train platform after arriving from Ukraine at the station in Przemysl, Poland, on Thursday, March 3, 2022. File photo by The Associated Press/Markus Schreiber
Previous story

Canada's decision to welcome an unlimited number of Ukrainians to Canada on a temporary basis marks a positive and hopefully permanent change to the way the country handles major crises around the world, the Canadian Council for Refugees says.

Immigration Minister Sean Fraser announced Canada would allow Ukrainians to apply for an expedited visa to stay for two years, without conditions like language requirements or labour market impact assessments.

Today, I announced a new program that will cut through red tape and expedite arrivals to offer Ukrainians safe harbour for up to two years. There is no limit on how many can apply.

The move runs contrary to what has traditionally been a fundamental principle of Canada's immigration system, which is not to allow people to come on a temporary basis who may not leave when their visa expires, said Janet Dench, the executive director of the Canadian Council for Refugees.

"In those cases, it is almost impossible to get a temporary visa. So this is showing a quite new way of looking at things," Dench said in an interview Thursday.

She likes the new perspective, she said, and she hopes it sets a precedent for future conflicts.

The question must also be raised, though, about why similar opportunities have not been offered in other circumstances, including the crisis in Afghanistan, Dench said.

Canada has so far welcomed 7,885 Afghan refugees since August 2021, with the goal to bring 40,000 into the country over a two-year period.

By contrast, Canada has already accelerated and approved 6,000 immigration applications from Ukraine since January, when concerns began to rumble about Russian aggression in the region. Many more are expected to come, as the government has put no limit on the number of people who can apply to come on a temporary basis.

Will Tao, a Burnaby, B.C.-based immigration and refugee lawyer, called the discrepancy the elephant in the room.

"It's definitely, at least in recent history and knowledge, unprecedented for them to go this way," Tao said.

Once the dust settles on this crisis, the government will have to unpack whether refugees from other regions like Africa and the Middle East will be afforded the same kind of opportunities in the future, he said.

"These things ultimately could bring some benefit to the system writ large, and hopefully it becomes the norm for situations. However, what is the criteria?"

Dench said the Canadian Council for Refugees has advocated for the government to draft objective criteria that would steer Canada's response to immigration emergencies around the world, free of political or racial bias.

"There have been a lot of crises and emergencies in Africa. And yet, despite that, we haven't seen the same sorts of immigration measures to respond to those as we've seen with other recent crises, such as Syria or Afghanistan, or now Ukraine," she said.

When asked whether such criteria have been considered, Fraser said in a statement that "all policy decisions are made with safeguards in place to protect against bias and to ensure accessibility for those that need it."

Prime Minister Justin Trudeau said the approach to the Ukraine crisis has been informed by Canada's experience with Syrian refugees in 2015.

"We accelerated processes for people to come to Canada quickly, we created new processes that we are drawing on in this particular situation," Trudeau said.

Update: We’re creating a new program for Ukrainians who want to come to Canada temporarily. This will eliminate many of the normal visa requirements – and it’ll be the fastest and safest way to come to Canada.

Each situation is unique and requires specially tailored measures to respond accordingly, he said.

The Syrian refugee crisis involved people who were established for many years in displaced persons camps in Jordan, Lebanon and Turkey, he said.

The Afghan refugee situation in summer 2021 presented all new challenges, he said, as people were trapped inside the country under Taliban rule and unable to get to safe third countries.

In the case of Ukraine, people have fled to the "relative stability of safe neighbouring countries" where Canadian officials can process their applications quickly.

"Every situation is different. But every new situation, we are guided by the same values, the same principles, but adjust to what the needs are on the ground," Trudeau said.

About a million people have fled for their lives from Ukraine to neighbouring countries, unsure when or if they'll be able to return home safely. The United Nations refugee agency warns millions more could be displaced if the conflict continues, sparking Europe's "largest refugee crisis this century."

In his statement, Fraser said a typical resettlement system is designed to respond to protracted situations, where it is clear that there are no durable or long-term solutions for a safe return home.

"This new program is designed specifically for nationals who are not ready to make long term decisions about their future," he said.

Permanently resettling those people who want to come to Canada would be complicated, and take a lot of time and work on the part of the refugees and the government. Offering refugee status could also have consequences for people who hope to return to Ukraine, said Dench.

This solution is simpler, more flexible, offers people the opportunity to work and study and bypasses some of the concerns about managing a large influx of unexpected new permanent residents, she said.

Under the expedited system, the government hopes to process temporary visas within weeks rather than the usual one-year timeline.

"Maybe the government has finally seen that there is no need to stick with these very long-standing principles of not giving out temporary visas," Dench said.

This report by The Canadian Press was first published March 3, 2022.

Well gee, let's see Ukrainians are white and Afghans, people from Yemen, Iraq, Mali, the millions of people living in refugee camps for decades now - are not. It's kind of naive to think the current situation for Ukrainians is going to change anything for those who fleeing war, extreme poverty and the effects of climate change are not white.
The process to bring 40,000 Afghans into the country over the next two years is sorely behind schedule. Am I surprised? No.

So with a temporary visa, can

So with a temporary visa, can they work? Where will they live?