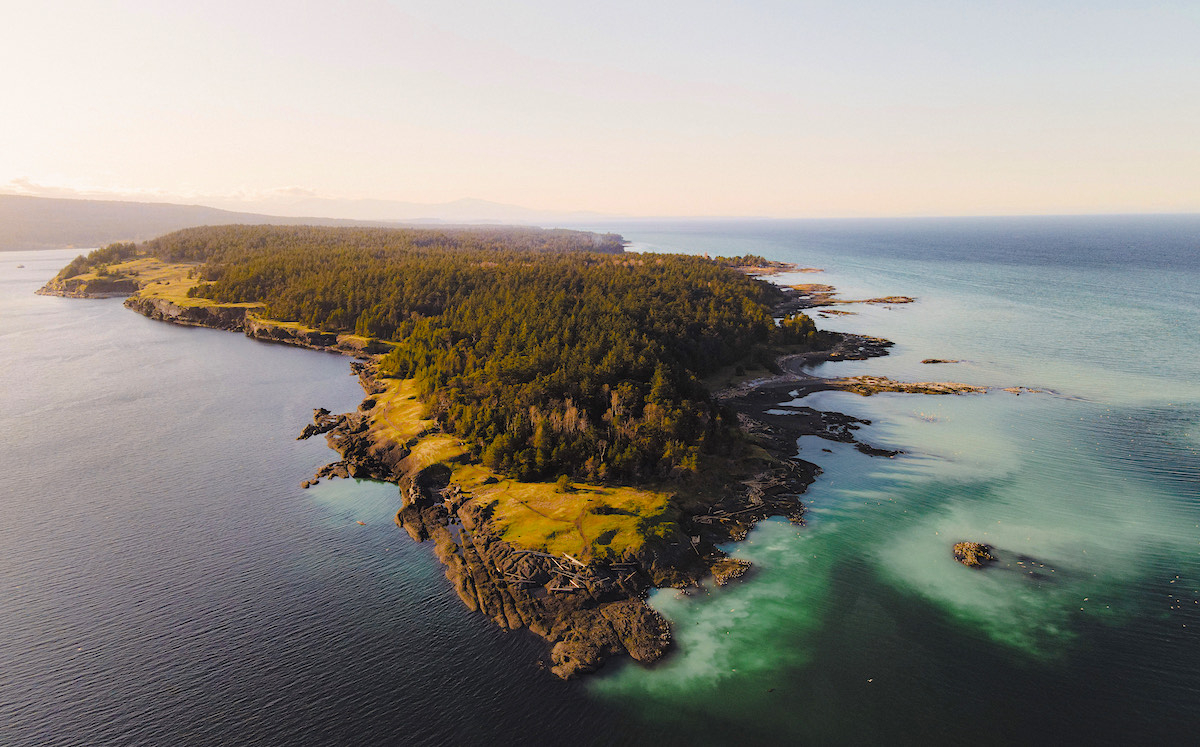 Coastlines in the northern Strait of Georgia are wreathed by the milky emerald green of the annual Pacific herring spawn each spring. Photo by Rebecca Benjamin-Carey, CHI
Previous story
Next story

Ribbons of milky turquoise green water twist and swirl along the coast of the northern Strait of Georgia each year when Pacific herring return to spawn.

A natural wonder that peaks in March, the herring spawn is a herald of spring, eagerly anticipated and celebrated by humans and wildlife alike.

The din echoing off the waters of Hornby and Denman islands, the epicentre of the return, is particularly loud as raucous gulls, seabirds and sea lions cry and bark while feasting on the last abundant herring return along the B.C. coast.

The little silver forage fish has an outsized impact as a keystone species in the marine food web and ecosystem, providing meals for a wide range of seabirds, fish and water mammals such as dolphins and humpback whales, said Grant Scott, president of the Conservancy Hornby Island (CHI).

As such, CHI hosts an annual Herring Fest to highlight the importance of the fish that includes an art exhibit, a “herring school” featuring expert speakers, and boat tours that showcase the wildlife spectacle associated with the spawn.

Scott runs many of the tours himself on his family’s restored former fishing boat — the Sun Corona, a classic salmon troller built in 1968.

Herring Fest is a primarily meant as a celebration of herring, Scott said, but it also highlights concerns many islanders and people have about continuing to operate a commercial fishery in the strait when other formerly abundant fisheries on the Central Coast, west Vancouver Island, Prince Rupert and Haida Gwaii have been closed for years due to overfishing and stocks are still failing to bounce back.

As the Sun Corona makes its way south from Ford Harbour on Hornby, it navigates waters sporting flocks of birds, eagles snatching herring from the water’s surface, and packs of roving steller and California sea lions.

There is also the to-and-fro of commercial and recreational fishing boats as well as kayaks and other tour boats.

Herring is potentially worth more in the water than in a net, Scott said, adding sports fishing and wildlife tourism focus on marine creatures such as chinook salmon and killer whales that rely on healthy stocks and are far more lucrative than the commercial fishing sector that has suffered a steep drop in values per tonne of fish since the 1990s.

Additionally, the roe fishery, which exports primarily to Japan, captures females complete with their egg sacs, cutting the reproductive cycle short for a fish that has the potential to spawn up to eight times, Scott said.

“It’s also terribly wasteful with only 10 per cent of the catch being sold while the remaining 90 per cent is ground up to make food for animals or fish farms,” he said.

Research suggests cumulative effects such as warmer, acidic, less oxygenated ocean water, shifts in the availability of food sources, and wilder weather in tidal zones spurred by climate change may be negatively impacting herring, not to mention the loss of important eelgrass beds and other key habitat due to human development along coastal shores.

Conservation groups won a victory of sorts this year after the federal Ministry of Fisheries and Oceans reduced the commercial herring fishery in the strait by half — allowing a 10 per cent harvest rate, down from 20 per cent last year, and a total allowable catch of 7,850 tonnes.

“We’re pleased with the minister’s decision, but you have to wonder about the wisdom of allowing any kind of commercial fishery when herring aren’t in recovery (across B.C.),” said Scott.

The island conservancy group has been pushing the federal government for a complete moratorium.

But the commercial fishing sector reacted with shock and anger to the new catch limits — given it relies on the herring harvest as one of the few remaining winter fisheries, and is already under immense pressure due to widespread closures in the salmon fishery.

Scott suggests a break from commercial fishing would allow herring to flourish.

“There is potential for a viable fishery if it stops for a while and builds herring back up,” Scott said, adding it would need to be reworked to be community-based food fishery.

The First Nations along the B.C. coast have been sustainably relying on herring for millennia, allowing the herring to spawn, accumulating sticky batches of fertilized eggs on kelp or eelgrass or submerged cedar boughs before harvesting a portion of the roe and fish, he added.

Celebrating a good herring spawn in Hesquiat Harbour - went out and gathered some eelgrass at low tide this morning. pic.twitter.com/aWWBtg65yU

Female herrings lay up to 20,000 eggs and when paired with the milt from male fish, provides a huge burst of spring nutrients along the coastline and a rich bounty for land animals such as bears and wolves, Scott said.

He points to Harlequin ducks, with their blue and rust splashes and white markings, scooting on the ocean surface, noting they arrive a week or so before the herring to pair up and feed on rich food before their summer migration.

“They come here in the thousands, up to 80 per cent of the (coastal winter) population, to feed up before flying east to nesting sites along rapid streams in the Rocky Mountains,” he said.

One of every 10,000 eggs is expected to survive, said Scott, noting that larval herring and juveniles hang out in tidal shallows and the Salish Sea before migrating to the open ocean off the west coast of Vancouver Island two years later with their parents.

But the most observable benefactors of the herring spawn can be heard long before they’re seen.

As the Corona Sun approaches a rocky islet south of Hornby called Norris Rock, the bellow and roar of hundreds of steller sea lions fill the air as they jostle for position and lumber in and out of the water.

Some simply loll about while others argue and push, and juveniles roll and twist with one another in the water. The atmosphere is like a Club Med for sea lions.

A few massive males with shaggy manes the length of a large couch, and likely weighing in excess of 2,000 pounds, repose at various points on the rock, surveying the activity with what appears to be ennui.

The sea lions appear oblivious to and unconcerned with the Sun Corona’s approach and the exclamations of admiration of all those on board.

“They’re very smart,” said Scott. “I back off if they get nervous, but they recognize the boat.”

People on the herring spawn tour include islanders themselves as well as residents from Vancouver Island and folks from Kelowna and Prince George.

But people come from near and far to participate in the boat tours and the Herring Fest, Scott said.

“We even get people from California and England,” he added.

“I think people just want to know more about the environment around them and the importance of this amazing little fish.”