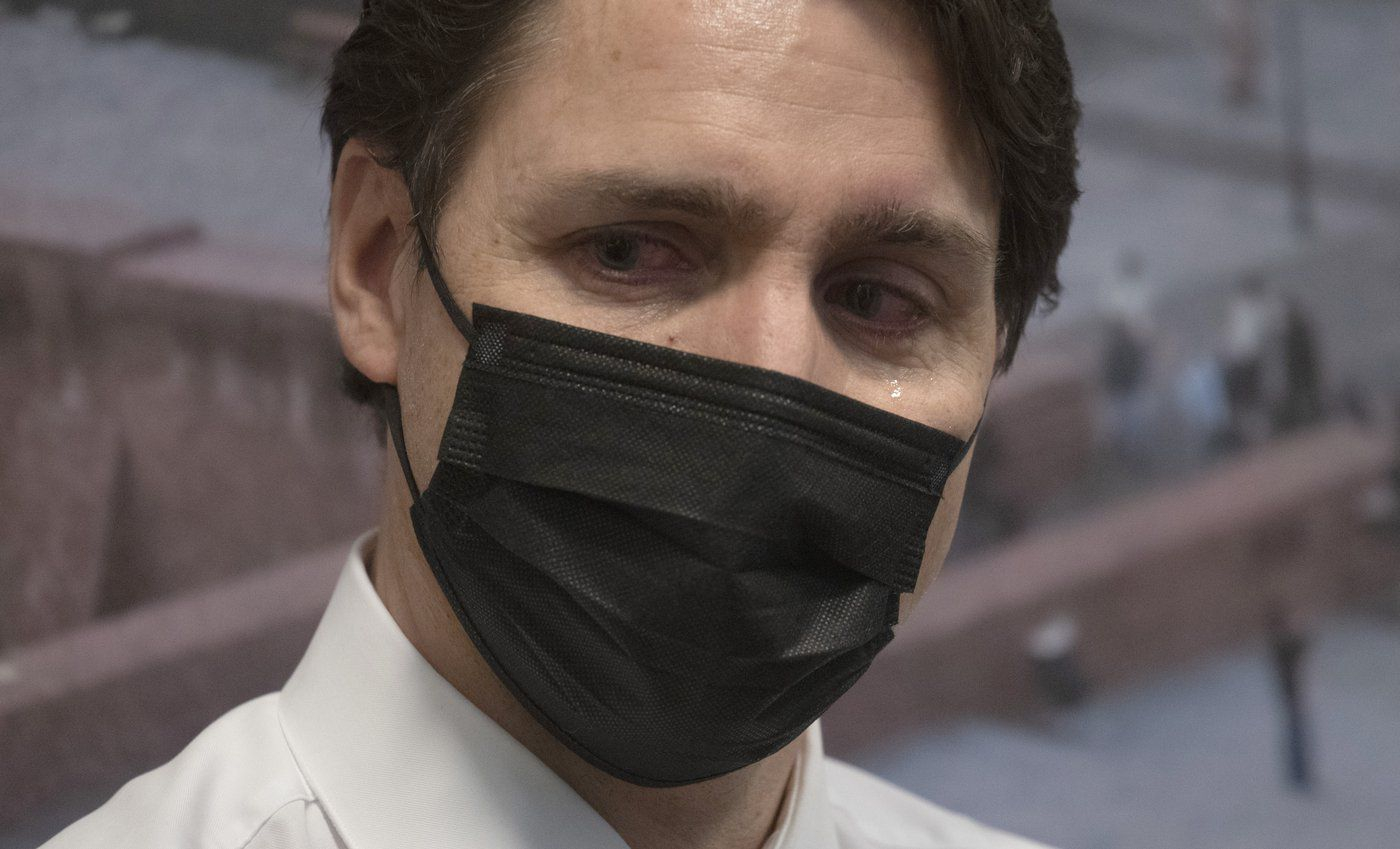 Canadian Prime Minister Justin Trudeau tears up as he listens to a Ukrainian refugee speak during a visit to a refugee centre at a hostel in Warsaw, Poland, on Thursday, March 10, 2022. Photo by The Canadian Press/Adrian Wyld
Previous story

As Kate Kliuchnyk and her mother, Yuliia, pondered the next chapter of their lives in the crisp sunshine outside Warsaw's Central Station on Thursday morning, a brief smile flashed across their faces.

"We really hope that everything will be good, that we will come home," said Kate, 19, who fled her home in Kharkiv, Ukraine's second largest city, with two younger sisters, her mother and Marley, their grey and white husky.

Speaking in lightly accented English, she said it was like being on a "mini trip. Maybe it's a good opportunity to see Europe, to see other countries."

Her mother said it was a good idea to stay positive. "In other way, we'll be very sad. And that won't change nothing."

As the women embarked on a new path in a new land — without Kate's father, who stayed behind — Prime Minister Justin Trudeau visited Poland's leaders and also managed to cross paths with U.S. Vice-President Kamala Harris.

Polish President Andrzej Duda told Trudeau that 100,000 people are fleeing Ukraine into Poland every day, swelling his population by 1.5 million refugees. Many are being housed by local Polish residents, while 500,000 Ukrainian refugees have fled to other nations in Europe as well.

Duda and Trudeau lambasted Russian President Vladimir Putin for an invasion that has unleashed the worst carnage on Europe since the Second World War, killing at least 500 civilians if not more, according to United Nations estimates.

On Wednesday, an airstrike on a maternity hospital in the port city of Mariupol injured pregnant women and left children buried in the rubble.

Duda said Poland will help collect evidence of war crimes so Putin and other Russians can face a legal reckoning before the International Criminal Court.

"This is genocide," he said in Polish.

"If someone bombs maternity hospitals full of pregnant women, if someone shells residential areas where there are no military facilities, these are war crimes and this is genocide."

Trudeau condemned the invasion and was firm in his belief that Putin made a grave mistake when he invaded Ukraine.

"He's going to lose this war because the ferocity and strength and resolve of the Ukrainian people defending their territory is inspiring us all."

It would appear that Yuliia Kliuchnyk's husband may be one of them.

"Men are not allowed to leave the country at the moment," she said.

Kate said she talks by phone with her father every day.

Duda said Canada was the only country that offered help to Poland to manage a refugee crisis before Russia launched its "barbaric, unprovoked" invasion of Ukraine.

He described speaking on the phone with Trudeau on Feb. 13, when he said the prime minister told him if Russia did invade, Canada would support Poland if needed.

As dusk fell on the Polish capital, Trudeau came face to face with the crisis when he spent about half an hour with more than a dozen refugees in a crammed room in a hostel in downtown Warsaw. It was filled with about 15 refugees from five families — all women with the exception of one grey-haired man.

He reached out to clutch a blond toddler after he wandered in front of Trudeau and his entourage of ministers. The officials sat against one wall facing the masked group of refugees, a toy orange cement mixer at their feet.

"I just want to tell you that we are watching what's happening in Ukraine every single day from around the world," Trudeau said.

"And we are all standing with you and we all want this to be over as (soon) as possible. And to get your country back and to support your brave husbands and brothers and friends who are staying back to make sure that Vladimir Putin doesn't win. But you need to know that the West will be there for you as well."

With Deputy Prime Minister Chrystia Freeland serving as his translator, Trudeau listened as some of the refugees relayed their experiences. After listening to one of the women speak, Trudeau was close to tears.

Canadians may soon get to hear directly from Ukrainian President Volodymyr Zelenskyy, who has agreed to address Parliament next Tuesday at 11:15 a.m. eastern time.

"The people of Ukraine have shown tremendous courage in defending their country against the unjustifiable military invasion by Russia's Vladimir Putin," government House leader Mark Holland wrote to House of Commons Speaker Anthony Rota on Thursday as he sought his approval to allow the address to go ahead while the House and Senate are on a two-week break.

"This would be an opportunity for Canadians to hear directly from President Zelenskyy about the urgent and dire situation facing the people of Ukraine."

"We called it the 'God forbid' scenario," Freeland said.

Trudeau also met for an hour on Thursday evening with the American vice-president, who was also in Warsaw, for a discussion about how the two North American neighbours could help their European allies deal with their security and humanitarian needs.

"We stand in solidarity in terms of our outrage," Harris told Trudeau before the meeting. Trudeau in turn praised her and the Biden administration for leading "like-minded countries to prepare for this possibility of the unthinkable, of Russia invading Ukraine."

The United States also raised fears this week that Putin will unleash chemical weapons in the war, which Trudeau and Duda said would be met with the harshest of consequences.

"Putin needs to know that the consequences for his actions already will be severe, and further escalations by him, further targeting of civilians, further use of problematic ways to kill civilians, is going to be met with the severest of responses both globally and individually on him," Trudeau said.

Trudeau said Canada is going to triple the matching fund for Ukrainian relief donations made to the Canadian Red Cross, from $10 million to $30 million.

Canada is expediting refugee applications filed before the war began and prioritizing Ukrainians applying to come to Canada through other streams.

It is also developing an emergency travel stream for Ukrainians that eliminates many of the normal visa requirements and, if they pass a security check, allows people to work or attend school in Canada for at least two years.

Immigration Minister Sean Fraser's office said Thursday the government is on track to launch the new stream March 17. There is no firm date for when a new reunification program for Ukrainians with family in Canada who wish to come and remain here permanently will get off the ground.

Trudeau announced $117 million Thursday to help with those efforts.

Trudeau would not say whether Canada would consider getting rid of the visa altogether during a news conference with Duda on Thursday.

"We will continue to step up and do more on bringing in refugees to Canada as quickly as possible. Our hearts break for the terrible scenes that we've seen, people fleeing for their lives, leaving behind them all their worldly possessions, looking to be safe."

Kate Kliuchnyk said the Ukrainian people need the support of the world.

"I really hope that the war will end and that our country will be supported by other countries. It really matters now," she said.

"We heard about Canada, but it's far away from our home. So we came to Poland, 'cause it's near our country."

This report by The Canadian Press was first published March 10, 2022.

— With files from Laura Osman in Ottawa.