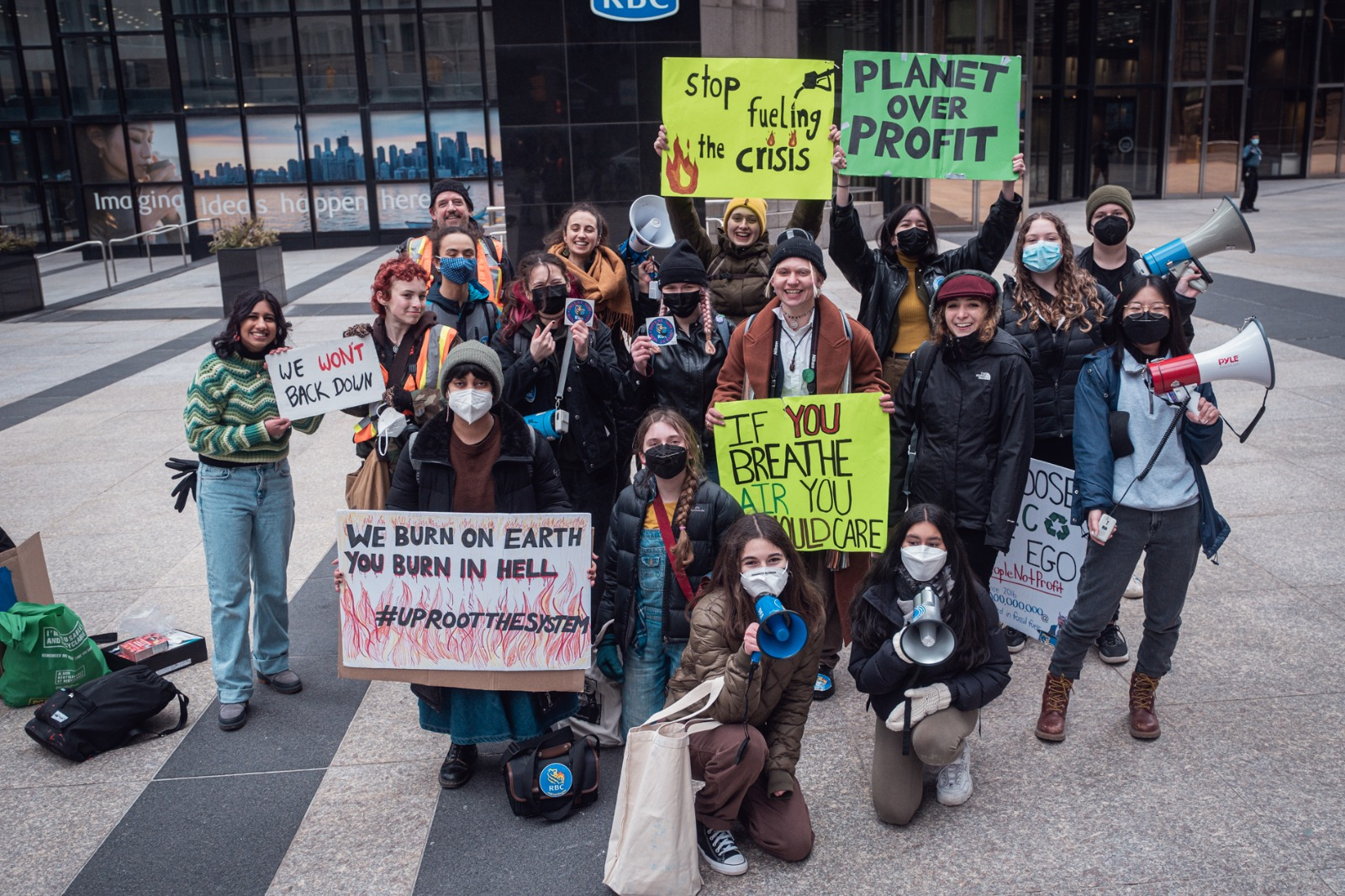 Climate activists pose outside a Royal Bank of Canada building in downtown during a global climate strike on March 25, 2022. Photo by Joshua Best
Previous story
Next story

A hundred or so young people and their allies took to the streets of Toronto’s downtown financial district on Friday to demand the country’s banks immediately divest from fossil fuel projects that exacerbate the climate crisis.

Their numbers were smaller because they kept the details quiet ahead of time, organizers said — rallies just before COVID-19 brought more than 50,000 people out.

“Due to COVID concerns and fears of publicly holding a strike centred around BIPOC (Black, Indigenous and people of colour) impacts of the climate crisis so close to the truck occupation and the hate it exposed, Fridays for Future Toronto chose to only share details for our in-person strike with trusted allies,” said Aliya Hirji, one of the organizers at Fridays For Future Toronto.

Hirji said she has personally experienced a rise in overt racism directed toward her and other racialized friends since a convoy of trucks descended on Ottawa in a weeks-long protest against public health measures that also featured hate symbols and demonstrations of white nationalism.

Friday's protest was part of a co-ordinated global effort to keep pressure on governments and corporations to take more drastic action to deal with climate change, which is causing increasingly frequent and severe weather events around the world.

Hirji said activists have filed a shareholder resolution seeking to stop financing for new fossil fuel projects that is set to be considered at the upcoming annual general meeting of Toronto-Dominion Bank, while another resolution directed at Royal Bank of Canada, the biggest of Canada’s fossil fuel backers, was rejected on a technicality.

“Climate action is not an option, yet within only the last six years, RBC has poured hundreds of billions of dollars into fossil fuels and related projects,” says Ryann Fineberg, another organizer. “This is destroying traditional Indigenous lands, it’s destroying historically marginalized communities and it’s destroying our futures as youth.”

The youth say they want RBC to pull funding from projects that do not have the free, prior and informed consent from Indigenous nations, including the Coastal GasLink project opposed by hereditary leaders of the Wet’suwet’en First Nation, whose traditional territory it plans to traverse. They want an immediate end to funding coal and new fossil fuel expansion as well.

The young climate activists behind Toronto’s action against fossil fuel financing kept their plans close to their chests this week.

As COVID cases rise, some activists fearful of climate talks

By Danica Kirka | News, Politics | October 30th 2021
Reports from the Race to a Safer World