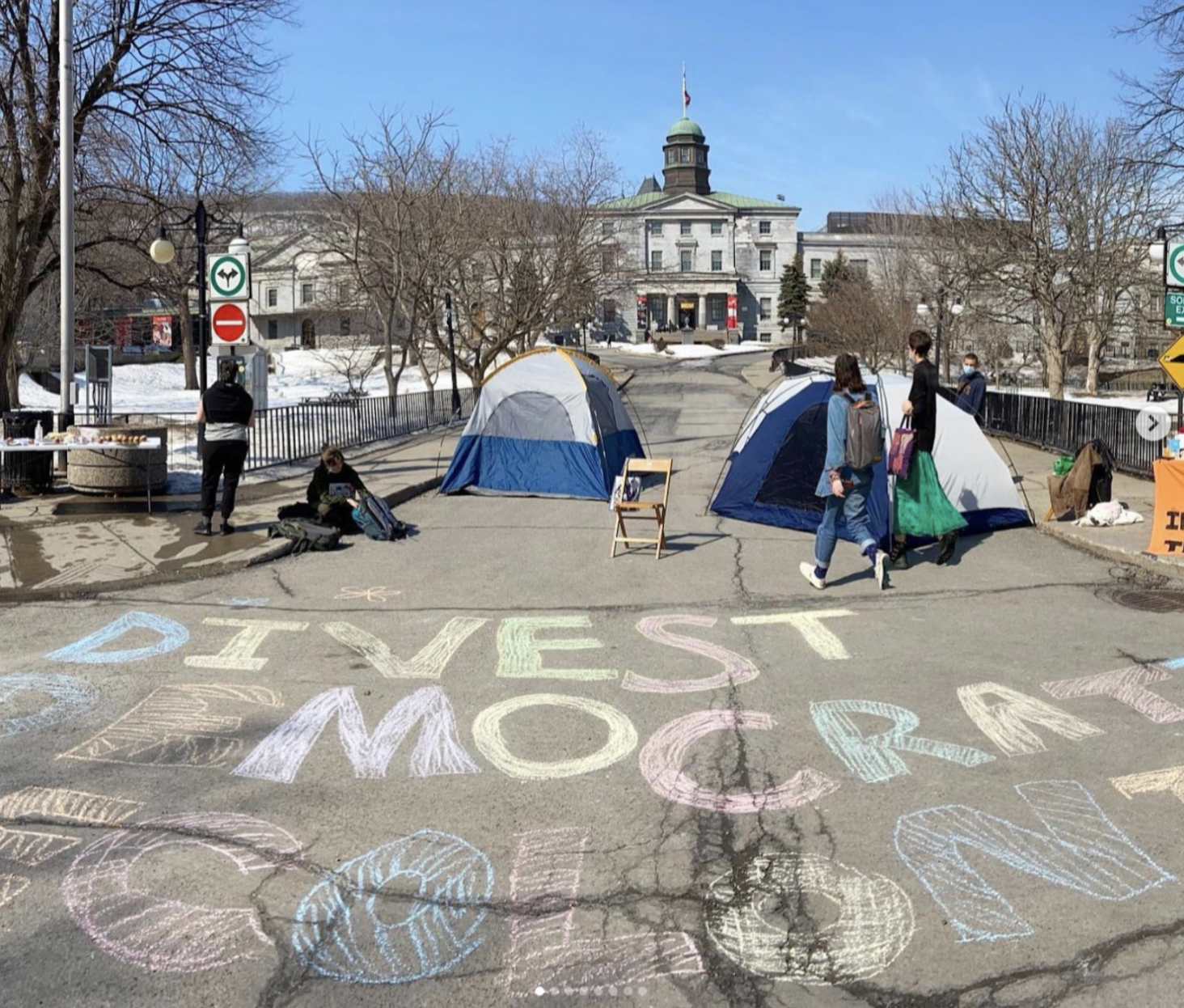 Students pushing for divestment set up tents on the campus of McGill University. Photo courtesy of Divest McGill
Previous story

Students with a youth divestment group at McGill University are staging an unusual protest. They are using an "occupation" to draw extra attention to the school's pension fund investments in fossil fuels, which are blamed for accelerating the climate crisis. Increasingly, climate activists are demanding people have a right to clean air.

Divest McGill's sit-in tactics, which began on March 7, are similar to the strategies of groups in the peace and civil rights movements whose protests received wide play on television.

Using Instagram as its medium of choice, Divest McGill members took over the Arts Building as part of their #OccupyMcGill plan. They relied on the community for support, using social media to spread their message and strategically calling out for supplies, planning meals for occupiers and ensuring they make an impact.

On Day 11 of the occupation, the group “took to the streets,” according to its Instagram, setting up in the centre of campus playing music, creating art and inviting the rest of the McGill community to the occupation.

Day 12 was the longest occupation at the university to date, according to Divest McGill’s Twitter.

In its coverage The McGill Daily noted on March 11, four days into the protest, occupiers reported being “tormented with an extruciating [sic], high-pitch [sic], loud siren noise” coming from loudspeakers in the Arts Building lobby, though the school administration says these were triggered by mistake.

Canada’s National Observer requested an interview with the university. Instead, a spokesperson issued a statement that read in part: “Sustainability is an institutional priority at McGill as evidenced by the ambitious goals we have set out for ourselves. We have shown leadership in sustainability and climate activities relating to operations, governance and administration, and research and education.”

The year that was

Students with a youth divestment group at McGill University are staging an unusual protest. They are using an "occupation" to draw extra attention to the school's pension fund investments in fossil fuels.

Student fossil fuel divestment groups had a busy 2021, and have already seen some wins in 2022.

The University of Ottawa has pledged to divest from fossil fuels by 2023 and end all indirect holdings by 2030, a major win for the student advocacy group Fossil Free UOttawa, which has been advocating for divestment for years and petitioning since 2014.

Petra Mary Duff, a mathematical physics student and member of Fossil Free UWaterloo, says the group had been focusing on forcing the University of Waterloo to divest and commit to carbon-neutral investing practices by organizing demonstrations, protests, marches as well as working on education by presenting classes, putting up tables on campus and other events.

“All of that together, culminated in … [in] June 2021 [with] the university finally committing to both divestment by 2025 and 100 per cent carbon neutrality by 2040,” says Duff. “I'm so very excited [and] very happy that our work paid off.”

But their fight doesn’t end here.

“We've been regrouping and figuring out our direction from here,” says Duff.

Petra Mary Duff on how Fossil Free UWaterloo is taking a broader perspective on climate justice following a win to get its university to pledge divestment.

The University of Toronto also announced last fall that it would end its investments in the fossil fuel industry, becoming one of 10 universities to commit to divestment.

Still more work to do

Not all student advocacy groups, however, have seen such promises from their universities.

The group has been trying to recruit well-known university alumni to support the divestment push by withdrawing or halting donations until the university acts. Bhuiyan says they have contacted scientist Donna Strickland, Canada’s first female astronaut in space Roberta Bonder, Twitch streamer Pokimane, and others.

“If we are able to craft a strong legal argument and a law firm verifies it, we would submit a formal complaint to the public guardian [of the endowment].”

“This team will investigate McMaster's ... investments in fossil fuels, bring to light their various actions in communities all around the world, and then show McMaster's statements on sustainable development goals and how their investments line up,” he says.

“Next, it will also investigate so-called green investments and investment strategies, highlight the greenwashing occurring and also provide alternative investments.”

In a prepared statement to Canada's National Observer, a McMaster spokesperson said, “We appreciate and acknowledge [McMaster Divest] and their focus on sustainability. As well, we encourage students to be engaged and support those who may wish to participate. McMaster is committed to being carbon-neutral. We’ve reduced intensity by 51 per cent since 2018 and are aiming to reduce carbon emissions by 65 per cent by 2025 and by 75 per cent by 2030. This is the most comprehensive carbon reduction strategy across Canadian post-secondary institutions. We aim to be net-zero as soon as possible after that time frame.”

McGill Divest is also taking it to the banks

McGill Divest has also been working on getting not only the university to divest, but also putting pressure on banks to dump fossil fuel holdings.

“We've held some actions targeting like TD Bank and RBC, being that they're huge funders of fossil fuel projects,” says Divest McGill member Zahur Ashrafuzzaman. “There are very heavy colonialism impacts besides the obvious environmental ones.”

McMaster Divest expressed “solidarity,” on Divest McGill’s Instagram post and appears to be following suit with its divestment initiatives.

McMaster Divest held a climate strike on Friday, occupying the university's hall with signs, encouraging occupants to bring friends and use recyclable materials for the protest.

Fossil Free Waterloo also took part in a climate strike on Friday. As part of the Global Climate Strike, youth from Waterloo staged an in-person action calling on RBC to stop funding fossil fuels, calling on both their school and banks to divest.

“There have excitingly been new open occupations of university buildings popping up at different universities ... it's been a priority ... to mobilize and act in solidarity with other groups on campus who also believe democratizing the university to be an urgent issue.”

He says Divest McGill will eventually "rest, debrief, care for one another, and then determine our next actions."

Keep it up students! That's

Keep it up students! That's what happened in the 1960s. And it works!