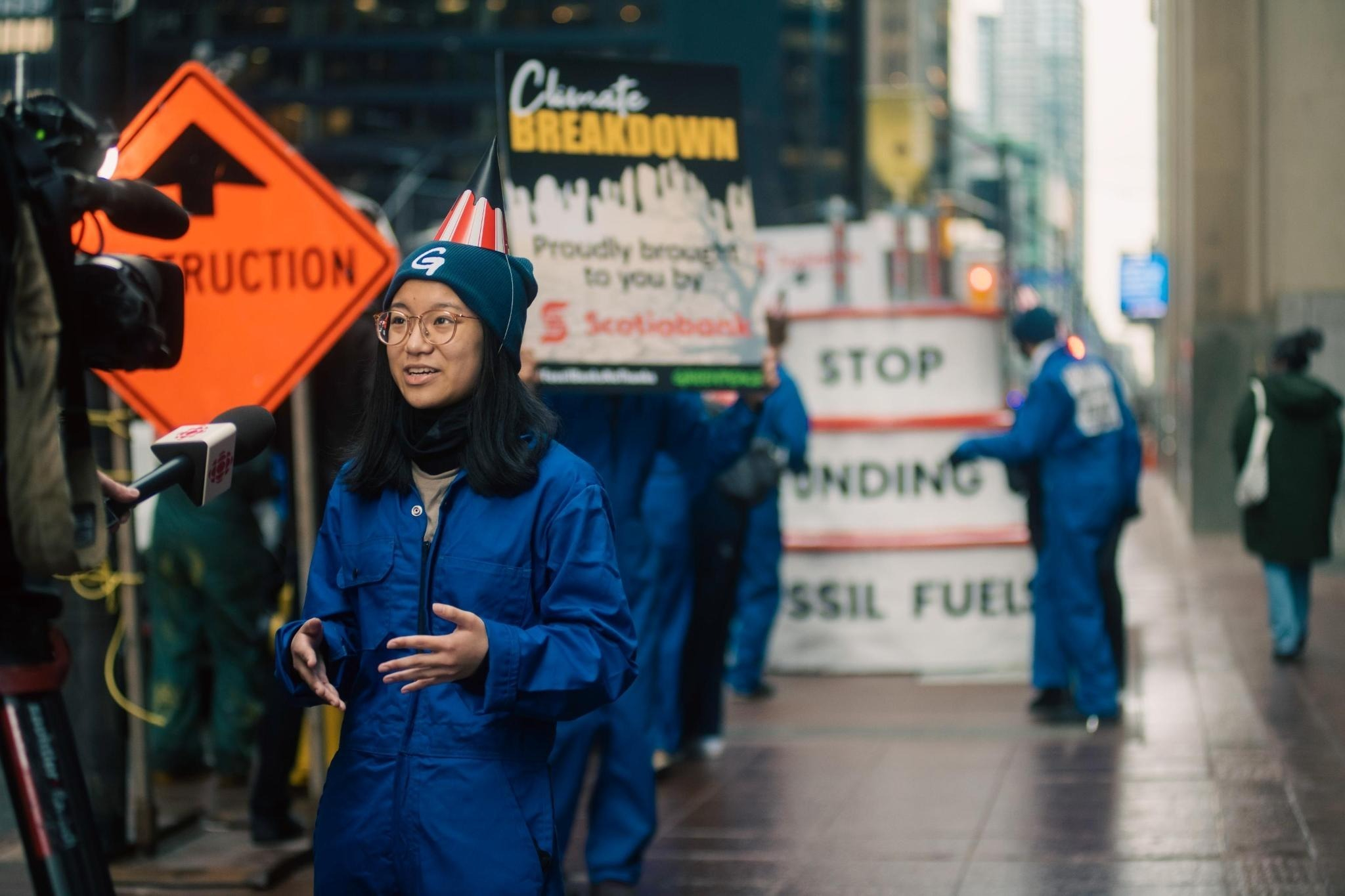 A small but loud party scene welcomed shareholders who showed up in person for Scotiabank’s 190th annual general meeting in Toronto’s financial district on Tuesday.

Activists from Greenpeace sought to disrupt the meeting of Canada’s second-largest funder of fossil fuel projects while also striking a lighthearted tone at the start of a week of financial institution gatherings, including the AGM for the sector's top backer, Royal Bank of Canada.

“It can be kind of scary to be faced with the climate crisis, so doing something a little more lighthearted, a little more fun” helps offset the climate anxiety that can lead to people feeling paralyzed, said climate activist Chloe Tse, a 20-year-old studying neuroscience and health studies at the University of Toronto.

A van equipped with a powerful sound system parked outside Scotiabank’s 40 King St. West office early in the day, with a handful of activists dressed in jumpsuits and party hats dancing in front of an oversized wooden birthday cake as security guards looked on.

On the agenda inside were two climate-related shareholder proposals — an annual vote on the bank's climate action targets and plan, and that a climate change committee be struck. The resolutions were rejected by investors although number two (to "establish an annual advisory vote policy regarding its environmental and climate change targets and action plan") did manage to garner 20 per cent.

Greenpeace campaigner Tara Seucharan said they and other environmental groups often put a spotlight on RBC as the largest backer of fossil fuel projects and they thought they’d “share the love” with Scotiabank, Canada’s second-largest oil and gas bank.

“Clearly what they’re saying and what they’re doing is not aligned,” Seucharan said of efforts by Scotiabank and other financial institutions to highlight their green credentials while still backing new projects incompatible with staving off climate catastrophe.

She said people often have a close relationship with their bank that can be passed down over generations and might not connect them with the pipelines and other projects they regularly finance, in part with the collected savings of Canadians.

The shareholders who show up in person to such events got an early morning dose of dancefloor bass from Greenpeace climate protesters outside Scotiabank’s annual general meeting on Tuesday. #FossilFuels

“Tell them: ‘I don’t want you using my money to fund fossil fuels,’” she said. “Right now, if you have investments, none of them have any sort of investment option where your money isn’t going to fossil fuel investment.”

Seucharan said those who feel strongly enough are opting to switch to credit unions, but they’re asking consumers to “use your power as a client” to apply pressure for change.

A swift move away from fossil fuels and increased investments in renewables is needed to avoid the worst impacts of the climate crisis, the latest report from the Intergovernmental Panel on Climate Change says, increasing the focus on financial backers of legacy energy as climate culprits.