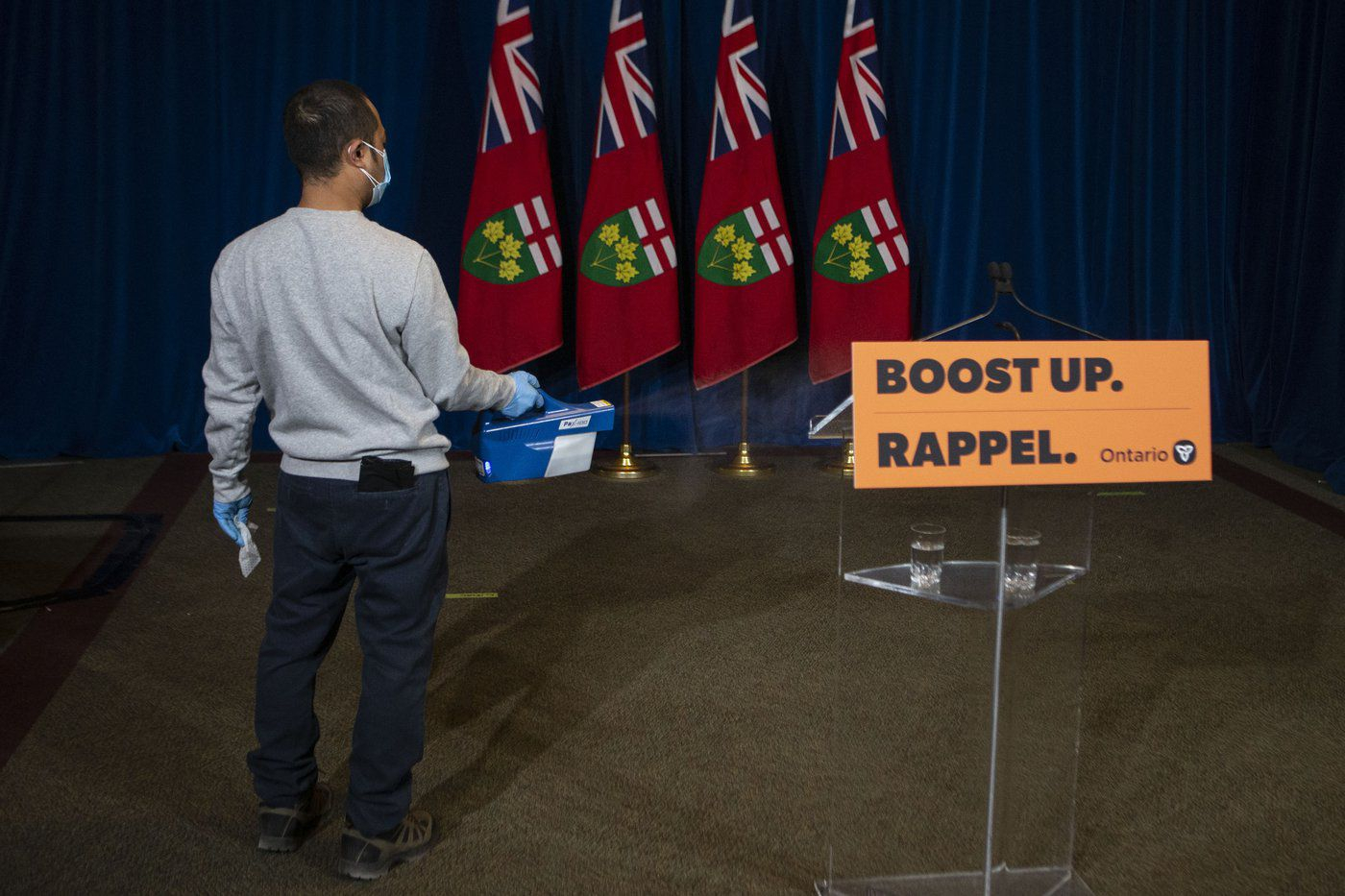 The room which hosted the news conference held by Ontario Premier Doug Ford at the Queen's Park Legislature in Toronto is disinfected on Monday, Jan. 3, 2022. File photo by The Canadian Press/Chris Young
Previous story

Christine Enns said she was shocked when a rapid test showed she had tested positive for COVID-19.

Enns, who received two doses of COVID-19 vaccine and a booster shot, already had the virus in early February and thought reinfection was rare.

"I started feeling sick three to four days ago thinking, 'This feels like COVID.' I took five tests and ... today it came back positive," the bakery owner said Friday from her home in Warren, Mba., about 45 kilometres north of Winnipeg.

"It did come as a surprise to me because of all the things I put in place to not get it. Now that I had it twice, I don't feel quite as invincible."

Reinfection of COVID-19 was considered unusual, but then the Omicron variant arrived.

He said public health data suggests up to 10 per cent of infected Canadians who have recently had BA.2 — a sub-variant of Omicron — previously had BA.1 or a previous infection, like the Delta variant.

This aligns with recent studies done in England that suggest 10 per cent of reported cases are reinfections.

"That shows just because you got Omicron once doesn't mean you're bulletproof now," Shahab said.

Not all provinces publicly report reinfection rates. However, in Ontario, public health says nearly 12,000 people have gotten COVID-19 twice since November 2020 with the current risk of reinfection deemed "high."

Quebec's National Institute of Public Health says the number of presumed reinfections has increased greatly in its province since Omicron arrived.

In a January report, Quebec reported 32 reinfections for every 1,000 primary infections, with nearly 9,000 people suspected of getting reinfected since May of 2020.

Nazeem Muhajarine, an epidemiologist at the University of Saskatchewan, said unlike other variants Omicron is much better at working around immunity that's either induced by vaccines or previous infections.

"Not only is it able to escape immunity, but it is happening at a time where people's immunity is waning," Muhajarine said, adding it has been three to five months since most Canadians have completed their two-dose vaccine series.

"It's a bit of a double jeopardy there, and that's why we're seeing so many more reinfections with Omicron."

Health officials continue to suggest that people complete their two-dose COVID-19 vaccine series and get boosted with a third dose and, if eligible, a fourth shot.

"Even though you got COVID at some point in the past, you can wait anywhere from two weeks to three months to get a booster."

Nationwide, about 47 per cent of eligible people have received a third dose, says the Public Health Agency of Canada.

Despite getting COVID-19 twice, Enns said she will get a second booster if she becomes eligible.

"I feel if I didn't have the vaccinations, I'd definitely be in the hospital," said Enns, who is considered at-risk because she has Type 2 diabetes and asthma.

Enns recalled knowing an unvaccinated person who died alone in hospital due to COVID-19, calling the experience "awful."

This report by The Canadian Press was first published April 11, 2022.

Which variant are current

Which variant are current vaccines designed for? I have not seen this information even discussed even though at least a year ago development for different variants was under way.

AFAIK, only the original

AFAIK, only the original strain has been used for vaccines.
That's likely why they're less and less effective with each new evolution of the virus.