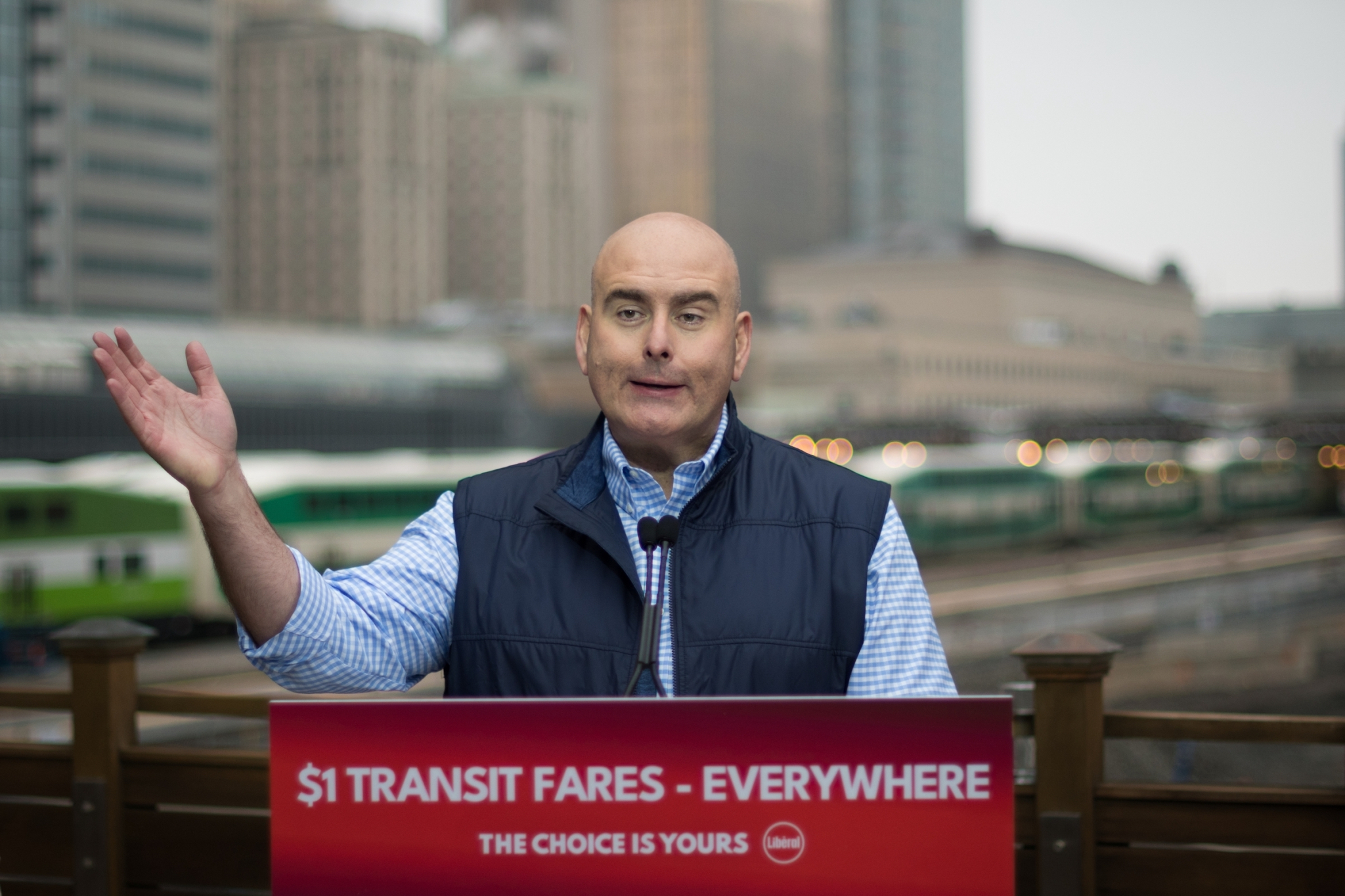 Steven Del Duca, leader of Ontario's Liberal Party, announces the party will reduce transit fares to $1 per ride for the next 18 months if elected. THE CANADIAN PRESS/ Tijana Martin
Previous story

In an echo of Premier Doug Ford’s (unfulfilled) “buck-a-beer” election promise four years ago, the Ontario Liberals are promising a buck-a-ride.

Leader Steven Del Duca, who was transport minister in the previous Liberal government, said Monday his government would cut transit fares to $1 until January 2024. Monthly passes would be $40 and veterans would ride free.

The loonie fare would apply to all transit, including municipal systems, GO Transit and Ontario Northland, with the province making up lost revenues, estimated to cost about $710 million in the next fiscal year and $1.1 billion in 2023-24. A Liberal government would invest another $375 million annually for transit operations to expand routes, hours, intercity connections and accessibility, he said.

By contrast, the Ford government’s recent scrapping of licence plate sticker renewal fees is estimated to cost Ontario about $1.1 billion.

The Liberals said the fare drop would take 400,000 vehicles off the road, reduce greenhouse gas emissions and increase ridership that hasn’t rebounded from a precipitous drop during the ongoing COVID-19 pandemic.

“Ontario is gripped by an affordability crisis and families expect their government to act,” said Del Duca in a statement. “Our plan will provide families with immediate relief within the first 100 days of being elected.”

The Liberals have yet to release their platform leading into the June 2 election, but Del Duca said it would be coming soon. The election campaign officially starts Wednesday, though party leaders have been ramping up their promises in the past weeks. The Progressive Conservative government, particularly, has spent the last several months touring the province with a slew of campaign-style announcements.

The Liberal statement took a dig at Ford’s plans to build Highway 413, a controversial project that would pave over protected Greenbelt lands north of Toronto. The government has not put a price tag on the project, though it’s expected to be tens of billions. “With the Ford Conservatives, Ontario gets billions wasted on one highway that won’t be completed for a decade and will not make a difference on commute times,” it said.

Del Duca, along with the NDP and the Green Party, has vowed to cancel Highway 413, though he hasn’t gone so far for the Bradford Bypass, another contentious highway project through the Greenbelt championed by the Ford government.

In an echo of Premier Doug Ford’s (unfulfilled) “buck-a-beer” election promise four years ago, the Ontario Liberals are promising a buck-a-ride. #ONpoli

The NDP, which formed the official Opposition in 2018 when the Liberals were thoroughly trounced after 15 years in power, blasted Del Duca’s record as transport minister. “Under the Liberals … transit got worse and worse,” said the party’s Essex MPP, Taras Natyshak, in a statement, pointing to a decision to build the Kirby GO station in Del Duca’s riding despite reports suggesting it would have negative impacts.

“On transit, you can’t trust the Liberals to fix what they helped break.”

Ontario Green Party Leader Mike Schreiner said in a statement he was happy to see other parties “follow our lead,” noting the Greens were the first party to announce plans for transit fare reductions.