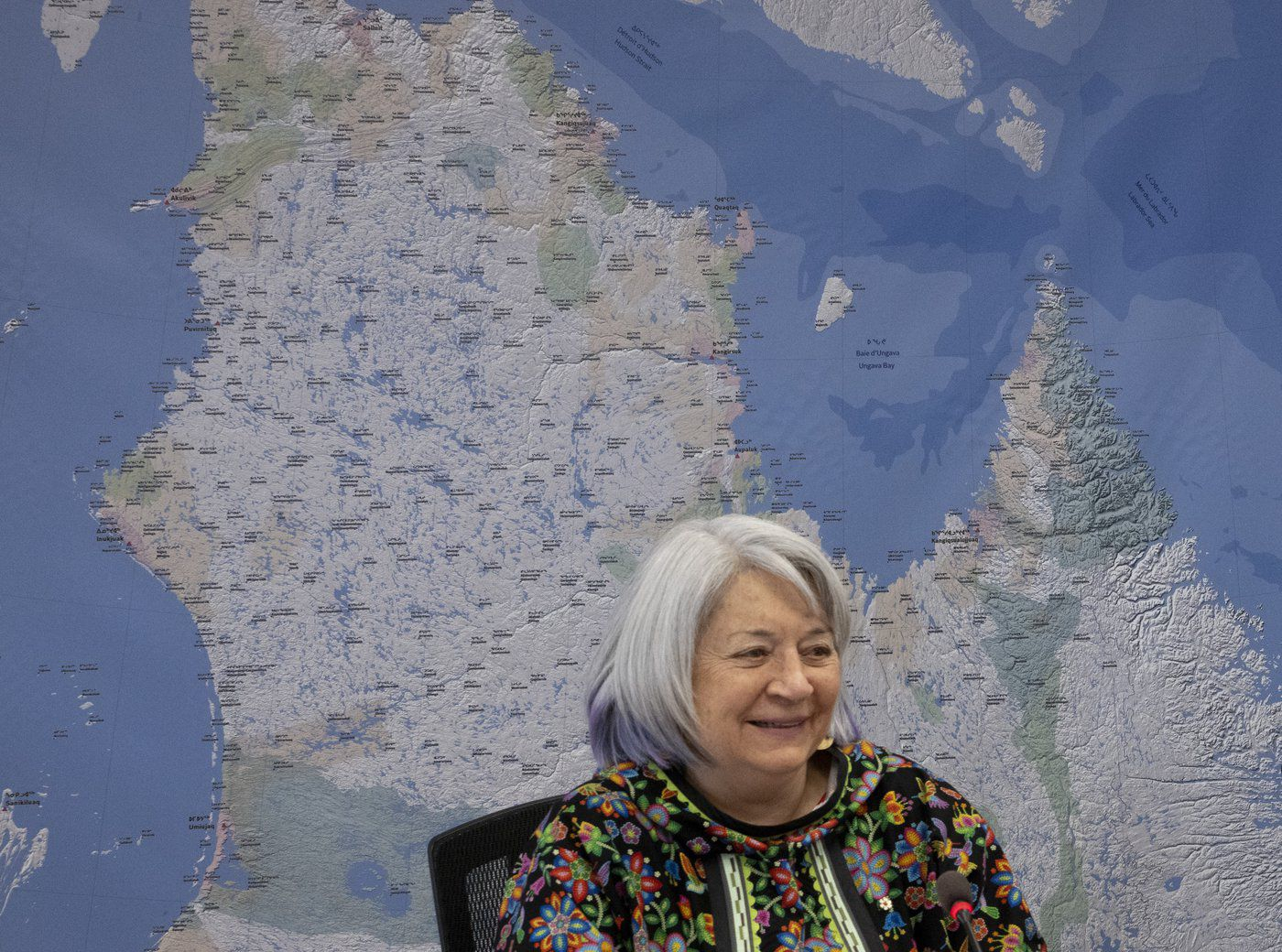 Mary Simon faced some tough questions in three languages Monday from students at the Jaanimmarik School in Kuujjuaq, a community in northern Quebec.

They asked about her favourite memories growing up in Nunavik (fishing, hunting and being on the land with her family), what she had to do to become Governor General (work hard), and what made her accept the position as the Queen's representative in Canada.

To that, Simon said she hopes to use the non-political office to encourage Canadians to work together.

"We call it reconciliation right now," she said. "Because there needs to be a lot more work done between Indigenous people and other Canadians."

She said equality in education is part of that work.

The elementary-to-secondary school has about 350 students and classes are offered in English, French and Inuktitut.

"I used to go to school right next to this big school. We had a one-classroom school next door," Simon told the children.

She and her siblings went to federal day school in Kuujjuaq, then called Fort Chimo. She was home-schooled by her father after Grade 6.

Simon was born near Kangiqsualujjuaq, an Inuit village in Nunavik, in 1947. Her mother Nancy May, whose family surname was Angnatuk-Askew, was Inuk and her father, Bob Mardon May, had moved to the Arctic to work for the Hudson's Bay Co. and stayed.

Simon only spoke Inuktitut as a child and had to learn English when she got to school.

Her appointment as Governor General in July 2021 sparked anger among some francophones, because she isn't fluent in French. More than 1,000 complaints were sent to the official languages watchdog, who launched an investigation.

Simon has said she didn't have an opportunity to learn French growing up in Nunavik, and has committed to learning while on the job. Quebec Premier François Legault told media after meeting Simon last week that she still has work to do.

Simon made self-deprecating comments about her French proficiency several times on Monday, during the town hall session at the school and earlier in the day at a meeting with Inuit leaders.

"I tried my best to speak French, I'm still not quite there yet, but he did say to the media that I need to improve my French," she said with a chuckle.

Makivik president Pita Aatami, the president of Makivik Corp., which represents Inuit in northern Quebec, said Monday that Simon's appointment has given exposure to the region and to Inuit that they never would have received.

But he also noted that negotiations with the Quebec government have nonetheless stalled.

"At this time, there's really no movement," Aatami said.

"Canada is on board and things are happening, but Quebec has talked about bringing an observer for the self-determination process … I said we don't need an observer, we need a negotiator that's going to work with us."

Simon told the group Legault is "on record" saying he will appoint a negotiator.

Simon was a lead negotiator on the James Bay and Northern Quebec Agreement.

Regarded as Canada's first modern treaty, the 1975 deal affirmed Inuit and Cree hunting and trapping rights in Nunavik and established $225 million in compensation over 20 years in exchange for construction of hydroelectric dams.

The deal also created the Kativik Ilisarniliriniq (school board), which oversees elementary, high school and adult education in 14 communities in Nunavik, including Kuujjuaq.

The board's teaching language is Inuktitut. It opened up a French-language stream so students who move onto post-secondary school can continue their studies in a French school, college or university elsewhere in Quebec.

"Being Inuk and being able to speak my language is really important," she said.

"Even if you're doing great things at the national level or international level, you will always be able to come back home and speak your language."

Simon describes herself as someone who rarely gets excited, but this week is different.

"I was thinking of my early childhood, when I was a young teenager especially, after we were at the camp on the George River. We would be coming here and we would be so excited we were almost squealing," she said Monday morning.

She's not alone. People in Kuujjuaq have been anxiously awaiting her arrival for days, including her childhood best friend and sister-in-law, Louisa Berthe May.

“I was like, I wonder if I’ll be able to hug her,” May said. “So she came and hugged me, and wow, that was something.”

Simon spent time with the excited crowd gathered outside Kuujjuaq Town Hall on an unusually warm spring day. Several people called out “Welcome home, Mary,” a far cry from the usual formalities of the viceregal office.

Here in Nunavik, the woman holding Canada’s highest office is known by her first name. Everyone seems to know her, and many call her a friend.

Local Inuit leaders laughed that there's no Inuktitut translation for her title "Your Excellency."

“Mary’s been advocating for Inuit people our entire lives, so for her to have that moment to become Her Excellency, Governor General of Canada, was well deserved. And it means a lot for Inuit people across the Arctic.”

This report by The Canadian Press was first published May 9, 2022.

— With files from Brittany Hobson in Winnipeg