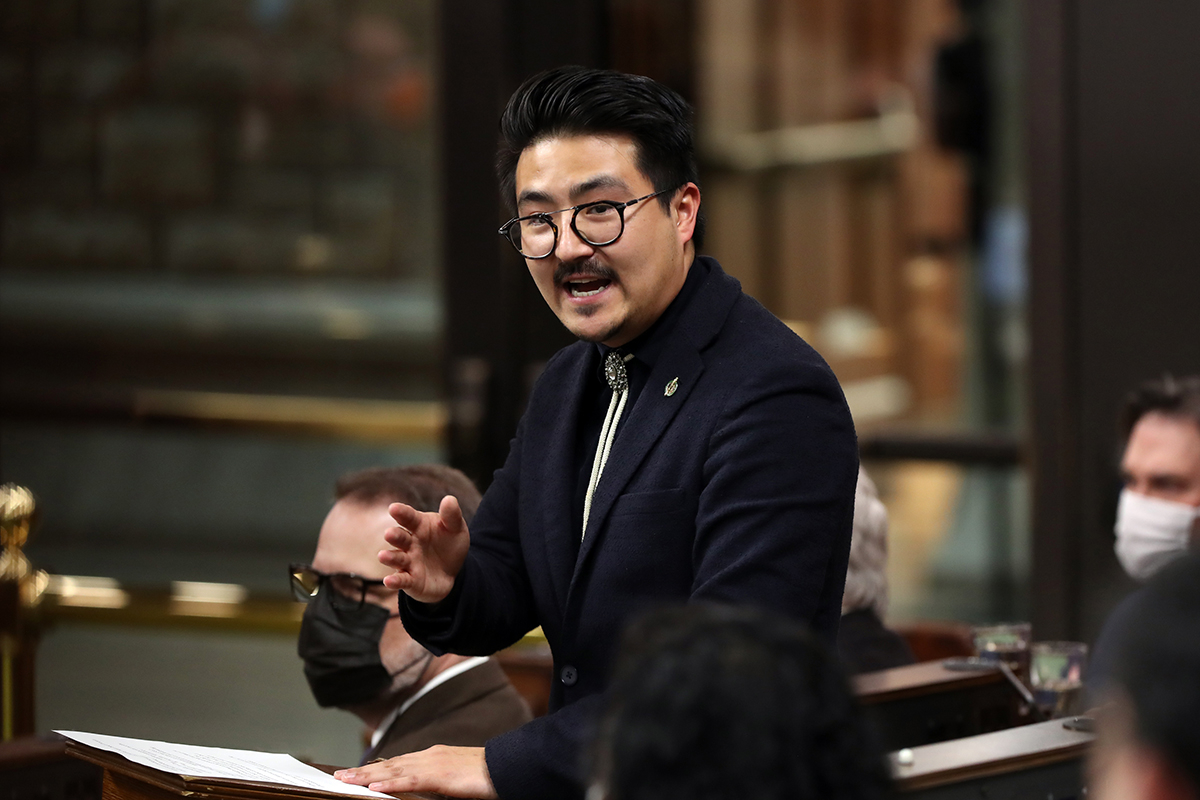 NDP MP Blake Desjarlais challenged a representative of the Canadian Association of Petroleum Producers on whether companies will cough up an estimated $253 million in unpaid property taxes. Photo by Christian Diotte / © Library of Parliament
Previous story

Earlier this week, Edmonton-Griesbach’s MP demanded answers from an oil and gas industry representative on whether companies intend to cough up an estimated $253 million owed to rural communities in Alberta.

The NDP MP, Blake Desjarlais, went on the offensive during a natural resources committee study on creating a fair and equitable energy transition for Canadians.

At the end of 2021, oil and gas companies owed small municipalities approximately $253 million in unpaid property taxes according to a member survey done by the Rural Municipalities of Alberta.

The affected communities are predominantly Indigenous and need the money to pay for roads, water and other basic services, Desjarlais told the committee. The Fishing Lake Métis Settlement in Alberta is one of the many communities still asking oil and gas companies to pay their taxes, said Desjarlais, who is originally from there.

“But these companies are putting that debt, that unpaid tax burden, on regular everyday people,” he said. “It's killing communities.”

Both Desjarlais and his father were energy workers, he told the committee.

“My father died on an energy site and you know what [the company] said? ‘Take a hike,’” said Desjarlais, adding that is still the situation for workers today.

“And they're asking for partnership with the government? Since when do we partner with criminals?”

Big oil loves to ask Canadians to write them blank cheques while they rake in record profits.

Their shareholders make off with billions while they leave struggling rural Alberta communities and workers with $253 million in unpaid taxes.

Property taxes are “a matter of survival” for many rural municipalities because critical infrastructure like roads relies almost entirely on that revenue, according to Rural Municipalities of Alberta. It says a lack of enforcement by the Alberta government is to blame. A popular argument made by government and industry alike is that paying property taxes would lead to insolvency for companies and result in lost jobs, it noted.

@DesjarlaisBlake wants to know whether members of @OilGasCanada will ever pay the estimated $253 million in unpaid property taxes they owe to rural municipalities in Alberta. #cdnpoli #OilAndGas #CAPP

“It's absolutely unfair to the men and the women who work in these communities and their families to be shackled to companies that don't want to pay their fair share, pay for their communities, pay for the basic programs and benefits that every worker deserves,” Desjarlais declared.

His question for the Canadian Association of Petroleum Producers’ (CAPP) witness, Shannon Joseph, was simple: Will CAPP’s members pay the taxes owed to rural communities?

“Our members pay taxes and there have been issues,” Joseph began in response before Desjarlais interjected “to correct the record” to reflect that “they are not paying their taxes.”

When pressed further, Joseph responded that the provinces, companies and municipalities are in discussion about what constitutes a “fair share” but would not be clear on whether the $253 million would ever be paid, declining to comment further.

In her opening remarks, Joseph had indicated CAPP is ready to partner with the federal government to create “a fair and equitable energy transformation.”

“They're asking for partnership when they can't even pay the measly $253 million,” said Desjarlais.

“We can't even get a clear answer if they're going to pay their taxes. How is that equitable?”

Would that oil & gas were the

Would that oil & gas were the only indjstry unwilling to pa their taxes. Pretty mch every corporate entity in Cnada spends more on evading tax payment that is actually forking over the dough they owe. It is a matter of "principle" to them. If they pay taxes on their profits it wipes out their begging strategy that defends NOT paying taxes a their "Patriotic" contribution to the Canadian economy/ supporting the workers they so ruthlessly exploit. Just who do they think they are fooling? all the legislators who cringe at their demands... It is the ancient imperial/colonial shuffle extortion racket! Capitalism at its most depraved!