Movies: Colin Firth in wartime, a French student and the abortion law and Cinderella's most alternate version ever 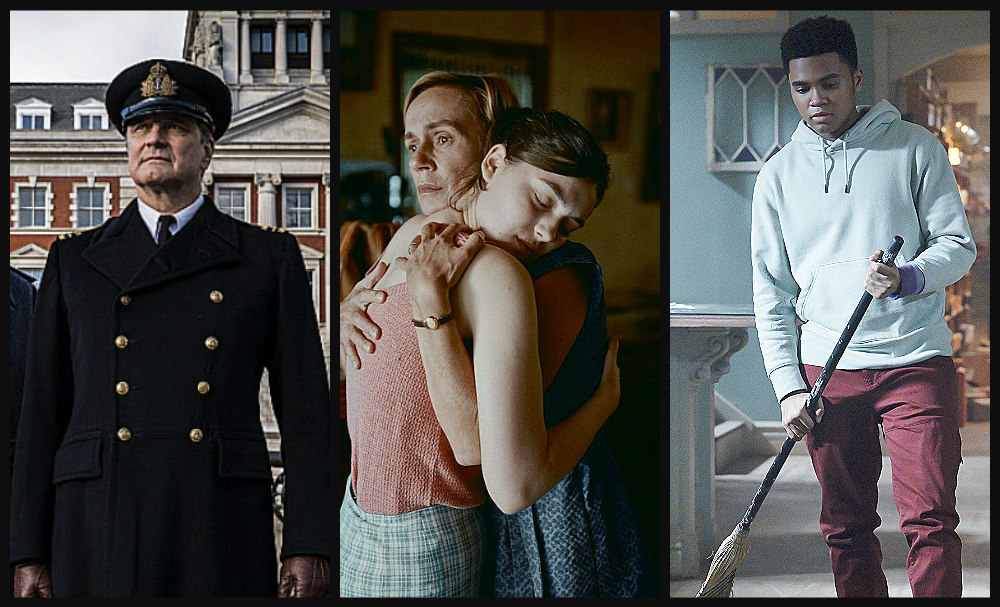 After Dr. Strange raked in a huge box office haul and is likely to do it again, it makes sense that there are no big films opening this week to go up against it. The smaller ones are worth your attention though as are the two documentaries I've included today. One is making a re-appearance though Hot Docs, where it played is now over. The other is from DOXA, which is still on through the weekend.

And here's early word on another event: the annual Human Rights Watch Canada Film Festival. It screens at the Hot Docs theater in Toronto and streams its films anywhere in Canada—for free. The opening this year is the world premiere of Klabona Keepers which shows indigenous groups in Northern British Columbia fighting against a huge coal mining project that's planned. I'll have more on it after it debuts May 26 and starts streaming May 30 but if you want to catch it that way you have to register now. Access is limited. For more info go to https://hotdocs.ca/whats-on/cinema-series/hrw-film-festival

OPERATION MINCEMEAT: It's a true story from World War II, has been told before in the 1956 film The Man Who Wasn't There and gets a classy new interpritation with lots of thriller-novel grade plot twists. The plan, dreamt up by a couple of British intelligence officers was to fool Hitler about invasion plans. They want him to think it'll be in Greece, when Sicily was the real target and they think that floating a dead body ashore with fake information in his pockets would do it. Ewen Montagu (Colin Firth) and Charles Cholmondeley (Matthew Macfadyen) are the plot leaders.

The easy part, as Montagu says, was finding a corpse. A sailor who died of rat poison will do. Getting him to look water logged and finding just the right look for the fake documents he bears is harder. Their real coup was to put a photo of his wife into just the most convincing pocket of his shirt. The photo is really of a team member played by Kelly MacDonald and there's some resentment and even hint of a love-triangle about that. There's also fear of a leak because a brother is a leftie and sympathetic to Russia, which of course Hitler has made a pact with. The film concentrates on all such details and is ostensibly narrated by another team member, Ian Fleming (played by Johnny Flynn). Watch him pre-imagine a lot of James Bond details. The film is generally more serious than that. Under John Madden's direction, it's most involving. (Netflix) 4 out of 5

HAPPENING: How timely is this? As we watch the Americans in another discordant debate over abortion, here's a film from France that reminds most dramatically what it was like before it became legal. And might, one side says, become so again. It's based on a personal memoir from 1963.

Anne is a top university student who slowly comes to realize she's pregnant. The film concentrates a lot on the stress she's going through. She checks often for any sign of blood. She's distracted in class. A doctor confirms her fears but refuses to help. It would be illegal. “You can't ask that of me,” he says. The father-to-be says it's her problem and is surprised she hasn't done anything about it. A friend sends her to a back-alley practitioner who has a tough, no nonsense approach. The procedure by her, an earlier self-try with a knitting needle, and talk of using bleach create a chilling tone and a later scene is horrifying. The film's view is clear about “the illness that only strikes women and turns them into housewives.” Anamaria Vartolomei, in the lead, has won awards, as has the film, including the top prize at Venice. It's a strong film. (Rent or buy at VOD sites like Cineplex) 4 out of 5

SNEAKERELLA: This is a seriously updated version of Cinderella. It's for the Instagram generation, so heavily concerned is it with style and appearance, in this case in the subculture that dotes on cool shoes. The script calls them “sneaker junkies.” You know the people who would line up or log on for hours to get hold of the latest release. That's the major twist the Charles Perrault fairy tale gets here, and by no means the only one. In this version the characters are black and the central one is male. Surprisingly, it works. The film is energetic, tuneful and full of good messages.

The scene is now New York City (actually, if you look closely, Toronto and sometimes Hamilton) and contrasts Queens (where El, played by Chosen Jacobs, is a lowly stock boy in his stepfather's shoe store) and Manhattan where Kira King (played by Lexi Underwood) is the daughter of a shoe business mogul. El and Kira meet; find they have much in common including the fanciful idea that sneakers are the window to your soul. They are “telling you a story about who you are.” Songs and street-filling dance numbers say that as well as the need to persevere with your dreams. El designs shoes himself, gets to an annual charity auction run by The King but has to leave at midnight and loses one shoe. How then can he get to the bigger event, Sneakercon and show off his work? A strong cast that includes Bryan Terrell Clark and John Salley, able direction by Elizabeth Allen Rosenbaum and a script that speeds along and misteps only a few times make this a light and pleasant winner. (Disney+) 2 ½ out of 5

THE LAST VICTIM: This is not the liveliest western but we don't get many these days so I'll take it. And it does have tension and a twisty plot that'll keep you involved. And how many times do we get to see British Columbia's Okanagan Valley, including the desert in its south, playing New Mexico? It looks convincing doing it too. And Naveen A. Chathapuram keeps the story moving briskly along. It's his feature directing debut after a lot of American TV work. Ron Perlman, Ralph Ineson and Ali Larter are the lead actors. They play a sheriff, a vicious killer and a driver lost on a road she doesn't know. Naturally, they'll meet up somehow.

The sherriff is investigating a killing at a remote cafe. The killer is trying to dispose of a body and is shooed away by a guy living in a trailer at the first place he tries. The woman, prompted by her husband in the passenger seat, is on a sightseeing drive.

The killer comes to think she may have seen him. They all converge at a remote wildlife refuge for chases, gun shots, vehicle fires and good suspense in trying to hide. There's violence but also style in how the film is shot and edited which elevate it quite a bit above the usual chase and survival flicks like this. (A VOD and digital release, available now) 3 out of 5

NAVALNY: It was too late to include it for Hot Docs last week, but here's another chance to catch it Saturday. CNN, which produced the film, is showing it again in the evening. It's worth your time to watch it because it tells you all you need to know about the man who became a major opponent of Russia's leader Vladimir Putin. Secondarily it's about Putin himself who tried to have Alexey Navalny poisoned, presumably to stop his revelations through his Anti-Corruption Foundation.

Incidentally, a major report that it produced is free to watch on Utube. Look for “Putin's Palace.” It seems to have prompted the poisoning attempt, which happened on a trip to Siberia and caused a medical scene on a plane back. It was videod and went viral on the internet. Directed by Daniel Roher, the film follows what happened after that and with a subsequent interview with Navalny and close access to people around him explains as much as we need to know. His whole story isn't there, not the many times the authorities charged him and nothing substantial about some statements he made in the past. We do see an arrest and in a thrilling sequence get confirmation that there is a move to poison opponents. A plotter all but admits it when we see Navalny call and pretend to be an official asking about one action. Very good content; as good as any political thriller. (CNN) 4 ½ out of 5

DOUG AND THE SLUGS: How about something lighter and fun. The band was into that when it became a west coast favorite back in the 70s and then, signed to a major label, became nationally-known too. For a while. That's one theme of this film by Teresa Alfeld, who was a neighbor of Doug Bennett's family and best friends with one of his daughters. The film is partly about her memories and largely a profile of a band through interviews.

You'll catch Bob Geldoff, who worked with Bennett at The Georgia Straight, three band members, former neighbor and continuing culture commentator Steve Burgess and most interesting to me, Sam Feldman a key music industry legend in Vancouver and the band's manager for some time. He makes the telling observation that there are two setbacks bands suffer: not making it at all or making it but reaching a plateau and making no further progress. The second one happened here. The films outlines it all. Both the rise and the fall, are fascinating. Drugs, ego and anger are in there too. (Screening at DOXA Saturday and twice Sunday and streaming after the Saturday "world premiere") 3 ½ out of 5