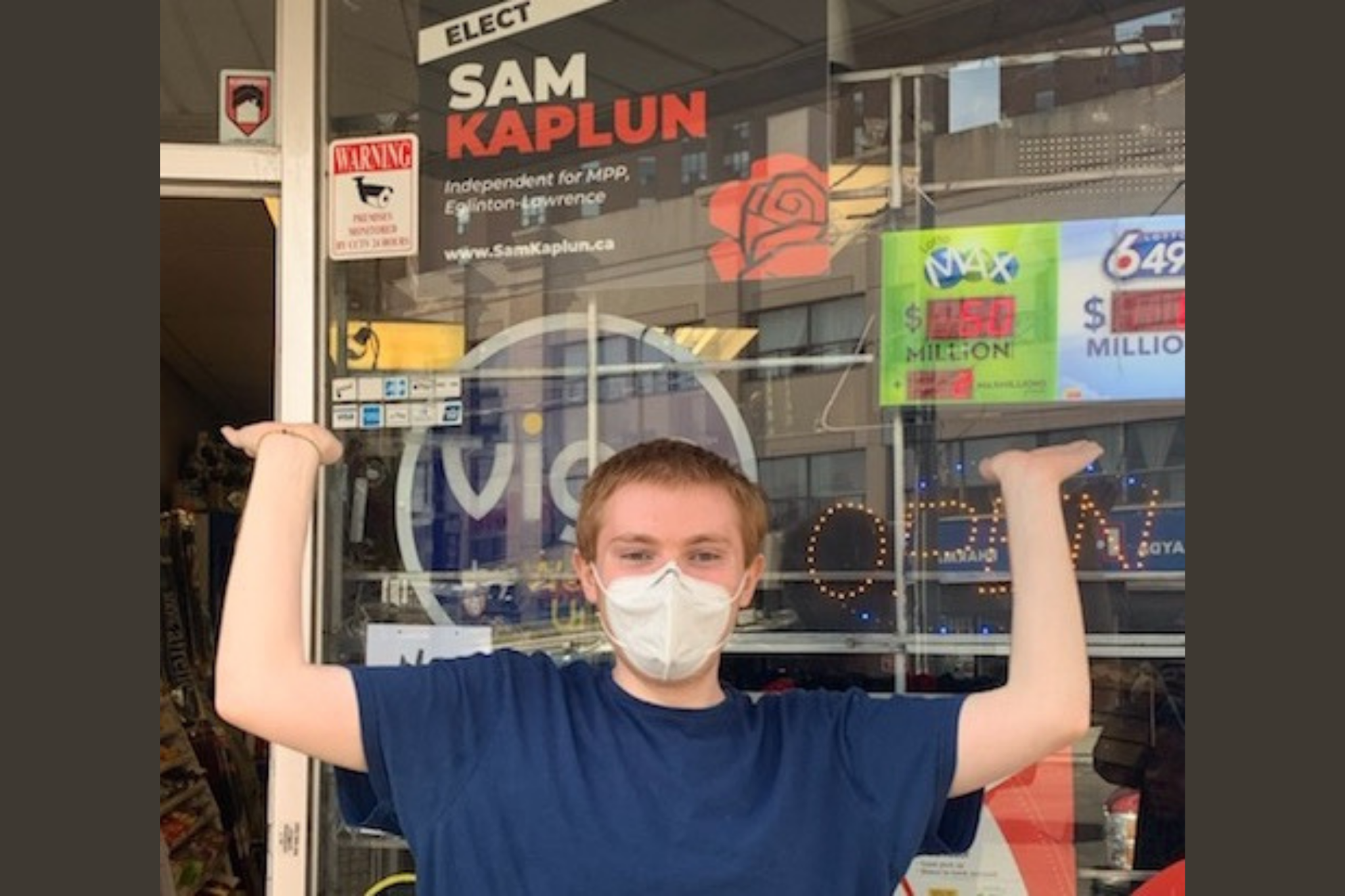 Sam Kaplun doesn’t have a lot of structural advantages as possibly the youngest candidate in the ongoing Ontario election campaign, but he’s not letting that stop him from sharing his views and hearing the concerns of residents in his Eglinton-Lawrence riding.

“I suppose you have to be a bit of a masochist to run as an Independent candidate if you're not already a person of notoriety,” the 19-year-old student said in a recent interview.

But Kaplun has also noted many of the people who open the doors he’s knocking on become more positive when they learn he is not from one of the main parties vying for power in the June 2 vote.

“Very few people, even fewer than I’d expected, have said they’re not interested or told me to go away. Very few people have been rude to me,” he said.

While the socialist activist says it would be impossible to make an exhaustive list about what he’d like to change if he were elected, Kaplun has focused his campaign especially on a call to double disability support payments.

“ODSP (Ontario Disability Support Program) has been kept so criminally low that people can’t afford rent or food, and a small handful are, due to poverty and not their physical conditions, electing to engage in medically assisted suicide, which is frankly dystopian,” he said, referring to recent news of cases where people with disabilities were unable to get the resources they needed and chose to seek out assisted suicide.

Kaplun says he also wants to push for housing for all, a jobs guarantee, increased funding for education and improvements in transit, among a range of social justice priorities. He argues that investments in working-class and low-income people contribute far more to the economy (and, therefore, government tax revenue) than austerity measures.

“These are not a set of promises that I’m going to enact, these are a set of policies that I want to join the fight for,” he said, acknowledging his biggest impact might be in holding to account candidates who are more likely to win the riding.

Whether he is elected or not, Kaplun said his goal is to empower community-level social movements that challenge the status quo, such as mutual aid networks and community land trusts, and push civic debate in a progressive direction “more focused on the grassroots rather than centring our political discussions on conventional politics.”

While candidates affiliated with political parties can rely on their riding associations to help with logistics in the lead-up to the one-month campaign, as an Independent, Kaplun was forced to wait until the writ dropped to start fundraising and spending on lawn signs and flyers.

Whether he is elected or not, 19-year-old Sam Kaplun, who is running as an Independent in the Eglinton-Lawrence riding, said his goal is to empower community-level social movements that challenge the status quo. #OnElxn

He has since raised enough money to pay his graphic designers, get his website set up and buy 10,000 flyers and 50 lawn signs, around 30 of which have already found homes with supporters.

He plans to canvass non-stop for the next month, which he acknowledges he is fortunate to be able to do, and says the act of running itself holds significant value.

“It gives me a chance to speak with thousands of people in my community, hear what their perspectives are, what their lives are like, [and] of course, what sort of policies are important to them and what they’d like to see in their elected representative.”