If Jason Kenney's arch rival Brian Jean has his way, there will be no long goodbyes 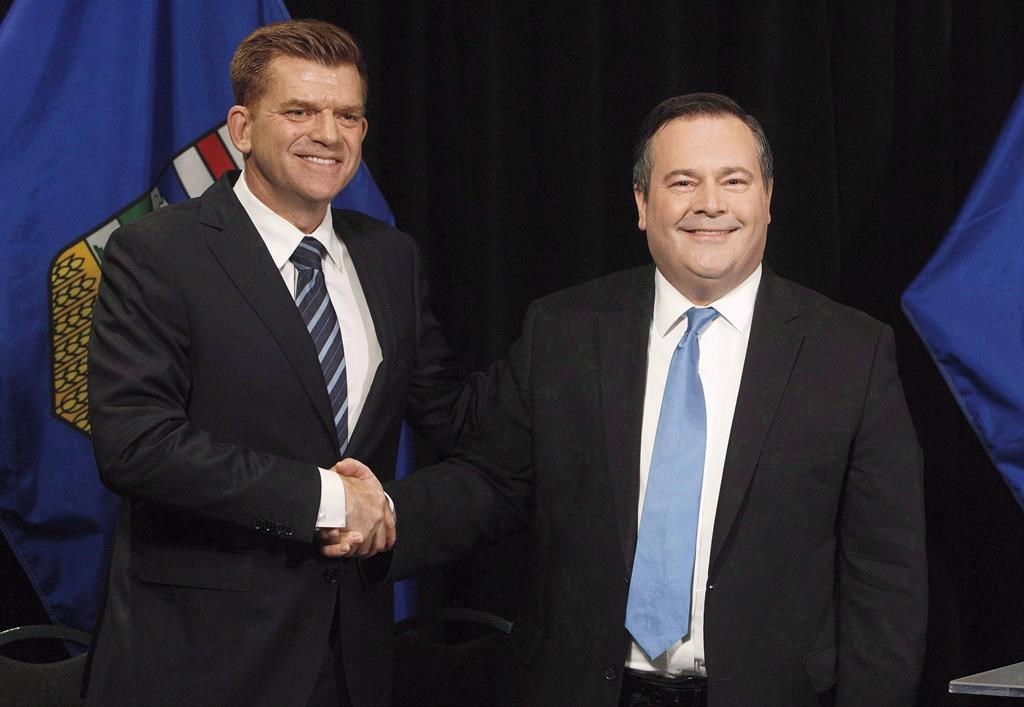 Alberta Wildrose leader Brian Jean and Alberta PC leader Jason Kenney shake hands after announcing a unity deal between the two parties in Edmonton on May 18, 2017. Photo by: The Canadian Press/Jason Franson
Previous story
Next story

Jason Kenney’s main caucus critic says the Alberta premier needs to quit at once, and a new interim boss selected, ahead of the race to pick a new United Conservative Party leader.

“The healing process can’t start until Jason Kenney leaves. He knows that. We know that and we need to start the renewal process of the UCP," Brian Jean said Thursday before heading into a UCP caucus meeting in Calgary.

“Jason Kenney knows parliamentary tradition,” added Jean, a former leader of the Wildrose Party, which merged with Kenney’s Progressive Conservatives to form the UCP in 2017.

“It would be parliamentary tradition for him to step down immediately, as he has indicated.”

Jean lost to Kenney in the inaugural UCP leadership race, but came back to politics earlier this year and won a seat for the party on a platform to oust Kenney as leader.

Kenney’s caucus was meeting to determine next steps a day after the premier announced it was time to leave, given he had received 51 per cent support in a party leadership review.

Kenney did not provide specifics, leading to conflicting reports on whether he will step aside as premier immediately or stay until a new leader is chosen months down the road.

Backbencher Leela Aheer, who was kicked out of Kenney’s cabinet last year after criticizing him on his handling of the COVID-19 pandemic, said on her way into the caucus meeting that it's a "beautiful moment" for the party.

“The truth is that the only thing I’ve ever wanted was to have an opportunity to be able to prove to people who we are and to end the corruption and the cronyism and to be able to start a new day with hope for Alberta."

She said the party should appoint an interim leader.

“You need a team player who is going to bring folks together, because there’s obviously been a lot of division," Aheer said.

“That should be the voice of caucus,” he said. “This is a great way for democracy to prevail.”

Drew Barnes, voted out of the UCP caucus a year ago for criticizing Kenney, also called for an interim leader so the party "can begin turning the page on the mistakes of the past three years."

Jean and another former Wildrose leader, Danielle Smith, have already announced they will run to replace him.

Smith said the party needs to renew itself after being asked by reporters Thursday whether Kenney should leave right away.

But she also said Kenney, who is Catholic, has done a lot of work on the First Nations reconciliation file, which culminated in a recent apology by Pope Francis for the church's role in the deaths and abuse of Indigenous youth in residential schools.

She noted the Pope is coming to Alberta in late July.

“If he wants to stay (through July) and be premier so that he can, I think, receive the honour that he deserves for helping make the Vatican realize they needed to take that important step, I wouldn’t object to that,” Smith said.

"I wish him the very best in whatever next steps he takes on."