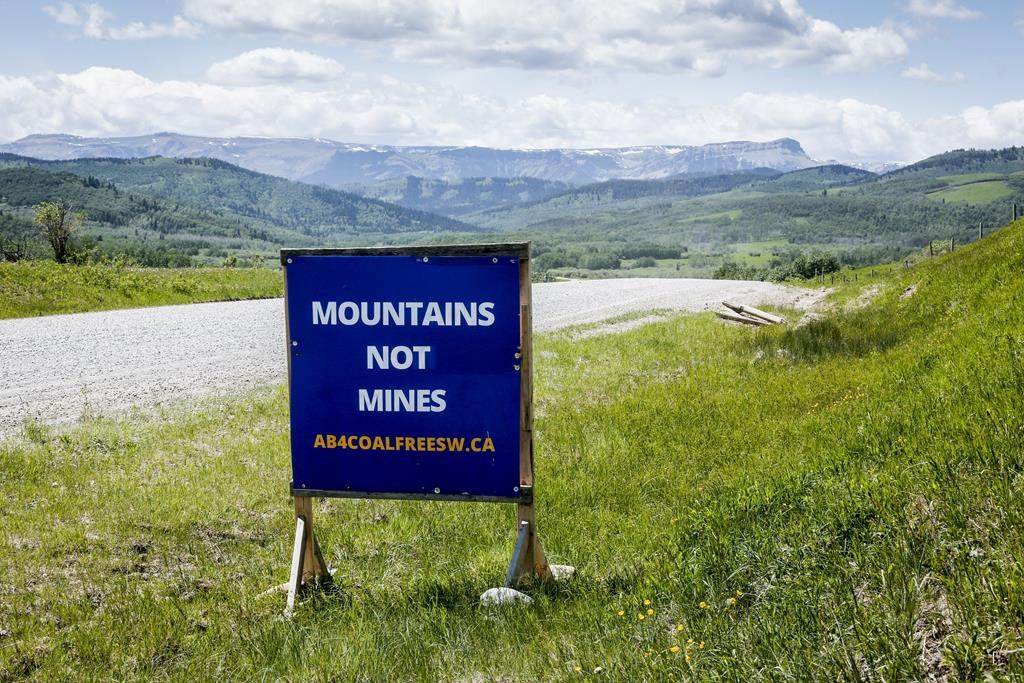 A sign opposing coal development in the eastern slopes of the Livingston range south west of Longview, Alta., on Wednesday, June 16, 2021. File photo by The Canadian Press/Jeff McIntosh
Previous story
Next story

A southern Alberta town has become what it says is the first municipality to endorse a community−developed policy that calls for a permanent ban on new coal exploration and development in the Rocky Mountains.

"We’ve always wanted to keep our involvement in continuing this fight until we’ve reached the finish line — and we’re a long ways away from that yet," Craig Snodgrass, mayor of High River, said in an interview Wednesday.

The Canadian Parks and Wilderness Society said High River has joined 30 organizations in signing a document called "A Coal Policy for Alberta — 2022 and Beyond."

Katie Morrison, executive director for the southern Alberta chapter of the society, said the document draws on a resolution made by the town of High River last year.

"It really did address clearly how we could address the concerns of Albertans and permanently prohibit coal in Alberta and immediately make that step," Morrison said.

The policy, she said, outlines ways to deal with Albertans’ concerns by saying no to new coal exploration and mines, phasing out existing coal mines and coming up with a remediation plan for lands disturbed by mining.

Snodgrass said the document keeps the conversation about coal going.

"This group that put this document together did an excellent job and it’s just the next step of what needs to happen to fulfil the wishes of Albertans in putting an end to coal mining."

The policy was created with input from a wide range of Albertans, including Indigenous groups, hunters, anglers, ranchers, rural landowners, businesses, conservationists and recreationists.

"The government and all parties should reflect on the directives in this policy and adopt them and implement them toward a new modern coal policy for the province," said Morrison.

The United Conservative government two years ago revoked protection from coal development on the summits and foothills in southwestern Alberta that had been in place since 1976.

Thousands of hectares were quickly leased for exploration, but a public outcry forced the government to halt those activities and pause lease sales.

A statement from Alberta Energy said the government listened to Albertans and put strong new restrictions in place to protect the eastern slopes of the Rockies.

"In March, a ministerial order was implemented that extended the restrictions on coal exploration and development to protect the eastern slopes until new or updated land−use plans are in place," said the statement." The reinstated 1976 coal policy also remains in place.

"Our approach is based on the reports and recommendations of the coal policy committee, which spoke directly to Albertans about coal, and which we fully accepted."

Ron Wallace, who was the chairman of the committee, said he’s pleased the government accepted its recommendations.

"We’re looking forward very much to seeing policies and procedures that are brought forward by the government of Alberta that actually implement those recommendations," he said.

Wallace said he has received a copy of the community document.

"It looks like their work is pretty much based upon and consistent with the work of the coal policy committee," he said. "In that regard, I am really pleased to see the momentum and the interest that is going forward on this file.

"This report will be of value to the government of Alberta as it develops its implementation plans to deal with our recommendations."