Our wetlands are drowning 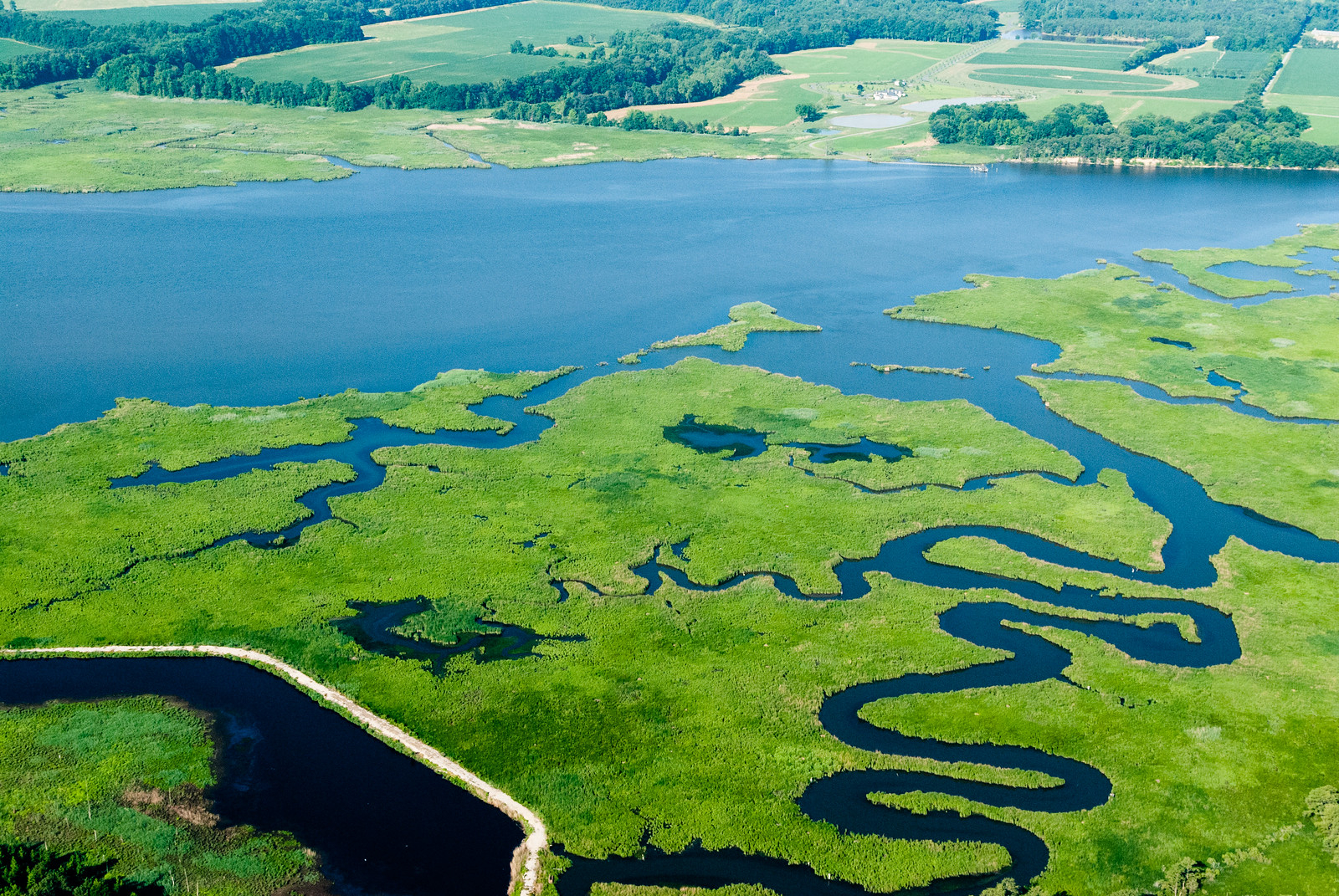 Schoenoplectus americanus, or the chairmaker’s bulrush, is a common wetland plant in the Americas, and it has an existential problem. It has chosen to live in a place where it is always at risk of being drowned.

Like all plants, the bulrush requires oxygen to produce energy. One solution is obvious: Send shoots skyward like straws to suck down oxygen to the roots. But the bulrush also employs a more unusual strategy: raising the ground on which it grows. The plant builds its roots near the surface, where they trap the sediment and organic muck that flows into the marsh. Eventually, the whole ecosystem stands a little taller, and the bulrush isn’t smothered.

“We often call them ecosystem engineers,” says Pat Megonigal, an ecologist who directs the Smithsonian’s Global Change Research Wetland and studies the plants. “If the water gets deep, they have the ability to raise themselves up. And, in fact, right here at this marsh they’ve been doing it for 4,000 years.”

For a long while, wetland researchers have wondered whether that skill could help the plants build their way out of climate change. As sea levels rise, bringing fiercer and more frequent storm surges, so does the risk that the plants will drown. But increasing levels of carbon dioxide in the atmosphere are also a boon to the plants’ basement construction project, providing more fuel for photosynthesis and helping them build bigger roots. For 30 years, Megonigal and his predecessors have been watching this marathon unfold in a single marsh in Maryland on the Chesapeake Bay. It’s a duel between sea rise and plant growth, two forces with a common origin — humans burning fossil fuels, adding more CO2 to the air — and at this point, the result is becoming clear: The wetlands are losing.

Those findings, published recently in Science Advances, are upending some of the more optimistic assumptions about how coastal areas might adapt to rising seas. Wetlands are important ecosystems in their own right, and they mediate the flow of nutrients between land and sea. They also punch above their weight in terms of carbon storage, packing it away in dense peaty soils at concentrations that exceed those found in tropical forests. But the fate of those areas is uncertain in the face of climate change. By the end of the century, estimates suggest that climate-induced changes may cause 20 to 50 per cent of those ecosystems to be lost. The ability of wetlands to raise themselves above rising waters is a key factor that will determine whether they can persist where they are or will need to migrate inland.

“Wow. We always thought elevated CO2 would help stabilize marshes, and this work really challenges that idea,” says Matthew Kirwan, an ecologist at the Virginia Institute of Marine Science who studies how coastal landscapes evolve. “Thirty-year experiments are almost unheard of, and in this case fundamentally changes how we understand marshland ecosystems.”

"This is a race. A race between what CO2 can do and what sea level can do." New futuristic climate study reveals that when sea level gets too high, the power of higher CO2 to boost plant growth—and help wetlands outpace sea-level rise—starts to vanish: https://t.co/w6N9hhleQO pic.twitter.com/nH1BT7wdSo

The experiments began in the late 1980s, a time when many scientists were already well aware that atmospheric CO2 was rising thanks to fossil fuels. But what would happen to that extra carbon was an open question. Could natural forces help restore the balance by packing it in soil? Greenhouse studies were encouraging. About 90 percent of the world’s plant species use a form of photosynthesis called C3, which involves a chain of chemical reactions that is limited by the availability of carbon. With more of it, they can produce more sugars and build bigger stalks and roots and potentially help store more carbon.

A long-term study of a marsh was meant to ask whether rising levels of CO2 could help #wetlands thrive despite rising seas. The plants aren’t keeping up. #ClimateChange #GHG #RisingSeas

But outside climate-controlled walls, that process is less certain. Climate change isn’t just about rising CO2 levels or, for that matter, about rising temperatures. In a given place, it might cause the air to get too dry or too wet, or the land too salty for a plant’s liking. It might dry up a river, stopping the flow of fresh nutrients. It might cause bigger storms that bring more floods. It might cause the collapse of one species within an ecosystem, like a key pollinator, that would bring down many others. For a plant, the extra CO2 might be good if you can get it — but only if other changes don’t kill you first.

Hence the Smithsonian research wetland. The marsh is scattered with open-topped, hexagonal chambers about the size of a mini fridge, each of which contains a slightly altered universe. The first set of experiments, which began in 1987, involved cycling in air that contained elevated levels of CO2 — in line with concentrations expected in 2100. For the plants living in this carbonated future, things started off well. Through the Clinton years, the plants grew faster, just as expected, though the benefits of the extra carbon varied from year to year depending on wetness and temperature.

But over time the benefit of the extra CO2 tapered and then eventually stalled. The plants’ roots, in particular, were scrawnier than they ought to be. Something was going wrong. So the researchers started to investigate. Over the past two decades, they had already dotted the landscape with more chambers — some with wires to heat up the ground, others with more or less nitrogen added to the soil — trying to isolate the effects of those other environmental changes. But when they compared the data from the various plots, none could adequately explain the plants’ waning enthusiasm for the extra CO2.

So they turned to another, unexpected culprit: the sea. It had been rising, they realized, over their experiments, climbing about nine inches in the area since the late 1980s. “One thing about running a long-term experiment is that real-world changes catch up with it,” Megonigal says. They hadn’t intended to study sea-level rise, but here it was. While the plants could manage being submerged for some time, the extra time underwater likely meant more stress, resulting in less growth even with the extra CO2.

In other words, more carbon was helpful for these plants — until sea-level rise caught up with them. In the short term, the plants grow more robustly, outpacing the water, which very likely enhanced their role as carbon sinks, answering the question the researchers posed back in the 1980s. But eventually, the reckoning came. In the long term, it’s increasingly likely that the sea will swallow the whole ecosystem.

“This paper is dealing with a problem that has been vexing us for a long time, which is that climate change isn’t just one effect,” says Anna Braswell, a coastal ecologist at the University of Florida who wasn’t involved in the research. Researchers are eager to include the new data on elevated CO2 and sea-level rise into models of wetland growth and loss, which are often built around assumptions that plants will produce more elevation gain thanks to increased CO2. Ideally, it would be best to replicate the experiments elsewhere, for more kinds of wetland ecosystems. But it’s tricky to do that quickly. “No one else has monitored elevated CO2 for 30 years,” says Kirwan.

In areas where the surrounding land is low and gently sloped, marshes have the ability to migrate a little further inland. That’s broadly true in places like the Chesapeake Bay. Elsewhere, steep ridges around the wetlands prevent much movement. But the bigger wild card is humanity — whether the path of a moving wetland turns out to be hemmed in by houses and factories, or will be affected by seawalls and other measures to hold back rising tides. “The biggest source of uncertainty was what humans will do to protect the coastlines,” Kirwan says.

Lately, Megonigal has noticed that his particular marsh is struggling. The familiar flora is changing, as some of the more adaptable plants take root in places occupied by those that can’t keep up with the changes. (Some of the less-adaptable ones use a different photosynthesis known as C4 and don’t benefit from rising CO2​​​​​​​.) The landscape is forming what wetland ecologists call hummocks and hollows — a corrugated scene of clustered plants and barren trenches where no plants grow — a sure sign of stress among the plants. Surrounded by steep slopes, this particular marsh has nowhere to go as the area slowly floods.

“It’s overcoming a cycle that has been going on for 4,000 years,” Megonigal says. But the experiment goes on.