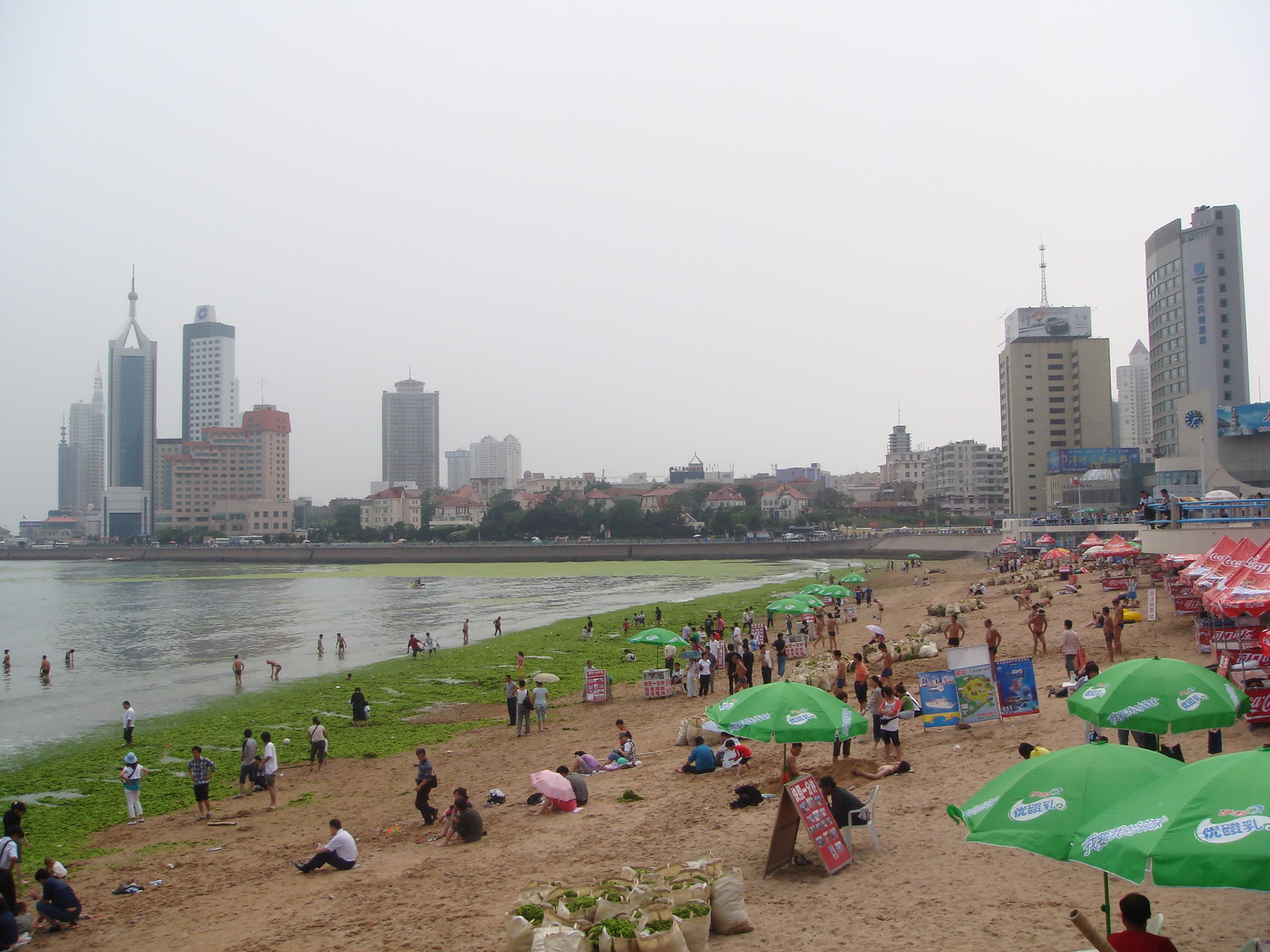 Algae blooms cover Qingdao Beach, China. Phosphorus is a major cause of water pollution because the runoff from fertilizer use produces an excess of nutrients leading to algae blooms. Photo by liddybits/ Flickr (CC BY 2.0)
Previous story

Sewage could provide a novel way of helping consumers with soaring food bills and reducing pollution in our waterways — if sewage plants separated out phosphorus, a vital ingredient of fertilizer, according to a new report.

Phosphorus, found naturally in all plants, is essential for growing plants but its use as a fertilizer is creating widespread pollution in developed countries because much of it is wasted. Phosphorus is a leading cause of water pollution, as the runoff from fertilizer use in fields produces an excess of nutrients that upset the natural balance of rivers and ponds, leading to algae blooms that harm fish and plants.

Bryan Spears, professor at the U.K. Centre for Ecology and Hydrology (UKCEH), and a lead author of the most detailed report yet on the phosphorus problem, said: “Phosphorus could push us to the brink of a food security crisis. It is a finite resource, and it is overused in developed countries while developing countries do not have enough. It is a major cause of pollution as it upsets the ecological balance [in waterways]. Phosphorus pollution also threatens drinking water supplies.”

He said that phosphorus supplies were rising sharply in price, which would threaten food security if governments did not act to reduce the waste of phosphorus in our farming systems, and encourage its recycling from sewage and other sources.

The report, written by 40 international experts and led by UKCEH and the University of Edinburgh, shows that much more could be done, and at a low cost, to recover phosphorus.

Prices have soared from about $240 a tonne to more than $900 a tonne for some forms of phosphorus-bearing rock as the Ukraine war has disrupted fertilizer production. Phosphorus rock comes from only a handful of countries, chiefly Morocco. Most fertilizers use a mixture of phosphorus, nitrogen and potassium (NPK), and Ukraine and Russia are both major fertilizer suppliers.

The high prices for fertilizer have left farmers nursing big losses, unable to plant crops, or facing smaller yields. Food prices for consumers, already affected by supply problems and the knock-on impacts of high energy prices, are rising further as a result.

“I would love if Coca-Cola could develop an alternative, to use recycled phosphorus — to take the pollution out of our rivers and lakes and turn it into a drink,” says scientist Will Brownlie. #Phosphorus #Sewage #Pollution #AlgaeBlooms

The UKCEH scientists said farmers could also save money and reduce the waste of phosphorus by using fertilizer more efficiently, as most of the phosphorus in fertilizer is now wasted in runoff. This can be as simple as targeting fertilizer at crops and injecting it in the soil and avoiding its use just before heavy rain is expected.

To achieve this, the scientists urge governments to improve wastewater treatment to remove and reuse phosphorus from sewage; to help farmers with more targeted techniques for using fertilizer; to encourage more livestock manure to be converted into fertilizer as an alternative to chemical fertilizers; and for people to eat less meat, which would reduce the amount of phosphorus currently used to grow animal feed.

A spokesperson for the U.K.’s Department for Environment, Food and Rural Affairs said the government was acting: “Phosphorus pollution into our rivers has reduced by 67 per cent over the last two decades. We have proposed setting long-term targets in our Environment Act to further reduce phosphorus pollution from agriculture by 40 per cent and from wastewater by 80 per cent by 2037.”

UKCEH scientists estimate that the capital investment required in the U.K. to recapture phosphorus from sewage is about £1.6 billion, which would easily be outweighed by the benefits of reusing the recovered mineral as a fertilizer.

One small but significant use for phosphorus is in drinks such as Coca-Cola, in which it is used as a preservative. Taking it out could cause changes in the taste, but an alternative would be to source phosphorus from recycling — which would have consumers effectively drinking a byproduct of urine.

Will Brownlie, a freshwater scientist from Edinburgh University who co-ordinated the report, said: “I would love if Coca-Cola could develop an alternative, to use recycled phosphorus — to take the pollution out of our rivers and lakes and turn it into a drink.”

Coca-Cola did not respond to The Guardian’s request for comment.

Recent article about 'Pee-cycling' from the New York Times:
https://www.nytimes.com/2022/06/17/climate/peecycling-farming-urine-fert...

A company called PAE Engineering in the United States specializes in what it so-called 'Living Buildings' which is are building constructed to a certain standard of environmentally-sustainable building design. Its first Living Building, in Portland, Oregon, which also incorporates its own offices there, has 18 vacuum-flushed toilets which feed into 20 compost bins. The building is also designed to collect greywater, from sinks, dishwashers, and outside precipitation, which it uses to flush the toilets, and for watering outside gardens on the property.
Composting toilet design, PAE building:
https://www.sierraclub.org/sierra/2021-4-fall/stress-test/gritty-truth-a...
About ‘Living Buildings’:
https://livingbuilding.kendedafund.org/living-building-challenge/
About the PAE building:
https://www.pae-engineers.com/projects/pae-portland-living-building

Actually, there were, and

Actually, there were, and probably still are, composting toilets on the 2nd floor of the Mountain Equipment Coop store in Winnipeg.