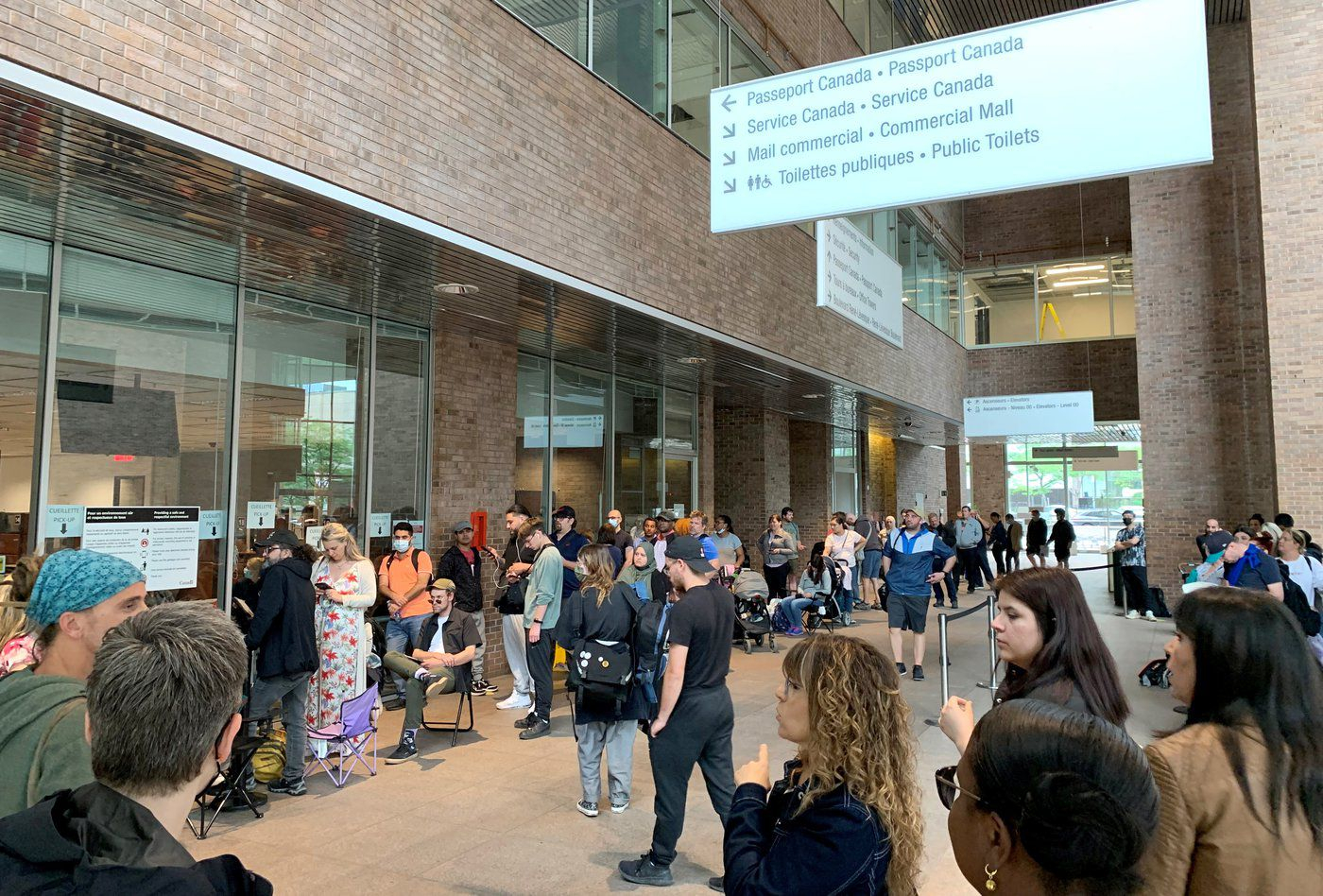 People wait in the line outside the passport office in downtown Montreal, June 21, 2022. Photo by The Canadian Press/Jacob Serebrin
Previous story

After spending the night outside a downtown Montreal federal building, Christian Bourque said Tuesday he expected to have to wait another night before getting a chance to renew his daughter's passport.

Bourque was one of dozens of people — many of whom had flights within 48 hours — who were camped out hoping to renew travel documents for themselves or a child. Bourque, who was trying to renew his 15-year-old daughter's passport, arrived in line on Monday and said he thought he would be able to enter the office by Wednesday.

"We haven't seen our son for a year, he lives in Portugal," Bourque said in an interview. "My youngest daughter needs a new passport. We sent them the request about two and a half months ago -- they said it will take about 20 working days and here we are almost three months later."

By early afternoon around 60 people were waiting outside the federal building and dozens more had left empty chairs to hold their places in line.

Since April, long lines have been reported at passport offices across the country amid a surge in applications and renewals.

Dave Mustaikis said he arrived at the office around 2 p.m. on Monday.

He was lucky. He received an appointment for the following day — after spending the night outside.

"It will be alright if I get my passport in the end," he said.

Inside the building, around two dozen waited in the foyer, hoping to speak with passport officials.

Florent Cohen, who had been waiting since shortly after 4 a.m., said he was told he needed to come to the office 48 hours before his departure to use the emergency procedure to get a passport for his four-month-old son.

Cohen, who wants to introduce his parents — who live in France — to his newborn, said passport officials have been unhelpful.

"They didn't provide us any answer on what's going on, what to do next," he said, adding that he's frustrated by "the lack of communication and explanations about the procedure."

In Ottawa, Families Minister Karina Gould said the delays, which she had earlier described as "unacceptable," are the result of the high volume of passport applications.

"I completely understand and get the frustration of Canadians on this," she told reporters. "Passports (are) something that a lot of people haven’t had to worry about in the past, but because of the high volume that we received over the past couple of months, it’s putting a big strain on the system."

But Kevin King, president of Union of National Employees, which represents employees at passport offices, said the additional workers aren't able to authenticate passports because they didn't go through the 12-week training program. The work that the transferred employees do has to be validated by a passport officer, he said.

"Pulling people from other government departments to assist with things like traffic flow and stuff like that, with queues at offices, does not solve the problem," he said in an interview Thursday.

King said he's worried about the lack of civility from some people waiting for their passports.

"There have been examples in Montreal … where employees have been jostled, verbally harassed," he said, adding that some of that harassment has taken place as workers are leaving their offices.

In downtown Toronto, about 10 people waited in line outside the passport office on Tuesday afternoon, a couple of hours before it was scheduled to close for the day. David Sumantry had been waiting in line for about an hour, the second last person to get a spot before security started to turn people away.

“I got really lucky,” he said. “I sort of feel like people are just sort of resigned to this. They’ve heard about it in the news and everything and are just like, ‘This is what we have to deal with,’ but nobody is excited for sure.”

In Montreal, Bourque said he doesn't understand how the government didn't plan for the increase in passport applications.

"There's something a bit Soviet about the surroundings," he said. "I don't understand how this could happen in Canada."

— With files from Jordan Omstead in Toronto.