Price of fuel likely to go higher, just in time for your summer vacation 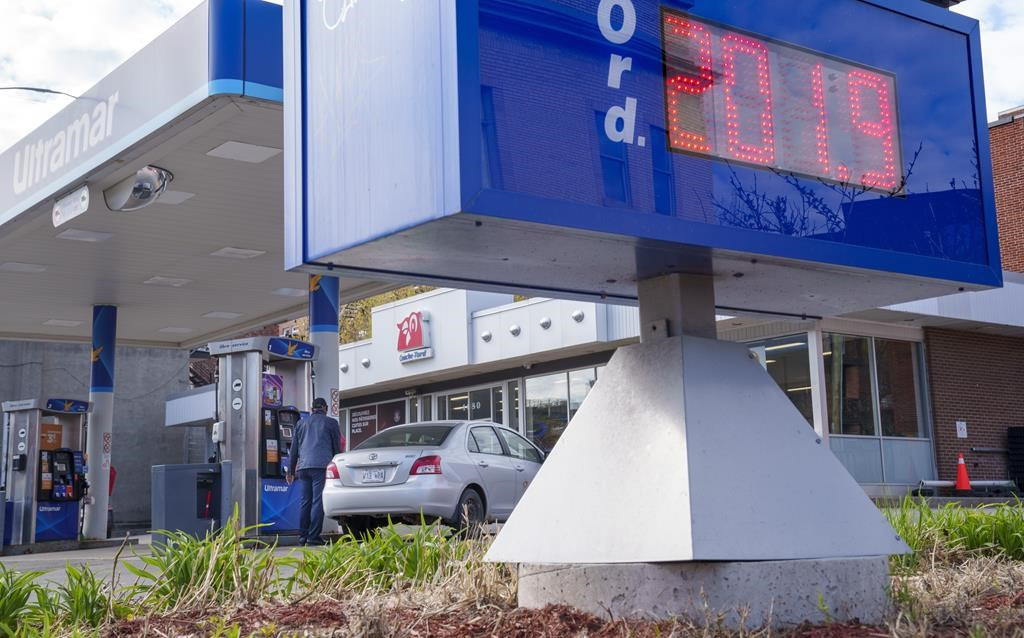 The price of gas is seen as a motorist fills up at a gas station in Montreal on Friday, May 6, 2022. Photo by: The Canadian Press/Paul Chiasson
Previous story

In May, customers paid 48 per cent more at the pump than a year earlier as a result of high crude oil prices, caused in turn by supply bottlenecks after Russia's invasion of Ukraine and a leap in demand prompted by eased COVID-19 restrictions.

The price of gasoline jumped 12 per cent between April and May, the largest one-month price increase since January 2003, the agency said Wednesday. That surge helped propel last month's 34.8 per cent rise in energy prices year over year.

Gas prices are expected to rise another five per cent in June, projected Bank of Montreal chief economist Douglas Porter.

"In other words, we have a problem," he said in a research note.

"While energy will shoulder much of the blame for the latest spike, it's important to note that many measures of core inflation are now at or near five per cent, so this is well beyond a one-off move that will quickly fade even if oil prices relent."

Services, which are driven mainly by domestic forces, are now up 5.2 per cent year over year, Porter noted.

The cost of consumer items as a whole rose 7.7 per cent last month compared with a year ago, its largest increase since January 1983 when it gained 8.2 per cent, StatCan said.

Higher oil prices have also pushed up jet fuel's price tag. The figure hit US$176.13 per barrel in North America on Friday, up 17 per cent from a month earlier and 126 per cent from a year ago, according to the International Air Transport Association.

In May, customers paid 48 per cent more at the pump than a year earlier as a result of high crude oil prices, caused in turn by supply bottlenecks after Russia's invasion of Ukraine and a leap in demand. #gasprices #cdnpoli

"I would expect airfares — most definitely in comparison to what they were in 2020 and 2021 — will be higher. We'll see how they compare to 2019," said former Air Canada chief operating officer Duncan Dee in an interview.

Of the 18 cities highlighted by StatsCan, average gas prices in May notched highest in Vancouver and Victoria at $2.20 per litre and $2.17 per litre respectively. Quebec City and Montreal took third and fourth place, sitting between $2.05 and $2.07.

Alberta and Saskatchewan enjoyed the lowest regular unleaded gas prices with Edmonton at $1.63, Calgary at $1.67 and Regina and Saskatoon hitting $1.81.

Premier Jason Kenney cut Alberta's 13 cent provincial excise tax on gasoline on April 1 and said it will stay gone as long as the global benchmark price for oil is above US$90 a barrel.

Energy could get costlier still, with Toronto-Dominion Bank chief economist Beata Caranci projecting crude oil price increases will rise even higher in the third quarter than the second-quarter average of US$110 per barrel, before tapering of toward US$100 by year's end.

In a report Wednesday, she said a "reduced fear premium, some demand destruction and modestly higher global supply" would drive the eventual decrease.

Much of the price climb owes to supply-chain disruptions brought on by the pandemic and now the war in Ukraine, as the conflict shrinks the global pool of oil available to the West and sucks some away from North America to European shores, said Ian Jack, vice-president of public affairs for the Canadian Automobile Association.

"There's a lot of speculation and we think that's driving up the price as well," he said in an interview.

Consumers and workers will bear the brunt of the price bump.

"You might choose to stay home this summer instead of driving across North America for two weeks ... but a lot of people need to drive on a daily basis because of their work, because of daycare, summer camp now that it's the end of June, and to do their shopping."

In a recent survey, some 71 per cent of respondents said rising gas prices and inflation generally have made them less likely to travel for leisure this year.

Nonetheless, 54 per cent of respondents plan to take a road trip this summer, according to the online poll of 1,000 Canadians conducted in May by Ignite Lab for Rakuten Canada, a rewards points company.

High gas prices can be further pinned on "years of underinvestment" at home by energy producers, said Robert Fitzmartyn, managing director and head of energy research at Stifel FirstEnergy in Calgary.

"The carbon tax isn’t even at $170 a tonne yet. So prepare for higher prices," he said in an interview.

Rarely have I been happier to

Rarely have I been happier to own an electric car.