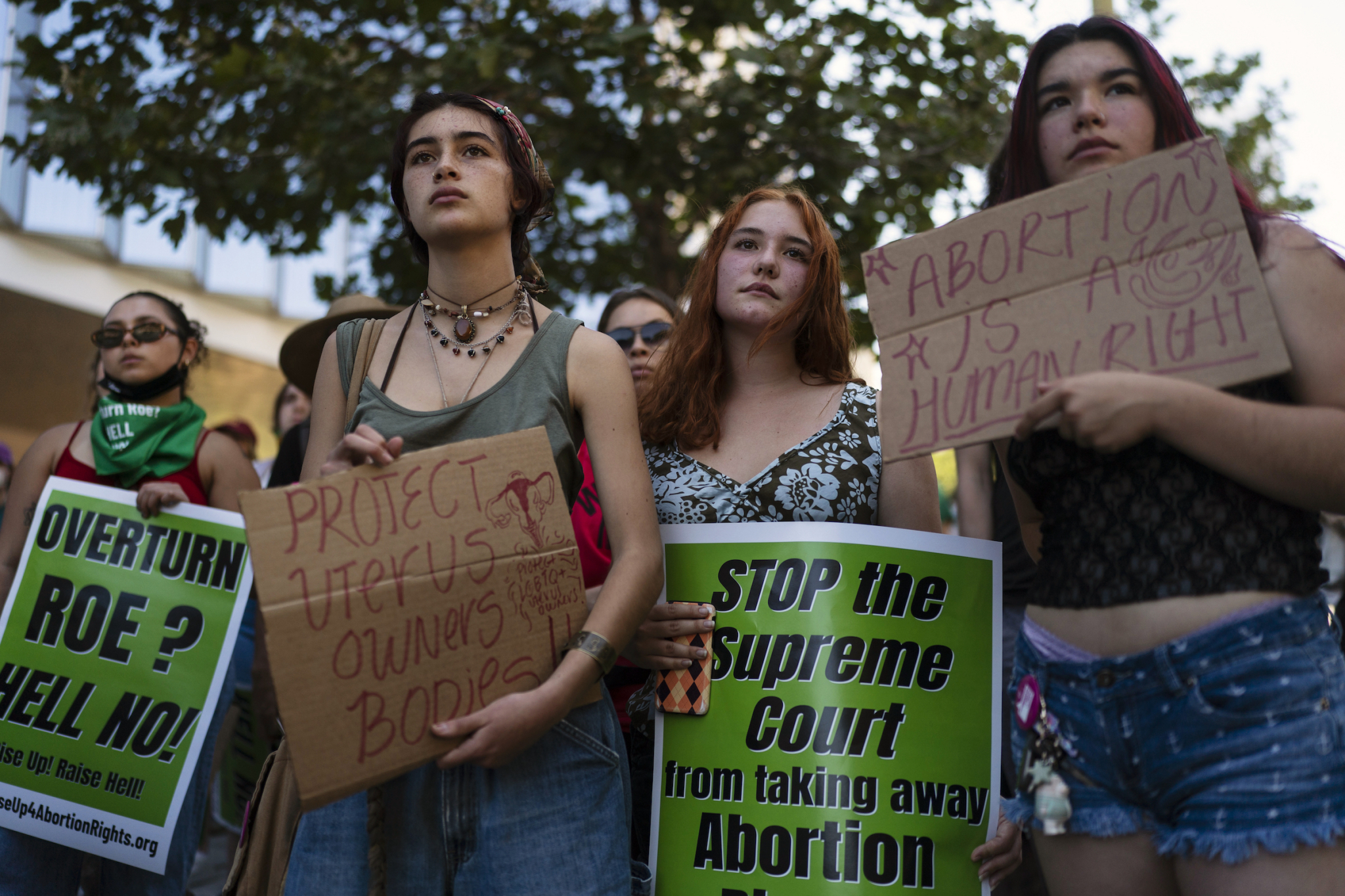 A group of young women listen to a speech during a protest outside a federal courthouse in Los Angeles on Friday, June 24, 2022. (AP Photo/Jae C. Hong)
Previous story

For weeks now, we’ve known the U.S. Supreme Court would almost certainly overturn the landmark Roe v. Wade decision, and with it take away the access millions of people had to abortion services. But the reality of its demise, which came last Friday, was still a shock to many.

While Americans are grappling with the very real questions it raises about the state of their union, Canadians have plenty to chew on here, too.

First and foremost, there’s our proximity to what increasingly looks like a failing state. Since the Roe v. Wade decision was released, the U.S. Supreme Court has already struck down a ban on concealed handguns in New York state and upheld the right to public prayer in schools, a decision NPR’s Nina Totenberg described as “the latest example of the court's conservative supermajority requiring more accommodation for religion in public schools and less separation between church and state.”

Some Canadians may worry about our courts governing from the bench, but our southern cousins are showing what that really looks like.

Case in point: in a concurring opinion, Justice Clarence Thomas argued overturning Roe v. Wade is just the beginning, and that his colleagues “should reconsider all of this Court’s substantive due process precedents, including Griswold, Lawrence, and Obergefell.” Those decisions cover access to contraception, the legality of same-sex relationships and marriage equality for gay couples, respectively, and date back as far as 1965. One wonders just how far back in time this ultra-conservative Supreme Court is willing to go in its apparent quest to make America great again. Former Canadian Supreme Court justice Rosalie Abella hinted at that last week when she told the Globe and Mail: “I think this is a perfect decision for the 18th century.”

If there’s good news here, it’s that abortion rights are on much firmer ground in Canada. As a recent Maru Public Opinion survey showed, while only 52 per cent of Americans think a woman should be able to get an abortion under any circumstance, that figure rises to 73 per cent in Canada. Stephen Harper understood this math during his 10 years in power when he refused to touch the issue with so much as a barge pole even when he had a majority government. While Canada isn’t without politicians and pundits who support forced birth, they aren’t nearly as numerous or powerful as their peers in the United States.

But when the house next to yours starts burning down, you still have a vested interest in what the flames are doing. These particular embers may not land on our shared roof, but the next ones might. Back in May, the U.S. Supreme Court heard oral arguments on West Virginia v. Environmental Protection Agency, a case New York Times environmental reporter Coral Davenport describes as “the product of a co-ordinated, multi-year strategy by Republican attorneys general, conservative legal activists and their funders, several with ties to the oil and coal industries, to use the judicial system to rewrite environmental law, weakening the executive branch’s ability to tackle global warming.”

A ruling is expected any day, and given the court’s recent track record, it will almost certainly favour the coal companies and their Republican allies. Given the inability of Congress to pass meaningful climate legislation, the neutering of the EPA and its regulatory powers will go a long way toward stalling any progress on this crucial file in America. And as with social policy, those Republicans aren’t about to quit while they’re in control of the Supreme Court. “Coming up through the federal courts are more climate cases,” Davenport writes, “some featuring novel legal arguments, each carefully selected for its potential to block the government’s ability to regulate industries and businesses that produce greenhouse gases.”

So yes, while the abortion rights of Canadians won’t be affected by the U.S. Supreme Court’s decision to overturn Roe v. Wade, the politics that underlie it will still hit — and hurt — Canada.

We need to guard against any attempt by our own conservatives to introduce those politics to our own high court and keep a close eye on Conservative leadership front-runner Pierre Poilievre’s ongoing campaign to denigrate elites and institutions. We need to prepare for the impact that handcuffing the EPA will have on the Biden administration’s climate policies and pledges.

And we need to remember that as bad as all of this looks right now, it could look a whole lot worse after the 2024 election — one that could further entrench the conservative judicial supermajority on the Supreme Court and ensure it lasts for decades to come.

I give no credit to Harper

I give no credit to Harper for not doing nothing on abortion because if he could of he would of done it in a heartbeat, 2nd the Cons are playing the long game, get power appoint incompetent social conservatives to the bench (see knees together judge), then remove Human Rights. 3rd Conservative provincial governments are restricting access and this is where Liberal Party action comes up short to their rhetoric

"...close eye on Conservative leadership front-runner Pierre Poilievre’s ongoing campaign to denigrate elites and institutions. " I completely agree. Given their intransigence in the face of worsening climate chaos the Conservative party is a clear and present danger. We must all become political in order to prevent them coming to power.
Chomsky has said that the Republican Party is the most dangerous organization in human history. ( https://www.bbc.com/news/av/world-us-canada-39879374) To that I'd add that the CPC is the most dangerous organization in Canada.

So finally we have to admit

So finally we have to admit that while we have all scrupulously eschewed "extremism" in all things, including government, that very element has literally become the order of the day. The meme on facebook that "conservatives are going to kill us all" isn't even funny anymore.
COULD THAT BE because the very idea behind religion, that some god or other actually exists is, all by itself, an extreme idea by definition? Is clearly an extraordinary claim to make, entirely in keeping with the idea that Santa Claus lives at the North Pole? This phenomenon is called "hiding in plain sight" and has been deliberately, strategically, and patiently employed by the right wing for decades now, the trojan horse for it being "the economy." The "prosperity gospel" so to speak, that humble set of "beliefs" and "faith" that in America has now replaced the ultimate authority in our evolved rule of law system, an authority embodied by the Supreme Court with an ALTERNATE authority that is "embodied" by the siren song of freedom gone wild--- their imagined God. That level of proxy power as almighty ruler of the world obviously appeals to men far and wide at a base level, so here we are, teetering, but still trying to drag the massive albatross that is religion along with us. This thing on the EPA is horrifying, but again, not surprising.
https://cornwallalliance.org/landmark-documents/the-cornwall-declaration...

I think the Liberals are,

I think the Liberals are, perhaps, banking a little too much on the "they're a whole lot worse than us" argument to keep them at the helm and the barbarians in opposition. Eventually, the pressure (i.e. disillusionment) within the electorate will build to a point that even someone like Polièvre could get his party elected; heaven help us. The LPC must accept that it has some responsibility for ensuring that their behaviour in government doesn't push the opposition (I'm thinking CPC rather than NDP), and its supporters to become even more extreme prior to their takeover of the tiller.

Why on earth is the Liberal

Why on earth is the Liberal Party responsible for THAT along with everything else? The trademark nasty conservative narrative has shown how effective it can be when people expect the federal government to fix even long-standing, highly complicated societal problems, and NOW, while simultaneously berating them at every turn. Not nearly enough recognition has been given of how well we fared as a country, especially compared to our neighbours, during a pandemic that isn't necessarily even over yet.
So voting under the current circumstances has become truly utilitarian when one party has clearly lost its mind and is literally "going for broke" right before our eye as we speak! The agreement with the NDP is a step in the right direction but no credit there either.

Forced birth? It seems the

Forced birth? It seems the USA is nearly there and is firmly on the road to Gilead.