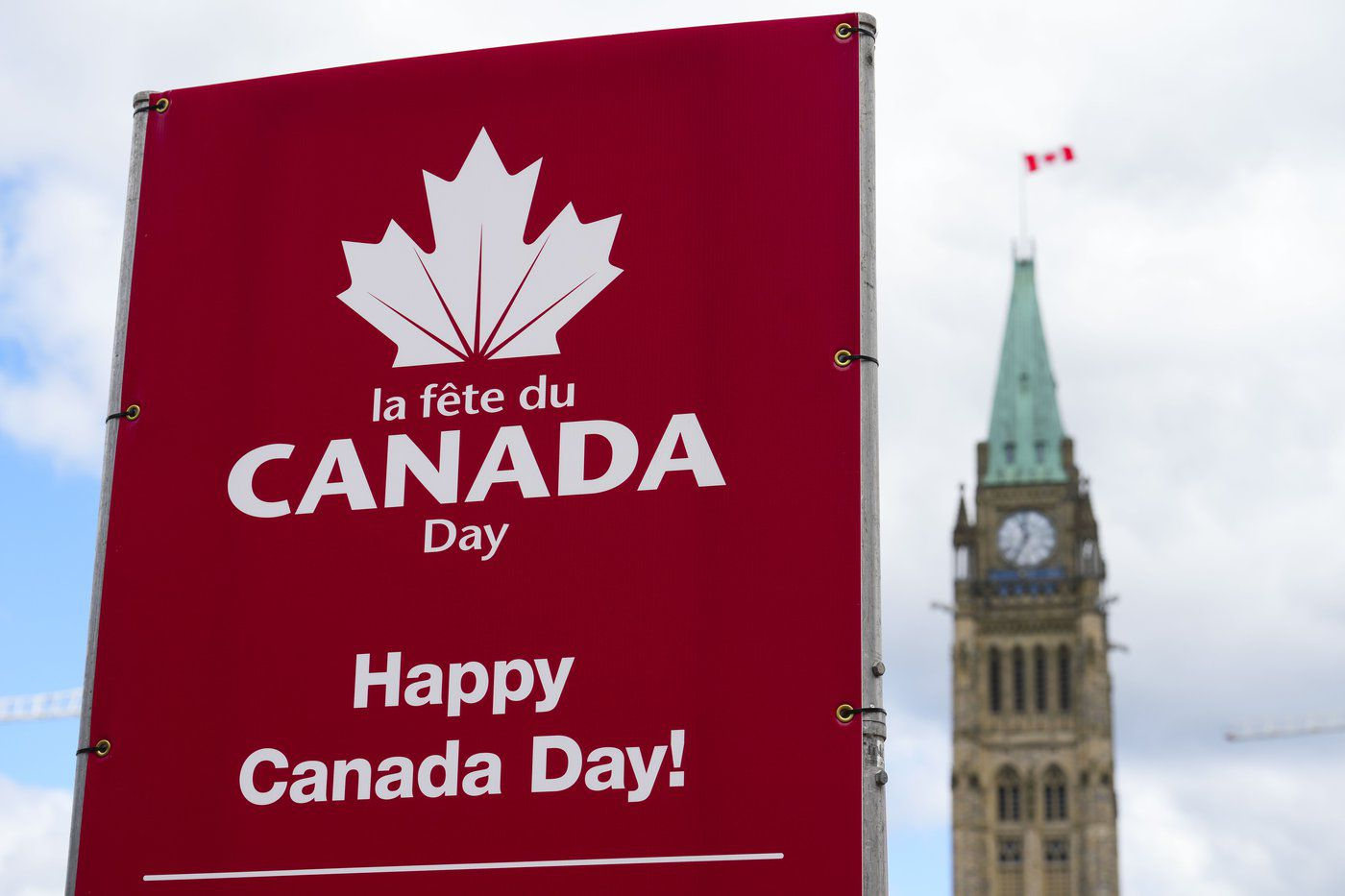 Signs are pictured on Parliament Hill prior to Canada Day, in Ottawa on Monday, June 27, 2022. File photo by The Canadian Press/Sean Kilpatrick
Previous story
Next story

Many communities are reimagining Canada Day celebrations to recognize Indigenous Peoples, as the country continues to reckon with its legacy following the discovery of possible unmarked graves at former residential schools.

“Being Canadian is engaging with these really difficult things,” said Sean Carleton, an assistant professor of history and Indigenous studies at the University of Manitoba.

“Being Canadian, in this moment, does mean reflecting on the history of colonialism and residential schools as a way of trying to establish new, better, stronger relations moving forward.”

Organizers from coast to coast say they are trying to balance celebrations of Canadian pride with reflections on the country’s difficult history with Indigenous people.

Some events were silenced last year amid a sense of collective grief after possible graves were located on the former site of the Kamloops Indian Residential School in British Columbia. More possible graves have been found across the country in the year since.

On Canada Day last year in Winnipeg, thousands of people took to the streets — dressed in orange in honour of residential school survivors — in a demonstration that led to the toppling of Queen Victoria and Queen Elizabeth statues on the grounds of the Manitoba legislature.

This year, organizers of the big Canada Day celebration at the Forks — an important site for Indigenous peoples in downtown Winnipeg — have renamed the event “A New Day,” cancelled fireworks and promised events that are to be reflective as well as celebratory.

The decision has been controversial locally, but Carleton praised organizers for listening to what Indigenous people in the city requested.

The holiday itself is recent. Canada Day was created in 1982 to replace Dominion Day, which celebrated Confederation and Canada’s connection to the British Empire and the imperial project.

Carleton said national holidays are an opportunity to continually define who we want to be as Canadians and don't have to be static.

In developing plans for Saskatoon, Canada Day project director Shad Ali started by looking at the Truth and Reconciliation Commission’s recommendations and consulting with Indigenous partners. He was encouraged to use the holiday as an opportunity to educate people about the country’s true history.

Increasing awareness about injustices helps build the nation that Canada should be, Ali added.

“I want that to be a nation that remains strong and free, a nation that we want to stand on guard for,” Ali said, holding back tears. “That’s the place I, as an immigrant, chose to make my life in.”

Organizers in Vancouver have renamed their event "Canada Together" and adopted the theme "weaving together the fabric of a nation." The intention for the day is to gather, celebrate, learn and share.

The 36th annual event at Canada Place at the Port of Vancouver often included Indigenous programming in the past, but this year organizers worked collaboratively with representatives from the Musqueam, Squamish and Tsleil-Waututh Nations to create the day's events, said Gillian Behnke, manager of community relations and events with the Vancouver Fraser Port Authority.

"We had a lot of support from the local nations. They said: 'Yes, we see this as an event that should go forward, but with a different intention,'" she said.

Last year, events were cancelled and residents were encouraged to use the time for reflection.

Copage-Gehue, who is Mi'kmaq from Sipekne'katik First Nation, said this year's event is a chance to interact with peace and friendship — the true intent of the original treaties.

"It's an opportunity to learn from our collective tragic pasts … and how we can move together forward and make this a better place for our Indigenous and settler communities to live together."

Education about colonialism and residential schools must be included in any Canada Day event, said Lisa Howell, a professor at the University of Ottawa and one of the organizers of the Reimagine Canada Day project.

The project was developed by educators and Indigenous members after the discovery of the possible graves and provides a self-guided tour around Ottawa to learn about the country’s history.

“There’s a myth among Canadians that colonialism is something in our past and that myth stops us from understanding the inequities and injustices that are ongoing today,” she said.

Howell said people can continue to take pride in being Canadian. But they must also recognize that building a better and more equitable relationship with First Nations, Inuit and Métis people is part of that identity.

This report by The Canadian Press was first published June 30, 2022.