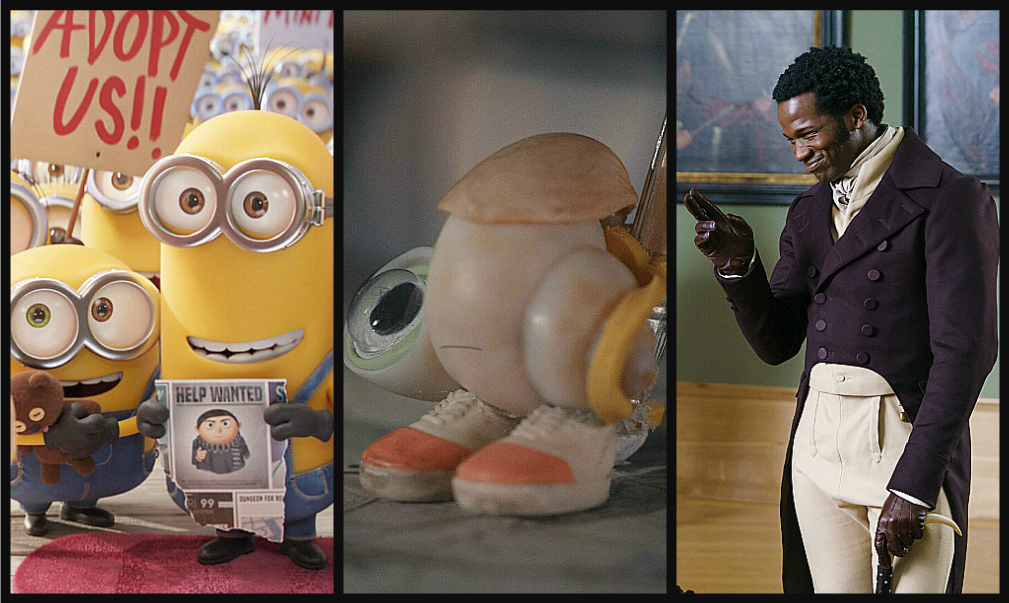 Also: current world events foreseen in a thriller and and life in Paris as we rarely see it
Previous story

Look at that. It's Canada Day and I don't have a new Canadian film to write about today. The next one is coming via VOD on Tues and I'll have it next week. You could check out Slash/Back the Inuit teens vs space aliens film. It's still playing. So is David Cronenberg's Crimes of the Future.

Better yet check out the documentaries the National Film Board has for you. Not long ago they added the beautiful film Kímmapiiyipitssini: The Meaning of Empathy, by Elle-Máijá Tailfeathers. She watches her mother help drug addicts in Alberta with harm reduction which she learned in Vancouver. It and many others are streaming for free from NFB.ca.

And elsewhere we have these:

Minions The Rise of Gru: 3 stars

Marcel the Shell With Shoes on: 4 ½

Passengers of the Night: 2 ½

MINIONS: THE RISE OF GRU: You get what you come for, but not all of it. This is the 5th in the Despicable Me series so you know what to expect. The animation is spectacular, the action is vibrant and the humor is as cheeky as before. So what's the problem then? The filmmakers have stuffed in so much action, much of it absolutely frenetic, that there's little room for the charm that's been there since the first film. The kids won't mind, but I suspect even they would respond to a more emotional story line. And how many will get even a few of the many references to the 1970s, like Jean-Claude Van Damme voicing a thug named Jean Clawed and, once again, acting alongside Dolph Lundgren.

But this is an origin story. Gru (still voiced by Steve Carell) is only a 12-year old back in 1976. He announces in school that his ambition is to be the world's greatest villain. He applies to join a gang he idolizes, the Vicious Six, and is offended when he's rejected as just a “tubby little tot.” He sets off on his own way, unites with The Minions who seem to have answered a help-wanted ad, manages to steal a mystical amulet from the gang, ally with a biker and get Kung Fu lessons from a Chinatown matron (Michelle Yeoh). See how the story swells too far? There's Blaxploitation in there too, plus a trip to the Bank of Evil, to the gang hideout beneath the store, Criminal Records, and helping the gang's original founder (Alan Arkin) who was tossed out by the new leader (Taraji P. Henson). The cast and the many 70s musical choices are strong; the story is not so much. (Theaters all over over) 3 out of 5

MARCEL THE SHELL WITH SHOES ON: This partially-animated film is everything that the new Minions isn't. It's endearing, touching, emotional and very, very clever. But it didn't have to stretch to get there. It's simply a small story told with sincerity about community and one creature's distress when he loses it. Marcel is a mollusk who lived with family and friends in a house that was sold when the owners divorced. It's now an airbnb. Except for his grandmother (voiced by Isabella Rossellini) he's lost track his family, wants to find them and among the surprises is how he tries.

Filmmaker, Dean Fleisher-Camp and his former wife, Jenny Slate created the character for a short film ten years ago. It went viral; they made more and wrote a book and now expanded it into a feature. They star in it too; she as the voice of Marcel, sounding like a very world-aware grandchild; he as a filmmaker who stays in the airbnb and listens to his story. Marcel and gran were fans of TV's 60 Minutes and surprise, Leslie Stahl and a TV crew arrive to interview him. It's whimsical, sure, but also playful, mischievous and deeply heartfelt. Marcel just wants to get back to a “place that I'm part of the whole … connected to everything.” (In theaters in Toronto, Vancouver and Montreal) 4 ½ out of 5

ATTACK ON FINLAND: Every once in a while there's a film that's super timely. Finland just this week got a way to apply for NATO membership. That happens to be the subject here though, coming from a novel, it's pure fiction. Well-predicted, though because there's also Russia's objections which Putin grumbled about again just days ago. The story is pre-Ukraine war but touches on much still going on. There's a call for tighter sanctions on Russia because of cyber-attacks. No its not a documentary, it's a potboiler thriller made by Finnish filmmakers who seem to have watched American films do this type of thing. Aku Louhimies is a top director and Jasper Pääkkönen is a top actor. He's been in a couple of Spike Lee films too.

Finland's Independence Day gala is attacked by terrorists. They take hostages from among the highest profile guests, including the president. Pääkkönen plays an agent sent to negotiate and find out who is behind the attack.

Also involved is a character with a personal grievance (Sverrir Gudnason, who once played Björn Borg). He wants his father released from prison, and incidentally money (300 million Euros in cryptocurrency) and a plane to take him to Belarus. So who is responsible? The story is good but gets a bit cloudy on that matter. Two women help roil things up: Nanna Blondell as an agent front the west and Nika Savolainen as a Russian spymaster. The action is strong and the film has a lot right including that Finland is feisty and Europe is fragile. (VOD and in theaters) 3 ½ out of 5

MR. MALCOLM'S LIST: Calling all fans of Regency-era novels like those of Jane Austen or the current series Bridgerton, check this one out. It's not old but it matches them all the way. It's got all the tropes you're familiar with, including the machinations to spread or earn love, the grand houses and rich dinner parties and the enourmous back lawns of the English upper class. And does one thing that's probably out of character for a tale set in the early 1800s. It feels rather politically correct for our age. The characters we watch are not the usual white-only gentry: there are blacks in here, including the title character, an Asia or two and a Chinese woman. They fit in perfectly.

Malcolm (Sope Dìrísù) is a large landowner, a batchelor or, according to some women, "the biggest catch." But he has high standards as expressed in a list he's made up of the attributes he says are mandatory in any woman he may decide to marry. Musical ability and a forgiving nature are just two of them. One woman (Zawe Ashton) failed and felt humiliated. She plots revenge by calling in her long-time friend (Freida Pinto), coaching her and then turning the tables on Mr. Malcolm. Doesn't work out that way. The story echoes others but keeps you engrossed anyway, the settings and the dinner parties are grand and the side characters are interesting. But the two at the centre are so nice they're kind of bland. Very good acting though, from all. And note that all the main creative people, from director Emma Holly Jones on down, are women. Filmed in Ireland. (In theaters) 3 ½ out of 5

THE PASSENGERS OF THE NIGHT: You expect a lot more drama to break out in this French film. As it is, we get a portrait of a group of people who have their challanges but really only have everyday life to negotiate. A reading at the very end underlines it: the people you meet in life are only fragments, "smatterings". The effect we have on each other is fleeting "like fragile shadows in old forgotten bathroom mirrors." True enough but not compelling drama.

This one is like a visit with ordinary people being unexceptional. Charlotte Gainsbourg is the mother; her husband has left, her two young-adult children have not and she manages to get a job at an all-night radio show. She has to answer calls, screen out any nutbars and pass the others to the host (veteran actor Emmanuelle Béart). Working women will sympathize with her early mistakes. Then she meets a street kid, an on-again, off-again addict (Noée Abita) and takes her home. She also takes a radio guy home. Her son has sex with the girl, she with the colleague and and life goes on. There more than that but it is how this film goes. It's easy going and unagitated. Mikhaël Hers directed. Family dynamics in Paris seems a specialty. (Art house theaters) 2 ½ out of 5