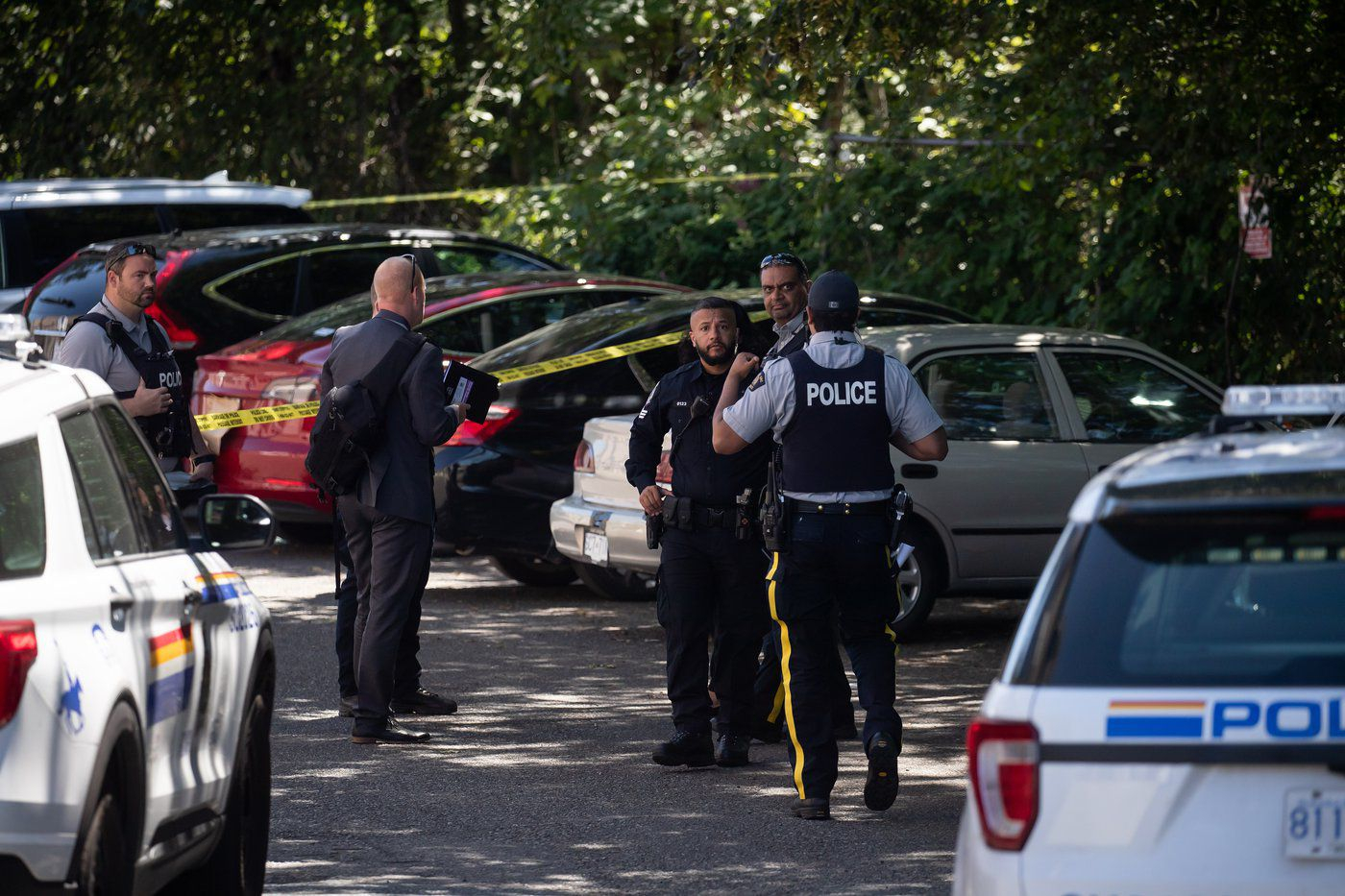 RCMP and Surrey police officers work at the scene of a shooting near a red Tesla vehicle, back, in Surrey, B.C., on Thursday, July 14, 2022. Photo by The Canadian Press/Darryl Dyck
Previous story
Next story

Ripudaman Singh Malik, one of two men acquitted in the 1985 Air India terrorist bombing, has been killed in a targeted shooting in Surrey, B.C.

The Integrated Homicide Investigation Team released a statement Thursday confirming Malik's death, saying the shooting appears to have been targeted and there was believed to be no further risk to the public.

An employee who works at a nearby car wash said he heard shots on Thursday morning and ran outside to find Malik unconscious in his red Tesla.

"There were three gunshots. One hit him on the neck, that's it. And I just took him out. He was alive," said the man, who didn't want to be named because of safety concerns.

Police arrived in about 10 to 15 minutes, he said, and an ambulance took longer.

The man said he knew Malik as a customer at the car wash and because he had a business nearby.

Jaspreet Malik said in a statement on social media that his 75-year-old father came to Canada in 1972 and was committed to his community and family, including his wife, five children and eight grandchildren.

"The media will always refer to him as someone charged with the Air India bombing," Malik said. "The media and RCMP never seemed to accept the court's decision and I pray today's tragedy is not related."

Sarj Basra, owner of the Auto Shine Car Wash and Detail, wasn't at work when the shooting happened but said it's upsetting and scary that something like that would happen in their neighbourhood.

"Someone we know has passed away to violence," Basra said.

"He was always joking. You know, always coming in here, talking to us, standing around," he said, adding many of Malik's vehicles were serviced at his business.

Asaf Gill, who owns a carpet business, said he had an appointment with Malik about a half-hour before he was killed.

"But then I come here and find this," he said of yellow police tape that surrounded the scene where a tight-knit business community was in shock.

The homicide team's statement asks for the public's help in solving the case.

“We are aware of Mr. Malik’s background, though at this time we are still working to determine the motive," Sgt. Timothy Pierotti said.

He said that because the shooting took place in a residential area, they are confident that witnesses exist that could help solve the crime.

RCMP said shortly after the attack that a vehicle believed to be used in the shooting was found engulfed in fire a few blocks away.

Malik and his co-accused, Ajaib Singh Bagri, were found not guilty in March 2005 of murder and conspiracy in a pair of Air India bombings that killed 331 people on June 23, 1985.

B.C. Supreme Court heard during the trial that a suitcase bomb was loaded onto a plane at Vancouver's airport and then transferred in Toronto to Air India Flight 182.

The aircraft crashed into the Atlantic Ocean off the coast of Ireland, killing 329 passengers and crew. About an hour later, a bomb destined for another Air India plane exploded prematurely at Tokyo's Narita Airport, where two baggage handlers died.

Inderjit Singh Reyat, the only man convicted in the bombings, testified for the Crown at Malik and Bagri's trial, and was later convicted of perjury.

Deepak Khandelwal of Oakville, Ont., was 17 when his sisters, 21-year-old Chandra and 19-year-old Manju, were killed when Flight 182 fell from the sky.

"It's like a nightmare that never stops giving," he said about the many years it took for the trial to start, the missteps made by police during the investigation and an inquiry into Canada's worst mass murder.

"It just brings back all the horrible memories we've had to go through for the last 37 years," said Khandelwal, whose family was living in Saskatoon when the bombings happened.

"I was supposed to be on the flight as well," he said. "I actually just cancelled a couple of days beforehand because I was finishing Grade 12 and got a scholarship to go to a program at the University of Calgary. And so, I chose to do that instead of going to my uncle's wedding."

Khandelwal and other families who are part of the Air India Victims' Families Association, said the Canadian government failed to provide them with the support they needed after the deaths. Most of the victims were Canadian citizens.

"I would just hope that the Canadian government and government agencies can do a better job," he said.

Former prime minister Stephen Harper issued a formal apology in 2010, saying families were not treated with respect following the worst terrorist attack in aviation history until the 9/11 attacks in the United States in 2001.

Rob Alexander of Hamilton was 15 when his father boarded Flight 182 to visit his mother in India.

Alexander was supposed to go with his dad, Dr. Mathew Alexander, a cardiac surgeon, who was booked on an Air France flight before switching to Air India because it turned out to be cheaper.

Alexander said he's grappling with how to deal with hearing about the death of Malik.

"It's a very weird feeling to describe. Because in the end, we've gone through all the hurt and trauma and we had no support from the government over the years," he said.

Alexander and other families credit the residents of Cork, Ireland, who supported them as they arrived to identify the bodies of their loved ones.

Families did not hear for days that everyone on board had died. Alexander said he believed that his dad was busy helping people as a 40-year surgeon who was "just getting into his stride and was very well respected in his community."

This report by The Canadian Press was first published July 14, 2022.