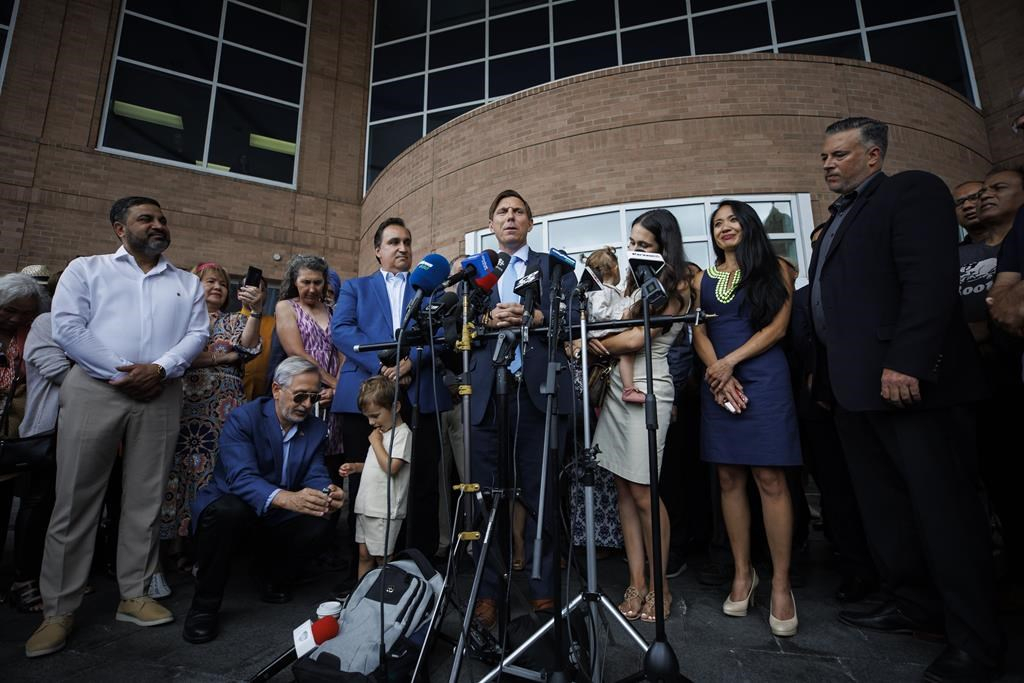 Brampton mayor, Patrick Brown, speaks during a press conference to announce his intention to re-run for mayorship, at city hall in Brampton, Ont., on Monday, July 18, 2022. Photo by: The Canadian Press/Cole Burston
Previous story

Weeks after his bid for the federal Conservative leadership came to an abrupt end over allegations of wrongdoing, Patrick Brown announced Monday he will seek to stay on as mayor of Brampton, Ont., officially throwing his hat in the the ring for the fall municipal election.

Brown, who has served as mayor since 2018, had previously said he would consider seeking re-election if it seemed like he couldn't win the federal leadership.

However, he insisted Monday that entering the local race shouldn't be seen as his backup plan.

"It's always been about serving Brampton," he said in a news conference outside city hall. "What I could have done for Brampton on a national level is obviously much more significant than you can do on a on a local level.

The municipal election is scheduled to be held on Oct. 24 and the deadline for registering as a candidate is Aug. 19.

Earlier this month, the federal Conservatives' leadership election organizing committee said Brown was disqualified based on allegations related to an apparent breach of the financing rules in the Canada Elections Act.

Brown has denied the allegations, and did so again Monday. He has also taken steps to appeal the party's decision to remove him from the leadership race.

The Ontario politician is also facing trouble locally, after a majority of city councillors recently voted for a series of forensic investigations, including into how contracts were given to firms involved in an effort to bring a full university to Brampton.

In a report issued in May, the city's interim chief administrative officer found that $629,000 went to four vendors involved with the project, but staff were unable to find the final product for five of the "deliverables" identified in the expenses.

Disqualified from the Conservative Party leadership race, Patrick Brown is making another run for the Brampton mayor's chair. #cdnpoli

A group of five councillors pushing the investigations has said the bulk of the money went to one firm, which employed a close associate of Brown.

Brown has said those councillors form a block that is critical of him, and the two factions have been at odds over an ongoing controversy at city hall.

Asked Monday whether he would allow the investigations to go ahead if re-elected, Brown would not give a clear answer.

Brampton Coun. Jeff Bowman, who is part of the group supporting the audits, said he wasn't surprised to see Brown deflect questions on the issue.

"He won't give you a straight answer, but we're trying everything in our power to make sure that all these investigations come forward prior to the election so that we've got everybody ... fully educated and aware of who they're voting for and what they stand for."

While Brown is now turning his attention to Brampton, "where's his focus been since January when he originally planned to take the CPC leadership?" Bowman said. "That's why we said Brampton has been without clear leadership for six months."

Brown stepped down as leader of the provincial Progressive Conservatives in early 2018 amid sexual misconduct allegations that he denies.

He then sought to run for regional chair in Peel, but Premier Doug Ford eliminated the position in the summer of 2018, just months before the vote. Brown then immediately announced he would run for mayor of Brampton instead.