How heat waves and urchins stress out kelp forests 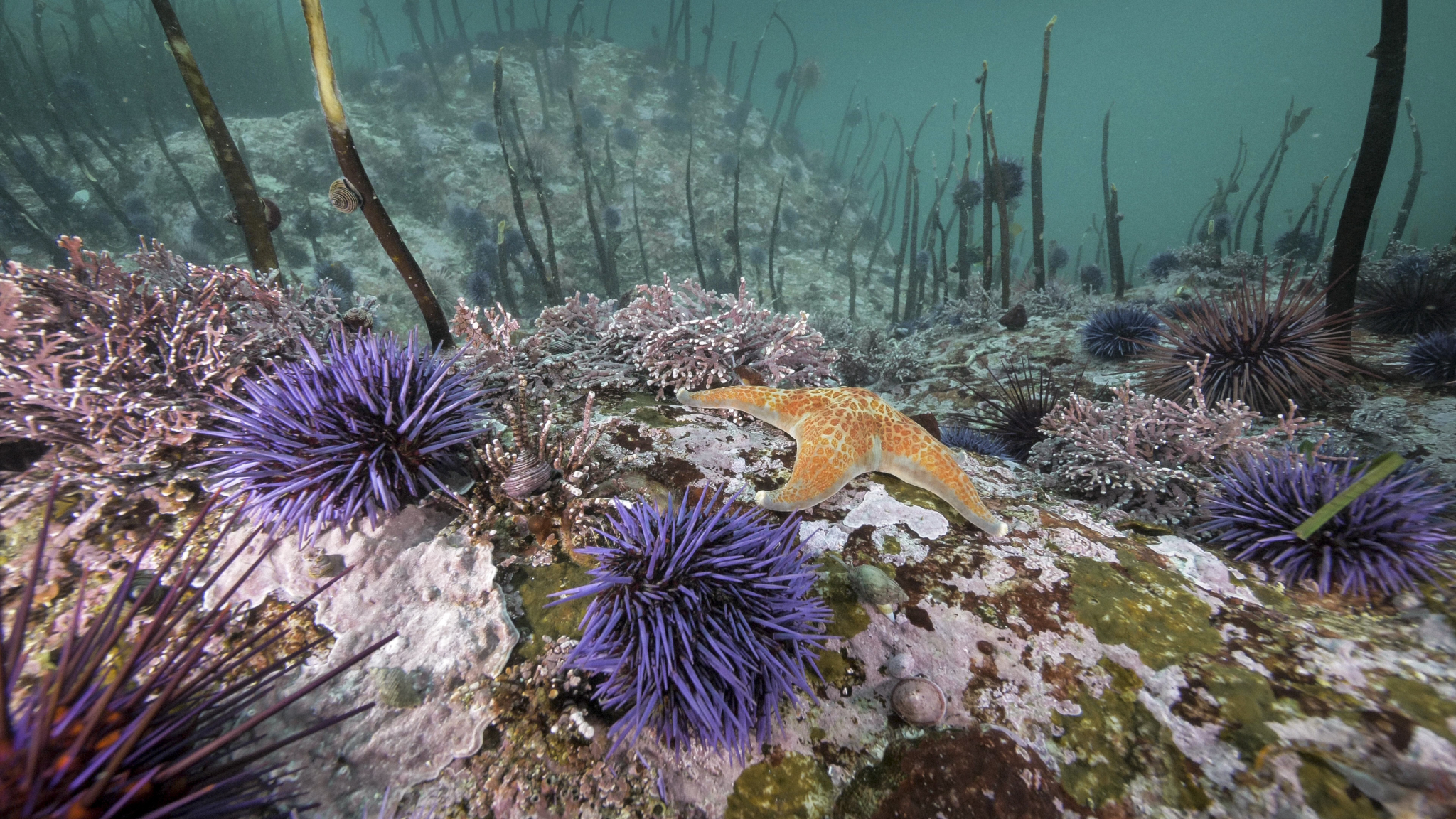 The Blob, an extreme marine heat wave that hit the northeast Pacific, severely affected some kelp forests but not others. The complicating factor seems to be how the heat affected sea star and urchin populations. Photo by Grant Callegari/Hakai Magazine
Previous story

Marine heat waves are becoming a major threat to key coastal habitats. The longest marine heat wave on record, known as the Blob, hit the northeast Pacific Ocean between 2013 and 2016. Ever since, scientists have been working to unravel its effects, which include killing thousands of birds, bolstering jellyfish numbers, and spurring the proliferation of harmful algae that poisoned marine mammals.

One crucial marine habitat affected by the Blob was the kelp forest. Scientists have previously noted that kelp forests had a mixed response to the Blob. Near the southern limits of their range, large numbers of kelp died, while farther north, the damage varied: some kelp forests were unaffected, others severely hit. Now, a new study shows that, in some areas, environmental factors amplified the heat wave with devastating effects. The study explains why all of the kelp forests hit by the Blob didn’t respond the same way, showing how being just a few kilometres apart can make all the difference.

Coastal British Columbia was in the middle of the Blob’s range. Sprinkled with myriad fjords, bays, and inlets, the area is full of highly varied microenvironments. Samuel Starko, a marine biologist at the University of Victoria, thought these regional variations could explain the diverse effects of the Blob. To prove it, he and his colleagues headed to Barkley Sound on the west coast of Vancouver Island.

Barkley Sound is dotted with islands, each of which lends the kelp living nearby a slightly different environment. Surveying the populations of two kelp species throughout the sound, Starko and his colleagues compared their distributions with decades’ worth of records from before the heat wave.

Overall, kelp disappeared from 40 per cent of surveyed sites. But there were huge variations. At sites more than eight kilometres inside the sound, where the water temperature rose by up to 5 C more than it did in parts of the outer coast, most of the kelp was killed. In the half of the sound closer to the open ocean, kelp populations were largely unaffected. While this shows that temperature stress was the main driver of kelp die-off, the overall picture was more complex.

As well as killing kelp, the high water temperatures associated with the Blob encouraged the spread of sea star wasting disease. During the Blob, the sunflower star was nearly wiped out. This caused the population of urchins, which sunflower stars eat, to boom. In Barkley Sound, urchin numbers increased as much as 10-fold in many places.

Even within the warm inner parts of the sound, however, some of the kelp managed to survive in deeper, cooler water, but only if the sea urchins were absent. Where the bottom substrate was rocky, these deeper kelp forests were devoured by urchins. But if the kelp was attached to stones in an area that was largely sandy — a substrate that urchins tend to avoid — kelp managed to hang on. This meant that even in the hotter inshore water, kelp did manage to cling on if it was in a deeper forest in a sandy area. “It is really this interactive effect of temperature and urchins that are driving the dynamics,” Starko explains.

Even though it’s been a few years since the Blob waned, kelp forests decimated by the heat wave have yet to recover. Some have even experienced further losses. Persistent high temperatures, and another marine heat wave from 2019 to 2020, have not helped. The sea stars’ recovery has also been very limited, Starko says, and urchins have continued to be a major problem for many kelp forests.

Nora Diehl, who researches European kelp populations at the University of Bremen in Germany and who was not involved in the new study, says Starko’s findings are similar to what she has seen in her own work. Diehl has observed large differences, for instance, between the morphology of kelp in still bays and in very exposed bays, which can affect its response to environmental stress.

While there appear to be important tipping points in water temperature beyond which kelp cannot survive, populations can have different responses to heat waves due to a wide range of ecological factors, Diehl explains.

“As well as population differences, we also have seasonal and interannual differences in response to heat waves and the survival of the kelp,” she adds. “This shows how complicated it really is to forecast what happens to kelp in the future.” Despite the complexities, it is clear that higher temperatures and more sea urchins result in fewer kelp and kelp forests, she says.

I read somewhere that in some

I read somewhere that in some places sea otters are compensating somewhat for the lack of the stars, because they also eat urchins.