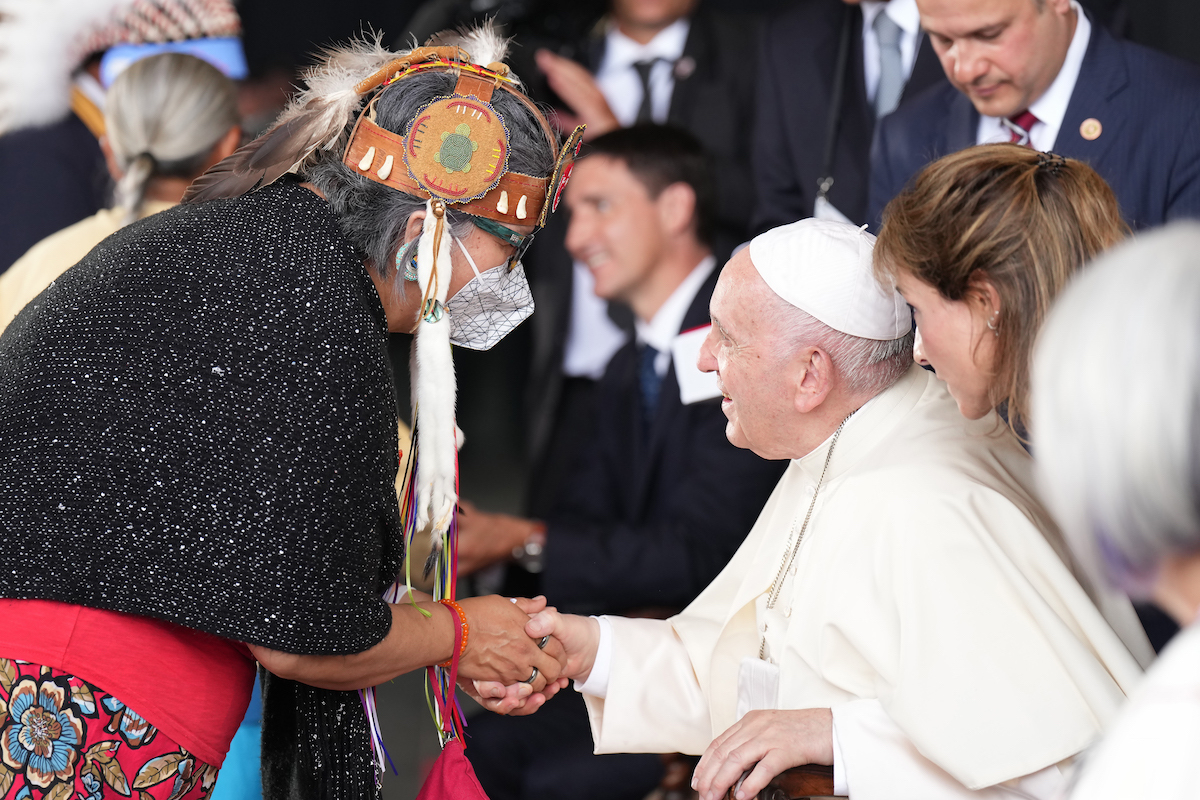 Pope Francis is greeted by RoseAnne Archibald, national chief of the Assembly of First Nations, as he arrives in Edmonton on Sunday, July 24, 2022. THE CANADIAN PRESS/Nathan Denette
Previous story

Canada’s National Observer spoke with National Chief RoseAnne Archibald of the Assembly of First Nations about a whirlwind week of apologies, masses and next steps towards reconciliation.

This interview was condensed and edited for clarity.

Can you begin by giving me your reflections and impressions of the week that just passed?

It just feels so raw. Emotions are so high, especially for our survivors who were in these institutions. It just feels like an emotionally intense time. I felt like that in this journey as national chief and as an intergenerational survivor myself.

Did you have any conversations with the Pope? What were they like?

I only had one opportunity to talk to him, and that was at the airport [in Edmonton last Sunday].

I welcomed him first of all because I promised him if he did come to Turtle Island, I would meet and welcome him on behalf of all nations.

I told him I looked forward to hearing his apology and walking the healing path forward with him and the Church. I also asked him to revoke the Doctrine of Discovery. I asked not only for myself as national chief, but for many national chiefs before me.

Did you get any sense of sincerity or response from him after you said those things?

"As an intergenerational survivor, I know these words are just words. What really counts is changed behaviour," says National Chief RoseAnne Archibald of the Assembly of First Nations. #PapalVisit #TRC #Reconciliation

No, he didn’t actually say anything. The interpreter beside him was simultaneously interpreting my words for him. He didn’t say anything like yes. He just shook my hand and gave me a coin. [laughs]

That’s exactly what we all saw on TV [laughs]. Now, this is a visit about survivors most of all. What’s the general feeling from survivors given the conversations you’ve had?

There isn’t one thing to say about this papal visit that everyone would agree on. I believe it’s because it’s so complicated, it’s so multi-layered, it’s multigenerational.

Everybody’s experience was traumatic in terms of these institutions of assimilation and genocide. Everybody had different experiences and how they rolled out into their families for generations are unique to each family.

When Pope Francis leaves, there are a lot of questions about next steps. What are your thoughts on the specific questions Indigenous Peoples have asked of the Pope?

There’s more steps. As an intergenerational survivor, I know these words are just words. What really counts is changed behaviour. The apology is not even a full step; the full step is when your foot hits the ground and you start doing things.

They have to rescind the Doctrine of Discovery. This papal bull is what encases our society, it’s what has normalized the mistreatment of Indigenous Peoples in Canada and around the world. People need to know Indigenous Peoples are valuable, are worthy of our own languages, our culture, our self-determination. We are worthy of having a safe space where we can raise our children. This doctrine says we’re zero, we don’t even exist, Terra Nullius, the land is empty. Except it’s not empty: we’re here, we’re still here.

Another thing is the records. We don’t know the names of the unmarked graves. The Church has those records that will help us heal and give those children proper ceremonies.

Is there a specific moment that stood out to you on this visit?

There were many moments. Two of them involved women.

The other was when [Si Pih Ko] was singing a prayer song. That was a really visceral moment, and she was almost right in front of me, and I was so moved by her strength and ability to stand in that moment with such emotion but to still sing that song. I felt that was a really healing moment for her and all of us.

What is needed is for the

What is needed is for the Vatican to make reparations in the only world that matters ... the real one. Next time leave the spiritual leader out of it and send the divine Chief Financial Officer with the holy cheque book.

You'd better make that cash! the holy cheque book has not always been wholly honest with you before!