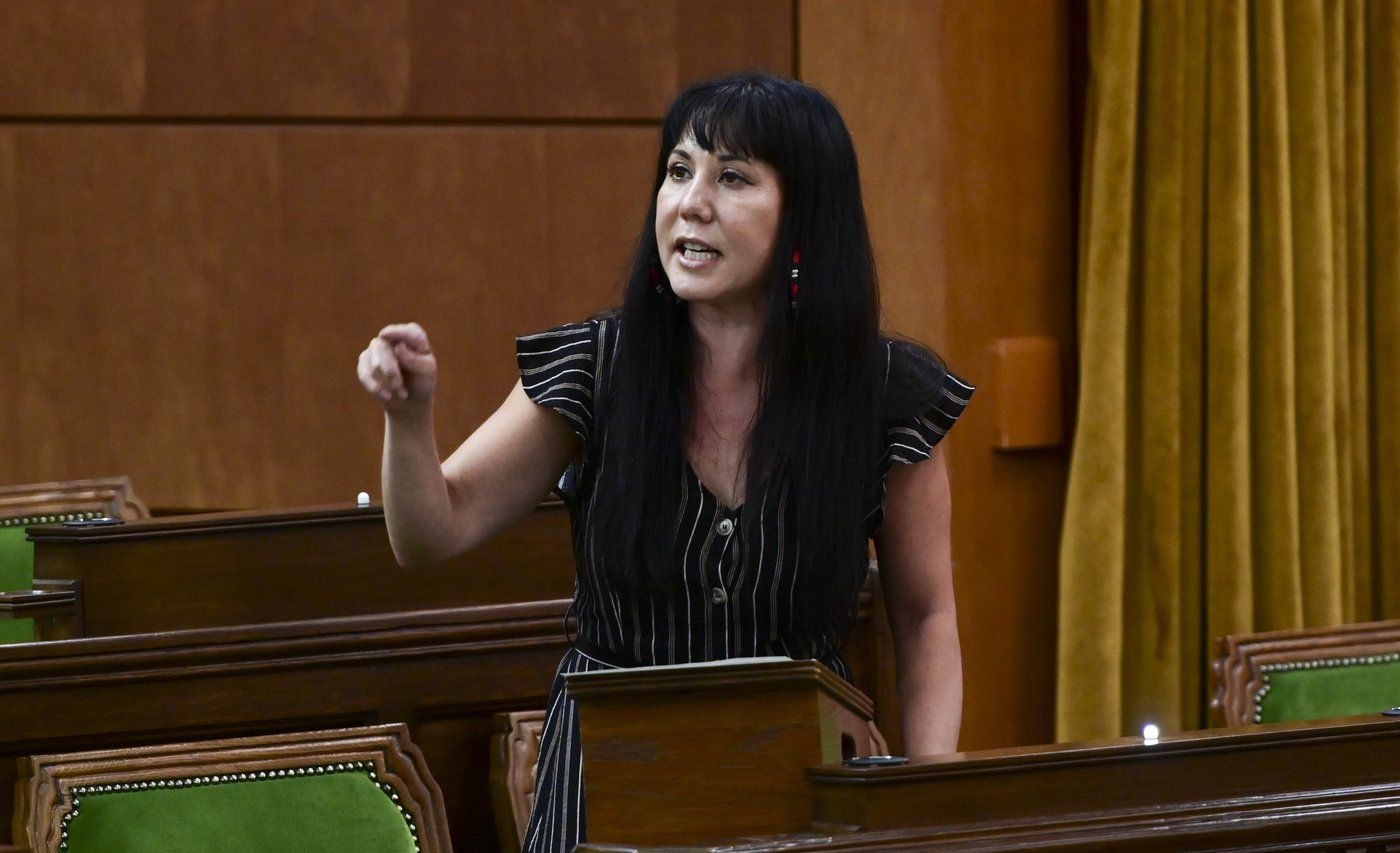 Leah Gazan rises during question period in the House of Commons on Parliament Hill in Ottawa on Monday, June 21, 2021. File photo by The Canadian Press/Sean Kilpatrick
Previous story

A New Democrat member of Parliament said Tuesday she hopes all of her colleagues will recognize the residential schools system as genocide, now that Pope Francis has used the term.

Leah Gazan, who represents Winnipeg Centre, tried last year to get unanimous consent from MPs in the House of Commons to press the Canadian government to call what unfolded inside residential schools a genocide.

Her motion referred to the United Nations convention on genocide adopted in 1948, which defines genocide as killing members of a group, causing them serious physical or mental harm, placing them under conditions to destroy them, imposing measures to prevent births or forcibly transferring children to another group.

Gazan said at the time that Canada's residential schools policy met all five criteria, but some voices in the House of Commons said "no," so her motion requiring unanimous consent failed.

"Having the experience of residential school survivors continually up for debate is another act of violence," Gazan, a member of Wood Mountain Lakota Nation, said in an interview Tuesday.

"We need to be mindful of that."

The 2015 final report from the Truth and Reconciliation Commission of Canada labelled what happened inside residential schools a "cultural genocide," but some Indigenous leaders have since said it needs to be called a genocide, without the qualifying adjective.

During his six-day visit to Canada last week, Pope Francis apologized multiple times for the "evil" of what happened inside residential schools. But it was not until the Pope was asked about it by reporters on the flight back to Rome that he said he considered it to be a genocide.

Francis said he felt "genocide" was a technical term, when asked why he did not say it in Canada.

In a statement Tuesday, Crown-Indigenous Relations Minister Marc Miller's office said it was encouraged "that Pope Francis’ thoughts evolved over the course of his trip."

"He heard poignant, painful and direct testimony from survivors and their family members as they courageously shared their truth," it said.

More than 150,000 First Nations, Métis and Inuit children were forced to attend these institutions, which the federal government funded and different churches operated for over a century. The Catholic Church ran the majority of the residential schools in Canada.

Thousands of Indigenous adults who were sent there as children have reported rampant physical, sexual and emotional abuse, along with neglect and malnutrition. The National Centre for Truth and Reconciliation maintains a memorial register for students who died at residential schools and that number is now at 4,120 children.

Gazan presented her motion in June 2021, not long after the Tk'emlúps te Secwépemc Nation announced that ground-penetrating radar had located what appeared to be the remains of about 200 children buried on the site of a former residential school in Kamloops, B.C.

She said she is now planning to present another motion, but is still thinking about what it should say while the House of Commons is on its summer break.

"I hope that, you know, particularly members of Parliament who are really committed to reconciliation, committed to justice, will finally recognize what happened in residential schools for exactly what it was, which was a genocide.

"It's time for Parliament to acknowledge it as a genocide."

The Native Women's Association of Canada said there is much left to do following the papal tour and apology.

"That starts with the government recognizing that what happened to Indigenous children in this country’s Indian Residential Schools was a genocide," its CEO, Lynne Groulx, said in a statement, adding it was unfortunate Gazan's motion failed.

Upon the discovery of unmarked graves last year, Prime Minister Justin Trudeau said he continues to accept the conclusion from the 2019 inquiry into missing and murdered Indigenous women and girls that "what happened amounts to genocide."

Jamie Schmale, Conservative Shadow Minister for Indigenous Services, said in a statement that the Pope's visit wasn't about politicians or politics, but was about healing and reconciliation.

"It was important for Pope Francis to acknowledge and take responsibility for the Church's actions, including recognizing that removing children from the influence of their homes, families, and traditions, in an effort to erase their culture amounted to a genocide," Schmale said, noting that Conservatives would continue to support healing and reconciliation.

“Reconciliation, healing and forgiveness is personal and different for each person. It is important that we allow First Nations, Inuit, and Metis people to respond to the visit in their own way, and in their own time."

Some of those running for the Conservative party's leadership also responded when asked whether they see the residential school system as genocide.

"Residential schools were a monstrous attack on Indigenous people and an odious intrusion of the state and the church into the lives of innocent people," leadership candidate Pierre Poilievre said in a statement.

He pointed to the fact that both the inquiry into missing and murdered Indigenous women and the Truth and Reconciliation Commission of Canada used the terms "genocide" and "cultural genocide."

"I accept and agree with these findings."

A spokeswoman for fellow candidate Jean Charest said he agreed with the finding that residential schools amounted to a "cultural genocide."

Rural Ontario MP and leadership contestant Scott Aitchison said Pope Francis' recognition of the system as a genocide "is an important step in reconciliation."

Leslyn Lewis' campaign declined to provide comment and Roman Baber did not respond.